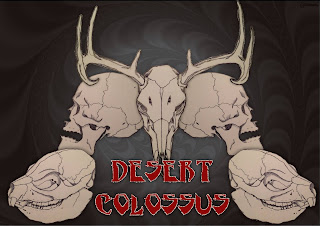 Do you sometimes yearn for the simpler foot to the floor desert/stoner grooves of Kyuss, Hermano, and their like, when the punk music of the late 70's merged with the hard rock of the earlier end of that era and resulted in a glorious amalgamation of fuzz and fury married to melody and musicianship? Well look no further! 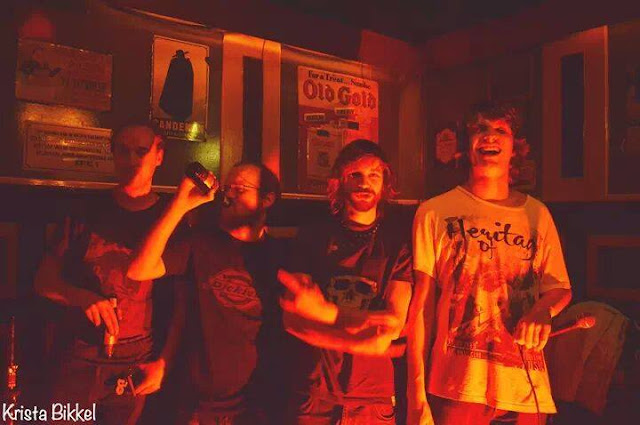 Desert Colossus hail from Zaandam, Netherlands and are a four piece made up of Frank Zoomer - Vocals Guitar, Frank Fey - Drums, Tom Collé - Bass and Leon van Wijk - Guitar and deal in a blend of desert rock very much influenced by the Palm Springs desert scene as well as more recent bands such as Red Fang and QOTSA as can be evidenced on their self titled debut album. 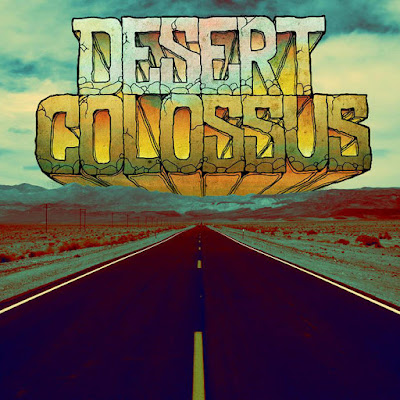 "Golfshoes" kicks things off with a straight no chaser, fuzzed to the max slab of punked up, adrenaline charged groove with vocals sitting within the clean shouty rap meter that was the trademark of  the early skater punk/stoner bands of the late 90's. Frenetically paced and sounding not unlike something from a Fu Manchu/Nebula back catalogue this tune races through 2:35 as if it's life depended on it!
This style of 90's stoner groove repeats itself through the next three songs "Whatt!", "Pariah" and "Fat Chicks",  all are good hard rocking numbers and all are stamped with that solid desert sound and punky groove that once echoed out of  Palm Springs  but it is on the albums fifth track that the band really come to life.
"Surrender The Void" is a mid-paced and heavy riff monster with a doom-lite
edge to it. Lengthier than the previous tracks the band use this bigger canvas to flex their musical muscles and paint pictures that are a little darker and deeper than before. Zoomer's vocal takes on a world weary tone that fits perfectly with dense riffage and slower rhythmic pulses. The song goes into a full blown jam in the last quarter with  guitarists van Wijk and Zoomer contributing a myriad of riffs, solo's and licks over a solid wall of rhythm to take the tune to its gloriously noisy conclusion.
"Burn Your Friends" takes the 90's groove of the first four tunes but add a little Truckfighters gritty dirt to the mix as well as a little psychedelic colouring and texture. Special mention should go here to the incredible drum and bass duo of  Collé and Fey who are unbelievably solid and tight throughout this tune and in fact through the whole album.
"Desert Colossus" is up next its infectious groove combined with catchy vocal lines and hooks serving as a reminder of when all a band needed for a gig was a few instruments, a generator and a vast sandy wilderness to play in!
"The End Is Nigh" closes proceedings with a peach of a track. Big and expansive and boasting a vocal that is more Ozzy than even Ozzy is nowadays, this song would not have sounded out of place on Black Sabbath's last album "13" if it was not for the fact that where Sabbath would of ramped up the atmosphere in the last quarter Desert Colossus go instead for a full on desert/stoner wigout!

As debut albums go this is not perfect but then again this is stoner rock and as fans we don't look for perfection, we like a bit of dirt, quirks and roughness in our grooves so with that said then I suppose this IS actually perfect!!! Go figure........

Posted by Desert Psychlist at 12:07