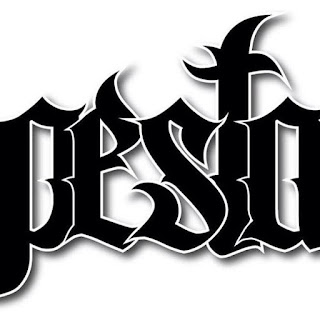 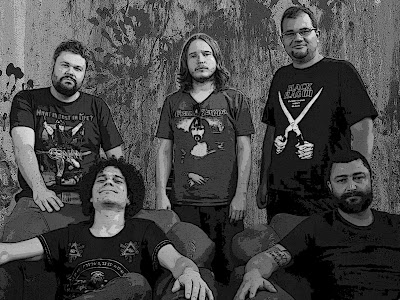 Seems that lately, where the underground/alternative rock scene is concerned, that all roads lead to South America, and Brazil in particular!
Pesta are from Belo Horizonte, Brazil, a city surrounded by mountains, so I suppose its no surprise that the sound they make is in turn quite mountainous. The band consist of Anderson Vaca (bass), Thiago Cruz (Vocal), Daniel Rocha (guitar), Marcos Resende (guitar) and Flávio Freitas (drums) and were formed in 2014 with the intention of making music that paid tribute to their doom heroes, Pentagram and Black Sabbath but also had a flavour of the desert/stoner vibes of Kyuss and Sleep.
Does this mix of styles works? Well you can judge for yourselves by giving their new album "Bring Out Your Dead" a listen... 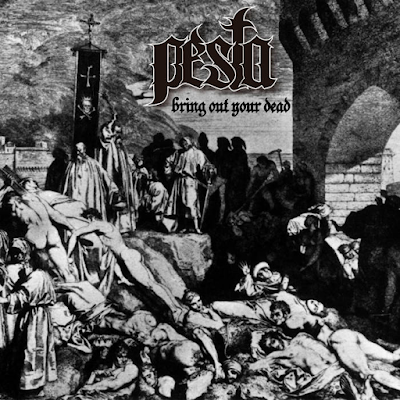 "Black Death" opens the album and presses all the correct buttons with a slow downtuned funereal riff accompanied by thick sludgey bass lines and pounding drums that then morphs into an uptempo and slightly Iron Maiden-ish galloping groove over which Cruz then adds vocals. Given the songs dark metallic doom vibe the listener could be fooled into expecting black /death metal type demonic growling or at the least a stoner rasp brought on by necking copious amounts of Jack Daniels and smoking too many exotic cigarettes, this is not the case. What you get instead is a surprisingly clean, straight tone that although lacking the pyrotechnics of a Dio or a Dickinson has a latent power that is quite refreshing and totally effective.
"Words Of A Madman" is up next and slams straight into gear with the band jamming on a dark Sabbath-esque doom groove. Rocha, Vaca and Feitas lock in tight creating a wall of riff'n'roll complete with subtle shifts of time and dynamics into which Resende then inserts Iommi-like solos and licks as well as chordal accompaniment. Cruz lays a perfect vocal over the top, soaring in the verses then dropping  low for the chorus where he is joined by Vaca on backing vocals in a wonderful display of dark harmony.
"The Butler Did It" is a superb but short bass solo from Vaca that I'm certain is a nod to Geezer Butler's bass intro (Bassically)) and like that intro heralded the mighty N.I.B. this one does the same job for the next track.....
"Intimate" swings like pendulum in an earthquake, its palm muted chugging groove surrounding Cruz's superb swaying vocal in a dark envelope of delicious riffage. Freitas and Vacas lay down a solid foundation of rhythmic thunder over which Rocha and Resende lay their riffs and solo's. As the song fades into silence you have just enough time to catch your breath before your slammed to the ground again with....
"March of Death". Here we get a glimpse of those desert grooves hinted at in my opening piece, although a far cry from the sandy grooves of Kyuss the song does lean towards a more stoner/desert rock vibe than the doomier Sabbath/Pentagram dynamics of the previous tracks. Cruz shifts his vocals into a slightly higher register over a repeating and catchy riff that  that hooks you at the start and will not let go until the final note.
"The End Is Near" takes the desert vibe a little further with a delightful little bass dominant groove that at 00:54 seconds is just a tease of what this band may be capable of expanding on in the future.
"The Fourth Horseman" grooves around a gloriously infectious circular riff over which the vocals take on a slightly epic doom meter and are punctuated by occasional spoken dialogue. As the riff builds Cruz briefly lifts his vocal into falsetto and, for the first time on the album, he struggles, managing to pull off the vocal operatic but only just.
"Possession" closes the album with a slice of classic, atmospheric doom that mixes spoken passages with deep dark ambience and thick sludgey riffage. Slow, pondering with elements of space and psych at its core it builds layer by sinister layer evoking a feel of creeping evil with its lyrics such as "Invisible claws,  Marks the body, Bathed in blood,  Deep wounds, That shred to the soul" further ehancing that point.

"Bring Out Your Dead" is a GOOD solid album and shows that Pesta are a band to keep our eyes and ears on, a band who are full of promise and who are unafraid to step outside the box now and then. It is not a GREAT album but then very few debut's are but if Pesta continue to make music in this vein, that is this good and has the same sense of adventure shown on these eight tracks then that GREAT album is just around the corner!