With so many genres and sub-genres dwelling within this thing we call the "underground rock scene" and combined with our insatiable need to compartmentalise and tag everything we listen to, it can be quite confusing for a new band to find their place in things, Are we a sludge band, are we a stoner band, do we play psych or blues, is it metal and if it is metal are we stoner doom, prog, black or death? It's enough to make you want to split up before you've even bought the instruments!
It must be even harder if your in a band called Forming The Void and you incorporate elements of all these things in your music! 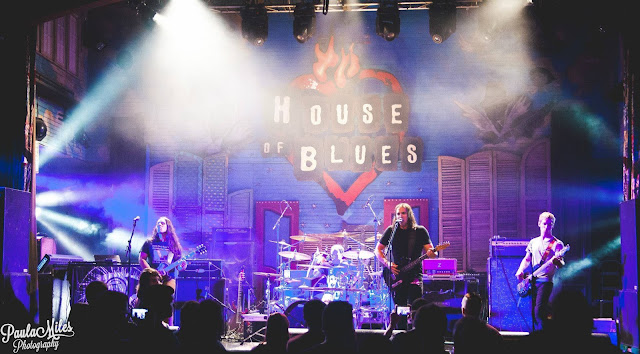 Forming The Void are from Lafayette, Louisiana and are a quartet comprising of  James Marshall (guitar/vocals), Shadi Khansa (guitar), Luke Baker (bass) and Jelly Boyd (drums). In 2014 the band released an excellent self-titled three song EP that kind of slipped under the radar of the underground media but undeterred the band have come back stronger and bolder with their new album "Skyward" 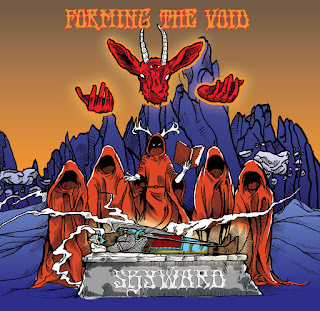 "Skyward" opens proceedings with a bang it's eastern themed groove coming across like a "Kashmir" for the 00's, it's gentle slow building raga intro suddenly exploding into a molten dripping volcano of sludge thick riffage and powerful roared vocals. Marshall, his voice strong and powerful and not dissimilar to Spelljammer's Niklas Olsson, roars lyrics full of sci-fi imagery over a backdrop of shifting dynamics as the band effortlessly swing between eastern psych ambience and western stoner/prog metal in a stunning display of skilled musicianship! It is a superb opener and bodes well for what the rest of the collection has to offer.
"Three Eye Gazelle" kicks off with fingers sliding up through the notes on the fretboard and then straight into the songs main riff. Marshall and Khansa then fall into a loose Alice In Chains type groove, their  guitar tones blending together in a deliciously sludgey take on the Jerry Cantrell slur.
The songs loose verse/ chorus/verse structure is further enhanced by some incredible bass work from Baker. his deep rumbling bass lines combining with Boyd's  mix of intricate and powerful drumming in a wonderful display of rhythmic dexterity.We also get our first glimpse of Marshall's mellower vocal style on this song, when he sings the lines "Eyes fall rejoice the darkest day is done.
Arrive the stone we'll sway into the dream as one" he delivers them with a clean grunge -type weariness that has an ever so slight Cobain/Staley vibe and tone to them and works as a nice respite from his full on stoner roar. The song reaches a glorious climax with guitars wailing intto the fade against a wall of dark rhythms.
"Saber" sees Marshall expand on the cleaner grunge -like tones of the previous song this time against a backdrop prog-ish metal that again re- kindles the eastern themes of the the title track. Khansa channels his inner John Petrucci by laying down some truly astonishing solo's throughout the songs 6:18, exploring a few exotic scales as well as inventing a few new ones along the way. Marshall holds his end up with thick fuzz drenched distorted riffs, locking in with the rhythm section to create a wall of glorious distorted and beautiful noise.
"Return Again", like the last track, travels down the progressive high road but this time adds a little psych atmospherics to the mix, dropping in a few gentle arpeggios inbetween the full on stoner/sludge riffery giving the song an almost Baroness feel on occasions.
"Sleepwalker" closes the album with a track that totally epitomises what this band are all about, prog, metal, psych, grunge and stoner all pushed into one pot and blended into some kind of alternative musical smoothie. Baker and Boyd shift the rhythms around the guitars of Marshall and Khansa with the former delivering his cleanest vocal of the album and the latter shading the groove with touches of pastel colouring and vivid texturing. A little less intense than the rest of the album it nonetheless merits it's place in this collection if not for its bombast then for its beauty!

Forming The Void have managed in "Skyward" to put together an album that is as diverse as it is direct and that encapsulates everything that is good about this scene we now call the "underground" and that alone is reason enough to check them out....

Posted by Desert Psychlist at 15:38