Some bands like to shroud themselves in a cloak of mystery, a little snippet of information here a little there but nothing concrete that us bloggers and journalists can hang our hats on, Sun Preachers  are one such band, a band who let their music do the talking for them. And what a glorious music it is....! 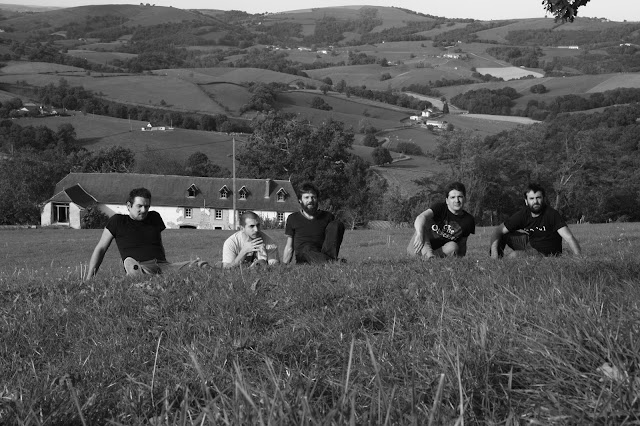 Sun Preachers are from Bordeaux, France and have been plying their trade around Europe for a while now releasing on their way a couple of EP's Beauty Of Perversion (2009) and 2012's Faces of Ashes (both of which are available as free downloads on their Bandcamp page) These two releases showed Sun Preachers as a band not just content to stay confined within the four to the floor restraints of the stoner/hard rock scene, they showed a band who wanted/needed to stretch out, progress, flex their musical wings and fly. In December last year (2015) the band released "Walking Towards The Tower", six tracks of incendiary hard rock saturated with psychedelic colouring and progressive complexity. 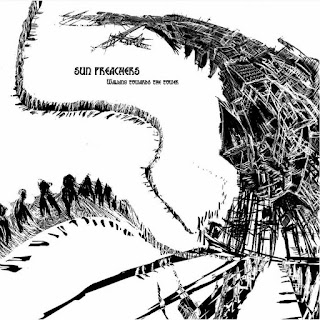 "Walking Towards The Tower" takes the classic/hard rock of the 70's mixes it with a little late eighties/early 90's desert/stoner and sprinkles over them elements of both prog,psych and even a little jazz. "This is not something new" I hear you say, "there are hundreds of bands who do the same" This is true but it's the way these elements are fused around each other that make the Sun Preachers sound so uniquely their own. The dynamics of light and shade are used to great effect throughout the albums six songs, heavy rock riffs sit side by side with moments of ambient beauty carrying the listener on a roller coaster ride of emotions and moods. Guitars howl and scream in frenzied anguish one minute then drop down to gentle whispers the next while keyboards fill the spaces in between with swathes of deep atmospheric colour. The rhythm section of bass and drums shift between these dynamics with seamless intricacy sometimes following, sometimes leading from the front, solid and tight when needed. flexible and fluid when the song calls for it. Over this are laid the vocals, strong and powerful in the albums rockier moments yet tender and world weary in its gentler more tranquil sections,  conveying a warmth and tone that is a rare thing to hear in these days of growlers and shouters. None of this would be of any use though if the song writing was not of a good quality and that is the strength of this album, the arrangements, pacing, lyricism and structure are all of the highest order and this combined with the high levels of musicianship and the sterling production make this an album any rock fan would be proud to own!

Posted by Desert Psychlist at 18:44