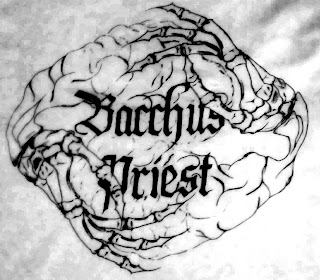 Hailing from Athens, Greece Bacchus Priest began their career by honing their skills covering tunes by,among others, stoner/doom icons Pentagram, St. Vitus, Sabbath and Kyuss. The band soon graduated  to penning their own songs, taking inspiration from the bands they covered but then adding to the mix elements of  hazy psych and gritty blues which they then wrapped in a cloak of doomy occult grooviness.
The line up of Mike -guitars, Nefeli - drums, Costas - bass and Katerina - vocals having written and arranged a number of songs that they truly believed in decided it was time to record these tunes and so convened at Wudsound Studios in July last year (2015) to record this their self titled debut...... 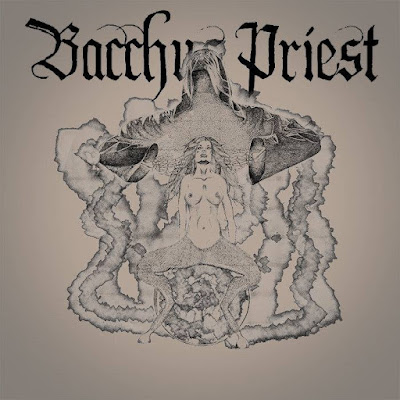 "Red Skies" opens the album with a delicious Colour Haze type circular bass line from Costas that is beautifully backed up by Nefeli on drums, the two locking together in an absolutely splendiferous display of psychedelic groove. Katerina then enters with vocals, her voice a sort of delicious hybrid of UK's Pauline Murray (punk/hard rock pioneers Penetation) and USA's goddess of alt.rock and poetry Patti Smith., her distinctive powerful tones adding a certain  alternative doom gravitas to the music and the lyrics. Over this Mike's guitar lays down swathes of swirling psych colouring, hard fuzz riffage and wah drenched soloing, painting sonic portraits with his six -stringed brush. The song although pulling all the bands influences together in one place never allows those those influences to overpower or detract from the bands own unique sound and vision for their music.
"Clockwork Thoughts" sees the band hit a more strident groove with Mike's guitar stepping out from the colouring and texturing of the first track and taking a more dominant hard riffing role. Katerina also adds a little grittiness to her vocals, a slight smokey rasp in the lower register and hint of throaty vibrato in the upper. At the 2:00 mark things take a dramatic turn with the band entering into a doomy atmospheric groove before ramping it up into a full blown psych blow out with Mike's guitar leading the way, shredding mind blowing solo's beneath which the bassist and drummer keep it all loose and tight in equal measure.
"41° Shot/Out Of The Void" is a song in two parts with the first half being a solo guitar showcase that sees Mike exploring his jazz/classical chops with gently picked arpeggios and jazzy chords being the order of the day  The second half  is a doom/occult groove monster.that shifts dynamics like a racing driver shifts gears, a stoner riff fest one minute the next all deep bass and echoed vocals only to shift again into slow psych doom/occult territory.
"The Awakening" starts off with a frenzy of feedback, dial twisting effects and white noise before settling into a warm mid tempo stoner groove to which Katelina adds her deliciously distinct vocal tones. Mike enhances the whole thing further by adding a delicious frenetic bluesy guitar solo to the proceedings, a solo that is full of natural feel as well as amazing technical prowess.
"Through The Mist" starts off dark and doomy and almost funereal before exploding into a Black Sabbath type groove with Mike employing little Iommi-isms throughout, his vibrato at the end of the riffs, his minor pentatonic solo's all scream the iconic  Sabbath guitarists name. Underneath this Nefeli and Costas lay a solid wall of rhythm that Ward and Butler would be proud of. Katelina though is no  Ozzy clone and what she brings to the table with her unique tones takes the song out of the realms of mere Sabbath worship and places it into completely different sonic universe.
"Sacred Voodoo" closes the album with 10:02 minutes of searing doom laden psych that begins with the band hitting on an up-tempo stoner doom groove with Mike's guitar laying down a swirling drone like guitar motif, punctuated by a catchy lick, that is pushed hard by Costa and Nefeli's insistent rhythm work. Katalina sneers and  snarls the songs lyrics with wicked malevolence before the whole mood changes at the 2:50 mark. Here the vibe drops down into a pure  traditional/epic doom groove with the vocals following suite. Katalina 's voice drops low, preachy and sinister as if passing judgement on all who stand before her, Mike lays down absolutely stunning dark moody solo's between the verses. his guitar wailing high and free over the solid wall of doom beneath. The song winds down slowly unil it fades away into silence, a silence that allows the listener to catch his/her breath before hitting the repeat button and starting the whole experience again!
If you like your doom/occult grooves with a deeply dark edge, enhanced with a little psychedelic texture and colouring then check out Bacchus Priest, you'll be glad you did! 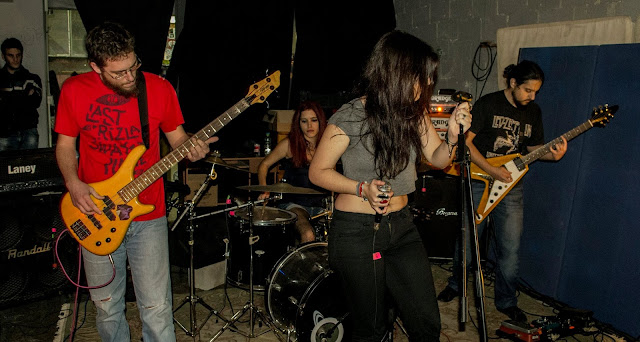 Posted by Desert Psychlist at 13:37