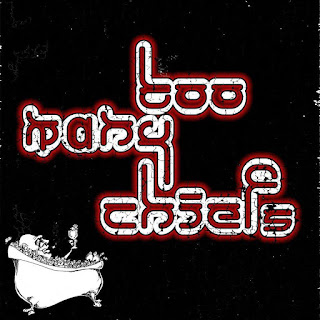 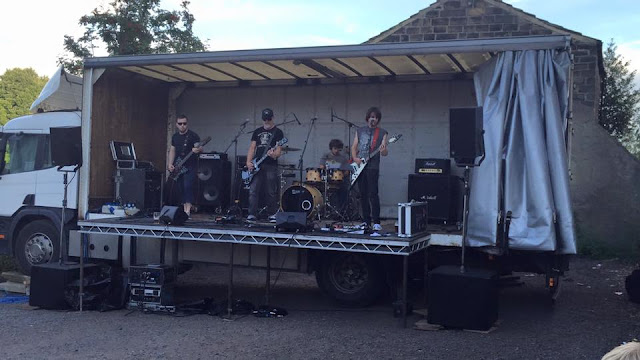 Bradford, UK is not a place you would expect to be mentioned in the same sentence as the words stoner and psych, the West Yorkshire city is better known for it's wool than it is it's music scene but that may just change if Too Many Chiefs have their way.
The quartet of Phil Hey - Guitar/lead vox, Dave Wainfor - Guitar/vox, Martyn Birchall - Bass and Warren Garner - Drums have just released their self titled album on Bandcamp, a mix of gnarly fuzz and psych that recalls the shoegaze/stoner vibe of Canada's Quest For Fire yet retains a little of West Yorkshire grit within its hazy distorted grooves. 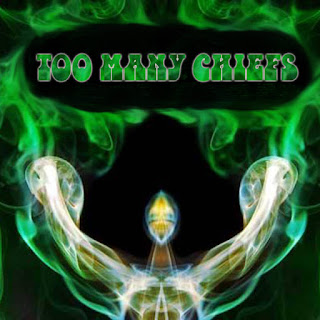 "Glide" starts the albums ball rolling with a fuzz and wah drenched little number that tells you everything you need to know about this band. Heavy, but never brutal, riffs compete with slightly shoegaze/indie vocals that float  majestically over and around a solid  and insistent rhythm base. The guitars of Hey and Wainfor compliment each other perfectly with  one laying down the fuzz and the other injecting little gems of licks and solos in the spaces in-between.
"Psylocybin" continues in much the same vein with its circular riff enhanced with flourishes of psychedelic colour and texture and driven by the incessant and pulsating rhythm work of Birchill and Garner. Hey's vocal, unfancy and bereft of any type of vocal pyrotechnics nonetheless fits the bands groove like a hand in a velvet glove, his tone melodic and clean sits perfectly within the mix, not too upfront or too far back but just where it is most effective!
"Devil Bird" is up next, infectious and addictive with a chorus you just can't help joining in on. Hey's and Wainfor's voices, like their guitar playing, blend perfectly together. Heavier than the two previous tracks the song also boasts some superb effect soaked guitar solos.
"Road Trip" sees the band shift into a slightly different groove. A stuttering, stop start riff leads the way and sees the vocals take on a slightly rap metre giving the tune an almost Nebula/early Fu Manchu feel  that is very old school desert/stoner and very enjoyable.
"Wounded Yak" is an excellent instrumental jam with the band all stepping up to the mark. Hay's and Wainfor's guitars lay down a plethora of tasty psychedelic licks and fuzzy riffs under which  Birchill and Garner lay a solid wall of rhythmic splendour.
"Burning Cave" gets the band back in the psych/stoner saddle with a deliciously groovy circular riff that spins around what is probably the albums best vocal.  The song shifts into a slower desert groove in the last quarter that i'd love to have heard the band expand on.
"Blind Man" closes the album with an all out rocker and sees the vocals take on a punkier, shoutier tone. The band throw off their cloak of psychedelic colours and go for a more abrasive, aggressive groove that although having its merits does not have the subtleties and nuances that were so prevalent on the rest of the album. It is for me the albums weakest track and I would have much preferred they had extended the final slow burning groove of "Burning Cave" and finished on an epic high, but that's only my opinion and i'm sure many will disagree.

Check these guys out here...

Posted by Desert Psychlist at 17:15