Quite awhile ago Soshanna Scarsella (a.k.a.Love Among Ruins), Outlaws of the Sun blog contributor, Bandcamp reviewer and friend recommended I give a listen to a band she had come across who went by the name of Wolves of Winter. The band consisting of Josh McGee (guitar and vocals), David Weaver (bass) and Mike Horn (drums)  and hailing from Phoenix, Arizona had just released, via Bandcamp, a very ambitious full length demo..... and it was a killer! 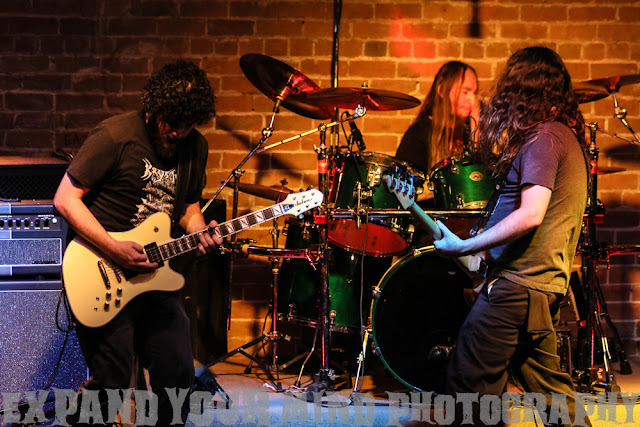 It's been almost two years since that demo but the band have not been idly sitting on their thumbs contemplating the universe, they have been busy learning their craft, honing their skills waiting until they felt ready to give those early demos the home they deserved. 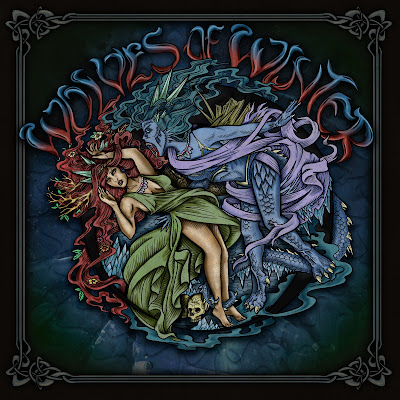 Wolves of Winter (the album) is basically the 2013 demo re-shuffled, rearranged and re-imagined, the rawness of those early tunes buffed and polished until they gleam like  diamonds in the sunlight.
"Astrothoughts" which was the demo's closing track this time leads from the front and it deserves it's place. McGee's lone guitar reverberates from the speakers with a sliding and slurring intro reminding me a little of Joe Walsh's iconic opening salvo to "Rocky Mountain Way". Weaver and Horn then join the fray the two  locking into a tight mid-paced, earth moving, heavy groove over which McGee lays a stunning short bluesy solo that leads into the first verse. McGee's vocals, clean, warm and melodic, sit perfectly against the heavy riff'n'roll all around them and give the song an almost 60's psych/hard rock feel reminiscent of Randy California's Spirit.
"A New Reality" rears it's head next and once again i'm getting that Spirit vibe. A little faster paced than the previous tune the song rides along on a wave of exemplary rhythm work from Weaver and Horn with McGee's chugging guitar riffs and solo's the icing on the cake. The song has a totally infectious verse/chorus/verse that I defy even the most hard headed stoner not to fall in love with.
"Tooth and Nail" hits the ground running with the band hitting a groove that is a little more stoner than West Coast psych. Horn attacks his drums with a little more ferocity here, driving the groove with powerful percussive dexterity and is ably assisted by Weaver his bass deep and rumbling reverberating through and around the music, it's almost as if the pair are attempting to move, with the power of rhythm, the mountain McGee refers to in the songs chorus.
"Start of the Season" sees a little darkness creep into the bands sonic palette with the groove shifting into slightly sludgey, doom- lite territory with McGee's vocals switching back and forth between clean/melodic and hardcore scream giving the songs vibe a real sinister edginess. I have to say here I've never been a fan of extreme vocal styles but the balance here works well for me.
"The Blind Leading The Blind"  an instrumental, opens with a gentle guitar arpeggio backed by shimmering cymbals and seductive bass lines before exploding into an absolute monster doomy psych groove. The tune swoops and dives between the two dynamics building to a heavy brutal crescendo one minute only to fall back to a whisper the next creating a delightful feeling of light and shade throughout.
"Devil's Kiss" hits the stoner trail again with the band locking in tight to create a massive wall of sludge/stoner noise. McGee's vocals are laid a little further back in the mix here and this adds to the songs dark intensity, an intensity that goes into overdrive with it's primal screamed finale.
"Rubber Band" stays in the same ball park as the previous track with Weaver and Horn laying down massive slabs of rhythmic thunder over which McGee lays clean slightly phased vocals. The track sees McGee fully pull on his guitar hero outfit with a burst of incendiary guitar that finds a perfect balance of shred and feel, it's probably only a couple of seconds long but utterly makes the track for me.
"Child's Reasoning" takes the darkness that is at the heart of this album and marries it to the West Coast psych vibe of the first two tracks resulting in a glorious hybrid of the two. McGee's vocal swings with an almost Alice In Chains melodic metre that is strangely charming against the heavy sonic barrage that surrounds it.
"Manipulation" steams along on a chugging prog metal groove curtesy of Weaver and Horn with McGee adding little licks and squeals as well as some scintillating solo's to the mix. Infectious and with a ton of little hooks and catches its only fault is it's too short!
"Try Till Dead" closes the album on a high, McGee's vocals and stuttering guitar riff combining with the awesome rhythms of Weaver and Horn to create an incredible finale to what is an absolutely incredible album!

I have been raking my brains trying to come up with a way to close this preview/review but keep coming up short so i'll leave it to the man behind the six strings and vocals, the man who produced this stunning album, Mr Josh McGee

"My goal was to produce a musical product. Not a squashed piece. Dynamic range up to 25dB. As it was meant to be.No autotune or click tracks, i wanted to produce the best album I could. It is honest and real."

Posted by Desert Psychlist at 07:57