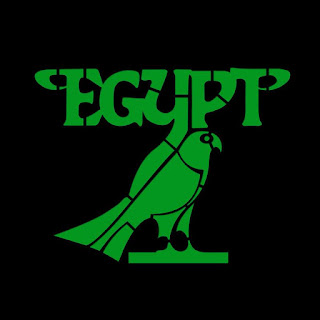 You've just spent endless hours refining your end of year best of 2015 list, trying to decide between Elder's "Lore" and Spelljammer's "Ancient of Days" for that coveted 7th place position, decision made you click on publish and sit back for a moment to admire your hard work. It is in this moment, this nano-second of time, after you have posted your list over every available social media site, that a legendary stoner rock band from Fargo, North Dakota decide to release their new killer album. Bastards!!!

The band in question are stoner rock icons Egypt a band whose first self-titled EP has achieved, within the underground rock scene, cult status and who have just released their latest album "Endless Flight" 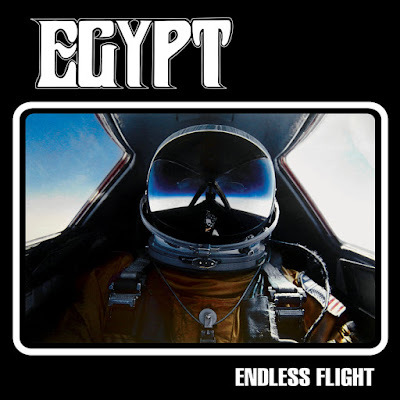 The album opens with title track "Endless Flight" Neil Stein's delta blues drenched guitar intro recalling a time long ago when the blues was played by black men in dusty black suits playing for mainly black audiences. Chad Heille's drums and Aaron Esterby's bass then join in, moving the whole groove into more of a traditional blues shuffle then BANG the whole track explodes into a glorious cacophony of noisy stonerized blues rock. Esterby's raw edged, larynx ripping vocal roaring above a backdrop of thunderous drumming and bluesy guitar. The song shifts direction once again mid song and sees the band enter into slightly more doomy territory yet managing to remain within the blues framework of the songs origin. It is a superb opener and a great indicator of what to expect from the rest of the album.
"The Tomb" opens with Esterby's bass laying down an almost funky bass line over Heille's assorted percussion before moving up a gear into a full on bass heavy riff. Stein comps along through the verses unnoticed until just over the three minute mark when he unleashes an absolutely blistering solo that is rich of tone and full of feel. Vocally Esterby is at his most visceral, pushing his voice harder than I think I've ever heard before, shredding his vocal chords in a display of raw emotional passion.
"Tres Madres" comes straight outta the blocks with the band grooving on a delicious Zeppelin-esque riff over which Esterby lays a slightly less throat ripping, but still totally effective vocal. At around the 3:30 mark the song goes in to an absolutely wonderful psych jam with Stein laying scintillating solo over scintillating solo, ripping unbelievable flurries of  notes from his six strings, utilising every inch of his sweat stained fretboard. Beneath this Heille hits everything he possibly can in a dazzling display of Bonham-esque power and dexterity while Esterby keeps things grounded with his rumbling liquid bass lines, awesome!
"Black Words" sees the Egypt finding the Black Sabbath mojo that has always run through this bands veins. The songs brooding heavy riff swirls around the listener like a dark mist with Esterby's stoner roar adding a sinister evilness to the songs mood. The tune screams out for abrupt Sabbathian  time changes and guitar solos and Egypt duly and stunningly deliver both.
The album closer "Shaman's March" is a full on doom monster with a dark slow droning riff punctuated by Esterby's throaty growled vocals and Stein's slow burning guitar solo and enhanced by Heille's solid drumming. It's an atmospheric and deliciously eerie finale to an absolutely wonderful album from a band who are still well and truly on top of their game. 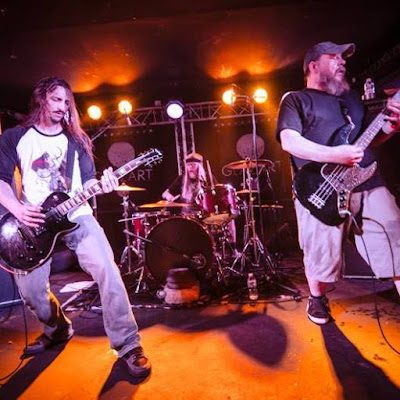 Posted by Desert Psychlist at 15:12