Classic rock and heavy metal are two genres that have grown up side by side but unlike sub-genres hard rock and stoner, who have roots in both, the two very rarely get in bed with each other. Off the top of my head I can only think of three bands who have managed to seamlessly weld these two giants together and they are Sweden's Spiritual Beggars and Grand Magus and to a lesser extent USA's Stone Axe. These three manage to harness the strong song writing/arrangements and melodies of classic rock and marry them to the heavy rhythms and riffs of heavy metal without compromising the sonic impact of either.
Today, thanks to Youtube legend MrStonebeliever, I found another band who fit the criteria mentioned above.....Smoke Healer! 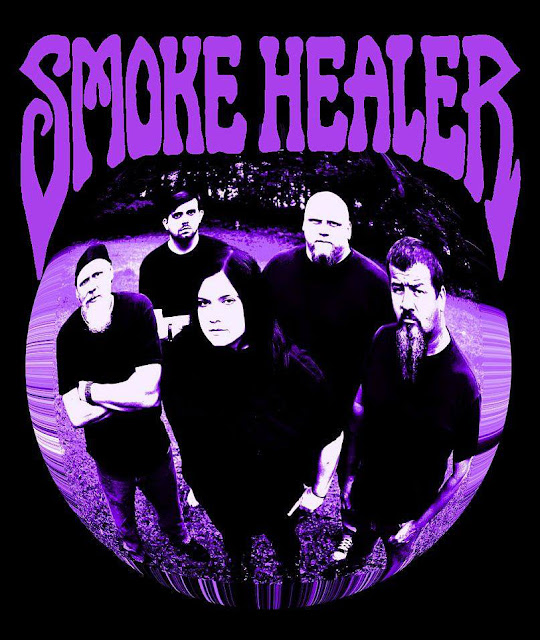 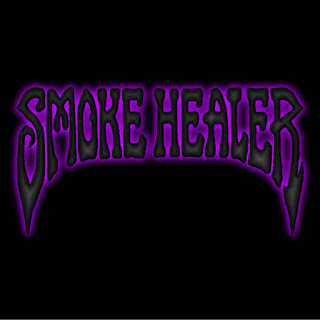 The album starts with a short organ based intro "Requiem Fugue" before exploding into the first track proper "Black Liquid Drain" a storming riff monster embellished with Zack Wylde type guitar squeals and pinched harmonics and fronted by superb vocals.
"Figure It Out" follows with a Sabbath-like opening riff over which vocalist Dan Ryan lays another fine vocal, his voice may not have the power of a Coverdale or Dio but he more than makes up for this with impeccable tone and delivery, gritty and throaty in the upper register and smooth and dark in the lower.
"Garden Of Sin" is next up beginning with effect laden guitar buoyed by eerie keyboards before segueing into an atmospheric doom riff. I have not figured out whether lead guitar duties are shared by Chris Brown and Jake Stone or that one is the riffmeister and the other the soloist but whatever way it works there is some superfine six string work going on here. Solo's are concise and note perfect soaring and squealing in and around the rhythms and the riffs are thick distorted and cut through the mix like a chainsaw cutting through balsa wood.
A didgeridoo heralds the start of  "Desert Son" before settling into a slightly eastern/Arabic groove with Brooke Smith and Mike Hamm holding down the bottom end with a solid  and dazzling display of bass and drum. Ryan sings of "Burning you alive from within" and of "Being the one, the desert son" with conviction and passion, a passion that is matched by the two guitarists who deliver a stunning array of riffs and solos to the sonic canvas. Listen out for some killer violin from, guest and band friend, David McElfresh from Moonbow who trades licks with Stone and Brown to marvellous effect.
"Return" is a stunning mid-tempo song that is part power ballad, part metal torch song and once again the band is joined by McElfresh, his violin solo full to brimming with emotion and feel and combined with the scintillating guitar solos takes this song to a whole new level. Ryan gives the performance of his life here filling every vocal line with a feeling of weary melancholy, roaring the words as if he's living them, awesome!
"Edge Of  The Flames" opens with Hamm hammering out (see what I did there) a tribal beat on his already well punished drum skins against a buzzing distorted riff, The song then settles into the songs main refrain with Ryan singing of " Strolling at the edge of the flames" while around him guitars squeal and squawk. There is a moment during the cacophony when everything falls away and Smith delivers a short but absolutely delicious bass lick to the proceedings, it's one of those magical moments in a song when you think that's just soooo perfect and right!
A droning, circular motif opens "Nowhere To Run" before exploding into a chugging palm muted riff that takes the song out of the classic rock/metal hybrid of the rest of the album and places into a more straight ahead stoner metal arena. Ryan follows suite with his vocal taking on a more whiskey soaked stoner rasp than on previous tracks, A shredded guitar solo adds to the full on metal dynamic of the song, it's short at 3:35 but packs quite a punch.
Next track "Adimus Prelude" is a little strange and seems odd given the heavy riffage and powerful rhythms surrounding it but at only 35 seconds long doesn't hurt too much.
"We Are Diamonds" marries the classic rock and metal with a little prog-ish dexterity and sees the band firing on all cylinders in flurry of riffs, ambience and atmosphere.  Ryan croons, roars and bellows his way around the songs verses with a mix of vocal dynamics and tones while beneath him the band display a dazzling display of musical chops that take the music on a journey through a myriad of shifting soundscapes, breathtaking!
If you dig the three bands mentioned in the opening paragraph of this piece then check out Smoke Healer you will love 'em!

Posted by Desert Psychlist at 12:41