"Pastoral" is a word that can either mean "land used for the the grazing of sheep and cattle", "spiritual advice from clergy" or "the portrayal of an idealized life in the country via literature or music", so given that London, UK proto-metal power trio Parish describe their music as having "pastoral" themes and (as far as we can make out) seem to have no connections with either farming or religion we can only assume that it is the latter that has the greater influence on the songs that inhabit their debut self titled album "Parish" (Crypt Of The Wizard). 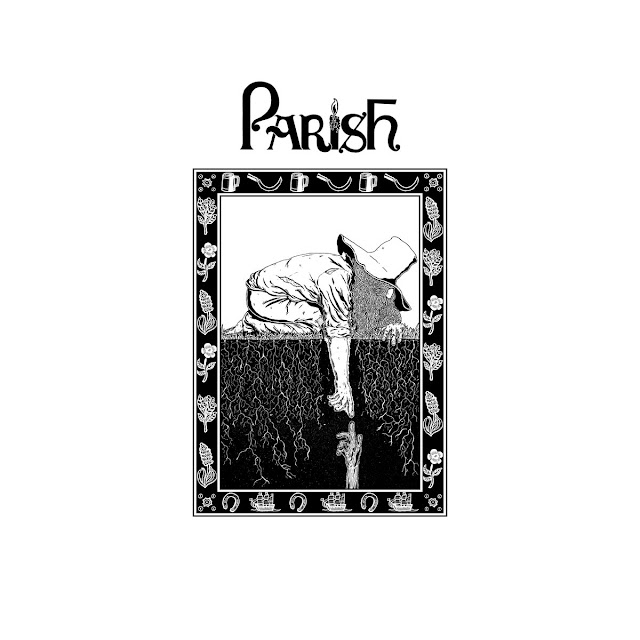 Ironically enough, for an album called "Parish" by a band called Parish, it is a song called "Parish" that kicks things off, a song that perfectly encapsulates the albums, and for that matter the bands, "pastoral" approach to their music. "Parish" is a song that possesses all the riffs and rhythms you could possibly ask for in a rock song but never goes overboard on its heaviness or gets needlessly over raucous in its musical attack, this is not to say heaviness and raucousness are elements that this song lacks it just they are somewhat tempered by the bands more considered and somewhat light-handed approach to their art, something that is also reflected in the songs vocals which are sang with clean clarity and possess just the merest hint of mellow huskiness. The relaxed, "pastoral" approach of the first track is something that runs right through the albums ten tracks, songs like "Lucinda", "Soil and Scythe", "Pilgrim's End", and "Poseidon Song" all contain their fair share of crunching riffs, growling bottom end and punchy rhythmic patterns but the band utilize these elements in support of their song writing rather than in an attempt to hide any lacking in that department. The band also cleverly keep their songs short sharp and to the point, you will find no meandering ten minute jamming on this album, each song, apart from Sabbath-esque "Gaolbreak" is kept under the five minute mark and each benefits greatly from this approach with each song feeling that bit more immediate, focused and impactful. The real "pastoral" element of "Parish" (the album) can be found in its lyrical content the band filling their songs with references to demons, witches curses and Puritan fire set in rural landscapes of an age long past. Quite what led three London based rock musicians to explore such rural themes is unknown to Desert Psychlist but given how well they integrate those themes into the retro flavoured proto-metal grooves that are the backbone of "Parish" we are pleased they did,  this is one seriously good album! 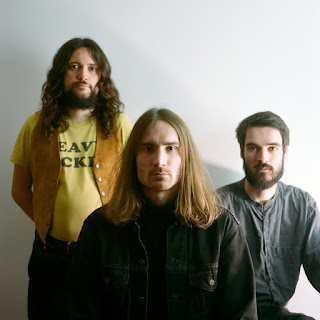 Parish, Joe Bulmer (drums); James Paulley (guitar/vocals) and Tom Hughes (bass), jam a groove that harks back to a bygone age, a groove inspired by bands like Pagan Altar, Ashbury, Home and Wishbone Ash, bands whose rock and metal incorporated aspects of traditional music and folk and relied a little less on the blues than many of their late 60's to mid 70's contemporaries. It is a sound many may describe as "retro" or "vintage", and in truth it is both of those things, but would be better described as just bloody good rock music (if just a little "pastoral")
Check it out ...
© 2022 Frazer Jones
Posted by Desert Psychlist at 04:36