One of the most important elements of doom as a music is probably the one that gets overlooked the most, you may have the low down-tuned riffs, you may have the slow ponderous and pummelling percussion and you may have the dark lyrical tales but if you can't create the dank brooding atmospherics that pull everything together and are such  an essential component of the genre then you might as well forget calling what you do doom. Fortunately Fort Worth, Texas quartet Realm Drifter, Jayson (vocals/guitar); Richie (guitar); Lee (bass) and Daniel (drums), do not have this problem their songs are absolutely drenched in atmosphere, as you will no doubt find out for yourselves when you give the bands self-titled debut "Realm Drifter" a spin. 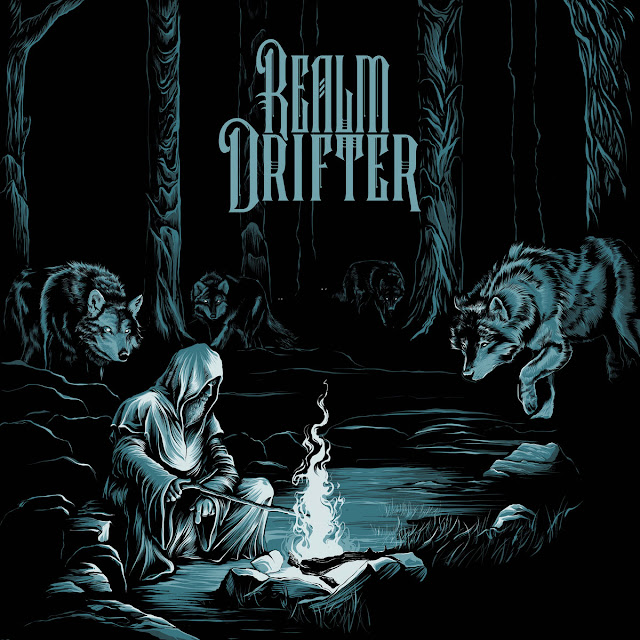 You probably could not ask for a more atmospheric opener than "Fire for Wolves" its intro of liquid deep bass and solid drumming leads into a groove that sits somewhere between slow and mid tempo and boasts scorching blues tinted guitar solos that soar with dark majestic grace over a gritty edged vocal that borders on harshness but manages to retain an air of clarity. "With No Name" follows and has a slower more doom-ic dynamic and finds Jayson tempering his vocal almost to a croon in places, something that ramps the songs impact up several notches and gives the song added depth especially when set against the mix of crunching riffs and reverberating almost surf -like guitar textures that accompany it. Lee gets to introduce next song "Feeding Shadows" with a low growling bass motif which is then joined by Jayson and Richie's guitars in a low, slow heavy groove expertly anchored by drummer Daniel's powerful rhythmic patterns around which Jayson fashions a slurred hazy vocal melody that occasionally erupts into a feral roar, the song finally closing its account with a dank dark and atmosphere drenched jam that sees the guitarists trading off swirling solos and screeching feedback against a backdrop of deliciously dark doom-ic groove. "Sound of an Owl" sees Realm Drifter stepping into psych territory with hazy filtered vocals and twanging guitar tones routinely being interrupted by sudden bursts of low slung metallic mayhem. while final track "Realm Drifter" retains both the twang, haziness and quiet/loud/quiet dynamics of its predecessor but this time when it erupts it erupts like a volcano. 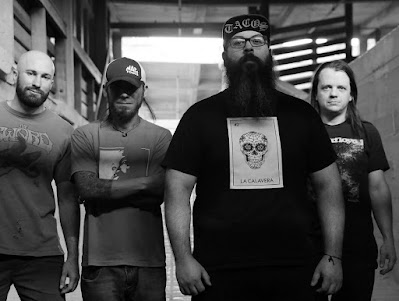 Doom is a music that trades heavily on atmosphere and there is no lack of that commodity in the five songs that make up Realm Drifter's debut, brooding moody and dark "Realm Drifter" is most definitely the real deal!
Check it out .....
© 2022 Frazer Jones
Posted by Desert Psychlist at 09:30