When reviewing Paralyzed's self-titled debut "Paralyzed" Desert Psychlist waxed lyrical over the authenticity of the bands late 60's, early 70's heavy blues attack and we also unashamedly gushed over how well the band had managed to bring that sound up to date by incorporating elements of today's stoner rock, doom and psych into their sound. Desert Psychlist also noted that in doing this Paralyzed were not only pandering to those who grew up listening to the likes of Zeppelin, Hendrix, Cream and The Doors but were also effectively introducing heavy blues to a whole new generation of listeners who were not even born when those giants walked the Earth.
The band, Michael Binder (vocals/lead guitar);Caterina Böhner (organ/rhythm guitar); Philipp Engelbrecht (bass) and Florian Thiele (drums), have returned this year (2022) with their second full length album "Heavy Road", and if you were hoping to hear more of that voodoo tinted hard rock and heavy blues "Paralyzed" brought to the table then you will not be disappointed as "Heavy Road" brings you more of the same only this time with the bands music sounding even more bombastic, bluesier and blustering than before! 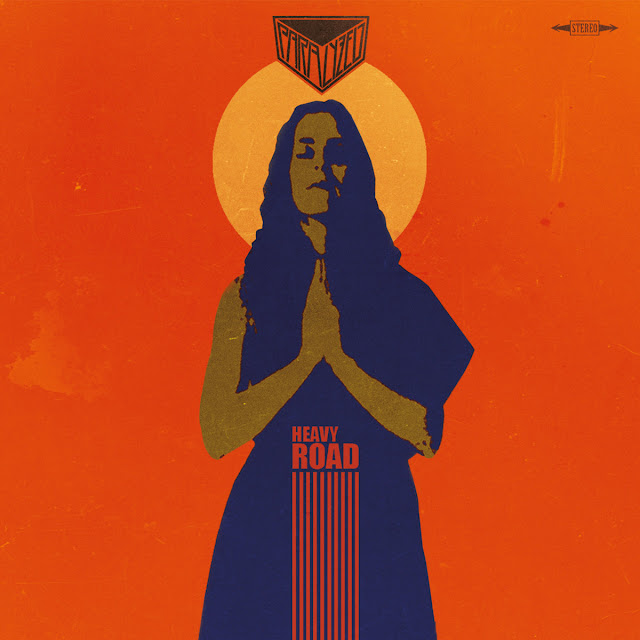 A band needs an edge to elevate itself above the wannabees and also rans that populate any musical scene and Paralyzed have quite a few edges in their armoury but by far the biggest edge Paralyzed possess has to be the voice of Michael Binder, Binder's Danzig meets Morrison meets Warren Haynes vocal tones are blessed with a gruff lived in weariness that is a perfect fit for the authentic late 60's mix of  hazy and heavy blues grooves Böhner, Engelbrecht and Thiele lay down around him, grooves that Binder himself also contributes to with his searing lead work. Binder has a voice tailor made for the blues, he can portray anger, melancholy, pain and passion without ever needing to go overboard on the vocal pyrotechnics, his voice coming across at times like a quiet storm underlined with a rumbling thunder. This is no one man show however and Engelbrecht, Thiele and Böhner more than justify their places on this outstanding album. these three are the engine room that drives Paralyzed's blues drenched grooves. Thiele's drumming, a mixture of solid tightness and loose fluidity, combines with Engelbrecht's deliciously deep and grumbling bottom end and Böhner's rhythmic riffs, crunching chords and keyboard textures, on songs like "Orange Carpet", "Pilgrim Boots", and "Coal Mine", to anchor down Paralyzed's bluesy grooves and in turn allow Binder the freedom and room to not only express himself vocally but also to unleash an absolute scorching array of solos, together these four musicians creating something that is both magical and mind-blowing.

Desert Psychlist could easily have gone into a track by track analysis of all the songs that populate "Heavy Road" but we felt that would detract a little from you, the readers/listeners, discovering for yourselves the many delights that inhabit this excellent album, all we will say is that "Heavy Road" is an album that will make any "skip" functions you may have attached to your mode of listening totally and utterly redundant.
Check it out ....
© 2022 Frazer Jones

Posted by Desert Psychlist at 05:04