"Long ago in a land far far away" is probably how Desert Psychlist should start this review of an album that tells a tale of green wizards, evil doings and cursed books but we don't want you having sleepless nights so what we will do is pack the concept behind Minneapolis, Minnesota duo Lorekeeper's new album "The Beastiary" into just a few words, so here goes,,,, green wizard finds cursed book that leads him to a library filled with similar tomes, wizard becomes somewhat of a pariah and a vessel for the books dark intent and reaps havoc on the land and is thenceforth known as the "Green Lich". Of course there is a lot more to this tale than that but we'll let John Dowling (guitar/bass/vocals) and Jacob Fulton (drums) fill in the blanks via the medium of their words and music. 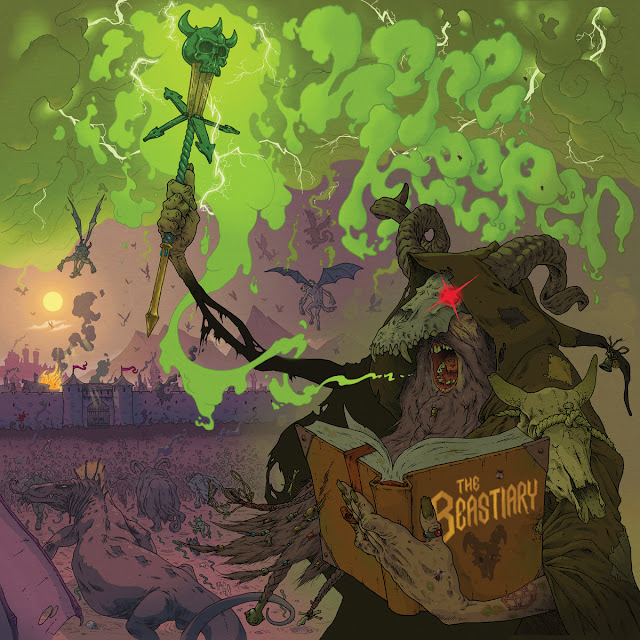 "The Beastiary" begins with "The Green Lich" a scene setting opus that explains the Green Wizard's rise to prominence against a backdrop of gnarly fuzzed out refrains and thunderous percussion narrated in clean powerful vocal tones sang with both clarity and passion. the song also adds a postscript as it winds its way to its finale with the singer telling us of a hero who intends to "track down the Lich with the magic he knows, and avenge the bloodshed the beast left in its wake" a line that nicely sets the scene for what is to follow. What follows is our heroes trials and tribulations as he journeys to confront his nemesis having to along the way overcome a swamp dwelling man eating creature ("Bog Monster"), seek the wisdom of a witch ("Oracle") and avoid a ghostly woodland spectre ("Banshee"), finally completing his quest in a battle to end all battles ("Lich's Bane"). Now with many conceptual type albums there is an element of leaving much to interpretation and a propensity for going off on cerebral tangents, things that can often leave the listener confused and a little bewildered, but this is not the case with "The Beastiary". Lorekeeper lay out "The Beastiary" like a good fantasy novel, they don't deviate, ramble or meander they tell their tale in straightforward prose as if they were reading a bedtime story to a child, each song a chapter in the story and each chapter slowly leading you towards the final reckoning you have been eagerly anticipating from the stories outset .It may be a simplistic approach but it is one that works well especially when combined with the exceptionally gnarly soundtrack of gritty stoner metal refrains and pummelling doomic rhythms this duo have chosen to decorate these lyrical tales of fantasy and wonder with. 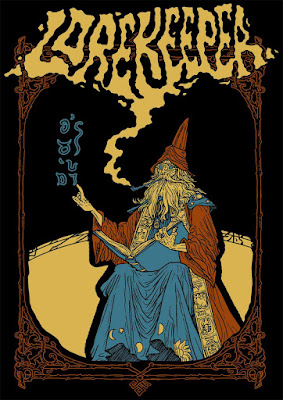 Tales of swords and sorcery combined with crunching metallic power chords and thunderous percussion has always had an honoured place in rock music, let's face it Ronnie James Dio's built a whole career on such, however no one has quite put these elements together the way Lorekeeper have done with "The Beastiary", This is an album that tells a story from beginning to end without the need to deviate and it does it so well you could at times be fooled into believing you are listening to a narrated fantasy novel on a Kindle rather than a gnarly assed rock album put together by two fantasy obsessed rock musicians
Check it out .....
© 2022 Frazer Jones
Posted by Desert Psychlist at 01:47