New York's Indus Valley Kings raised the bar pretty high for themselves with the release of their self titled debut "Indus Valley Kings", the albums mix of grungy bluesiness and fuzzy desert grooviness, overlaid with a mix of clean and harmonized vocal tones, made for an impressive musical statement especially when those elements were combined with the bands predilection for filling their songs with constant shifts in both both direction and dynamic . The trio, consisting of Billy Fridrich (lead and rhythm guitars, vocals); Jonathan Lesley Habers (bass, vocals) and Dan Lofaro (drums), return this year with a new album, "Origin", an album that possess all the attributes that made their debut such a pleasurable listen but this time with a little edgy darkness and experimentation dialled in. 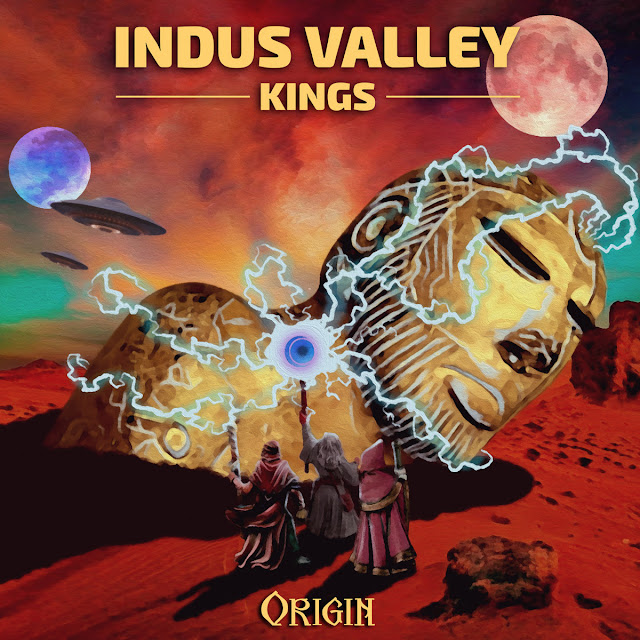 Opening track "Clown" explodes out of the blocks on a wave of thrash-like guitar riffage then just as quickly settles down into a low slung stoner groove over which clean harmonized vocals tell of "searching for the perfect" and "breaking skulls at the seams", the songs groove then shifting up a notch or two to accommodate the songs catchy chorus before shifting back into stoner mode for the verse, the song routinely revisiting these three differing dynamics over its duration only deviating to include a brief but totally face melting guitar solo. "...And The Dead Shall Rise" finds IVK waxing lyrical on the approach of an impending zombie apocalypse over a backdrop of chugging proto-doom that includes an up-tempo Sabbathian flavoured middle section replete with Iommi-esque guitar colouring while next track "A Cold Wind" mixes doom with a little grunge and jazzy psych to create a tasty cocktail of groove that will leave listeners both shaken and stirred. "Hell To Pay" sees bassist Habers taking over lead vocal duties while also bringing some four string funkiness to the table, his soulful but slightly fragile tones contrasting nicely with Fridrich's fuzzy guitar tones to give the song a very pleasing late 60's undercurrent. "Dark Side Of The Sun" follows and jams a groove nestled somewhere between doom and heavy psych but that does not quite fully commit to either and is all the better because of that. IVK opt to go instrumental for next track "Mohenjo Daro" a doom-psych tour-de-force that is in turns both heavy and languid and allows Fridrich's the space and freedom to showcase his considerable talents on six-strings. "Demon Beast" is a weird but totally compelling hybrid of indie-rock, grunge, punk rock, blues and doom that feels like it was cut and pasted together from various musical ideas the band couldn't find a home for elsewhere but then discovered worked together perfectly as a stand alone song. "Drowned" begins with strident urgency, Lofaro's furious and powerful drumming driving the song along at a tempo that sits somewhere between punkish and thrash-like while Habers and Fridrich combine to lay down complimentary bass and guitar refrains as well as melodic vocals over those rhythms. At the core of this song beats a chaotic heart, the songs mid-section being a schizophrenic mix of screaming discordant guitar solos, rumbling bass riffs and ever changing rhythmic patterns that have no real right to be existing together in the same song but nevertheless do. Elements of chaos that infected the previous song roll on into final song "Sky King" only the band keep a firmer hand on the tiller this time around and manage to just about steer their musical ship into waters a little more traditional and straightforward, the band jamming a galloping desert/stoner groove flecked with traces of doom and psych boasting an ear catching melody and scorching lead guitar work. 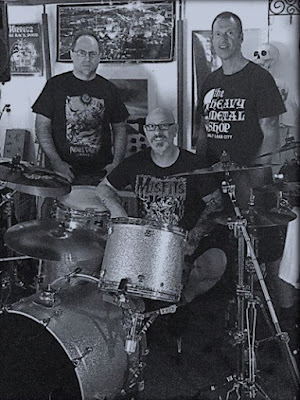 Desert Psychlist suspects that there will be some who may be turned off by IVK's diversity and off kilter approach to their music but what may turn some off them will also endear others to their cause. You cannot pin a convenient label on a band like IVK, they are a band who like to defy convention and rules, a band who will  constantly shift the focus of a song away from its starting point to take it somewhere else entirely, bringing it back only to once again go off on another unexpected tangent, maybe they should of  just called the album "ORIGINAL".
Check 'em out ....
© 2022 Frazer Jones
Posted by Desert Psychlist at 01:25