Three Frenchmen with an obsession with deserts might sound kind of weird and will sound even weirder when we mention that the desert these Frenchmen have their biggest obsession with is situated thousands of miles from their Gaelic homeland. The three Frenchmen in question are Clément Márquez (bass/vocals); Robin Caillon (drums/percussions) and Vincent Hospital (guitar) who together make up the desert/stoner combo Red Sun Atacama and the desert that is the object of their obsession lies beneath the slopes of the South American Andes and bears the last part of the bands name. Quite why the band are so intrigued by this particular part of the world Desert Psychlist doesn't know and hasn't asked them but if it inspires grooves as exiting and as ass-kicking as the ones the inhabit the bands latest album "D A R W I N" then let's hope their obsession with all things Andean never ever ends. 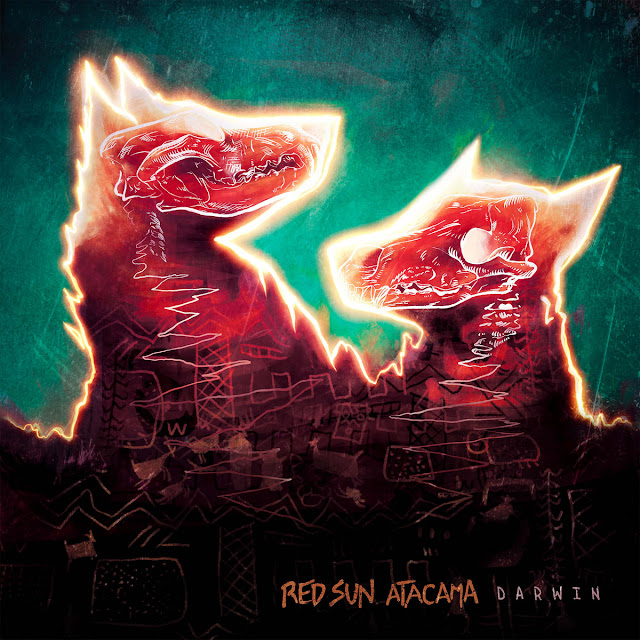 Much like they did with their previous release "Licancabar" Red Sun Atacama kick off their latest album with something in keeping with their love of all things South American, this time out its a flamenco style guitar duet, under layered with the sounds of desert winds, going by the name of "11-CH". That out of the way we get down to the real meat and potatoes (or should that be rice and beans) of what this band are all about and what they are all about is jamming desert/stoner rock of the type that used to grace the generator parties of Palm Desert, California. and there is no better example of this than next track "Furies". Never has a song been better named than this furious slice of sand blasted aggressiveness, it is a song that explodes into life with punkish ferocity a ferocity reflected both in the delivery of its vocals and the tones of its guitars however ferocity and aggression are only part of the story as the song then shifts, via a some very doom-ic style refrains, into a face melting lysergic laced heavy psych jam replete with screaming guitar solos low grumbling bass motifs and some of the best rock drumming you are likely to hear outside of a Led Zeppelin album. The mood changes for next track "Antares" to languid  and lysergic but only momentarily with Hospital's sharded guitar textures and Márquez's liquid bass runs soon making way for crunching chord progressions, scorching solos and growling bottom end set against a thunderous percussive backbeat from Caillon, Márquez decorating the ensuing onslaught with his customary high pitched wail. The band then suddenly apply the brakes and slide back into the psych drenched groove they used to kick things off with only to then explode once again and finish the song in a wave of strident raucousness. The raucousness that closed the previous track carries on into following track "Echoes" but this time has an element of old school hard rock about it, albeit blended with a little heavy psych,  Hospital throwing some tried and trusted bluesiness into his guitar parts while Caillon and Márquez lay down a strident and frankly quite manic rhythmic groove behind him. "Revvelator" is an in your face force of nature that hits hard and only stops hitting to allow Hospital the space to insert some tasty acid flavoured lead work into the mix while for final track "Ribbons" the band go all proto-doom on our asses and channel a little Sabbathian gallop into proceedings, well that is up until the half way mark when a scorching Hospital solo signals a sudden shift into  more cosmic territory that in turn makes way for acoustic guitars being strummed over the sound of waves breaking on a beach. 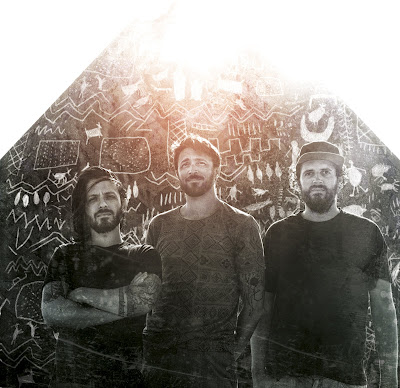 Exhilarating from start to finish with numerous twists and turns along the way to ensure maximum interest "D A R W I N" is the type of album best of year lists were invented for, with "Licancabar" the band raised the bar high, with "D A R W I N" the band have elevated that bar to an altitude that is almost Andean.
Check it out ....
© 2022 Frazer Jones
Posted by Desert Psychlist at 03:20