DUNGEON WEED ~ THE EYE OF THE ICOSAHEDRON .... review

Dungeon Weed is the brainchild of multi-instrumentalist Dmitri Mavra, a project born from the Skunk guitarists need to create during a period of forced inactivity (Covid lockdown). Dungeon Weed is very much a one man show with Mavra handling the majority of the instrumentation (guitar/bass/vocals/synths), helped along only by a couple of fellow musicians, Chris McGrew (drums); Thia Moonbrook (vocals) and Rama (synths and assorted sounds). Mavra/Dungeon Weed's first release "Mind Palace of the Mushroom God" gleaned much praise on its release for its nasty sounding grooves and its off the wall concept so expectations were high for where Mavra might take things next, if indeed he did. Thankfully the favourable reactions to his projects first release has inspired Mavra to once again don his psychedelic wizard garb and record another chapter in the Dungeon Weed story and if you liked "Mind Palace of the Mushroom God" then you are going to fucking love "The Eye of the Icosahedron"(Forbidden Place Records). 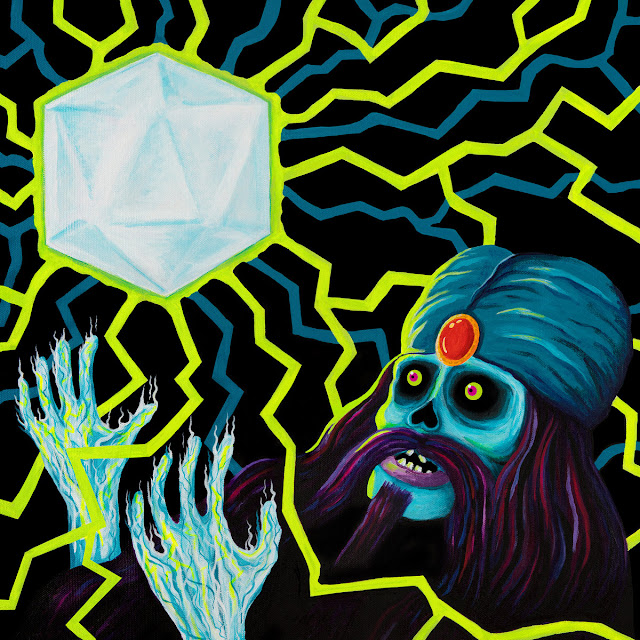 With sixteen tracks making up "The Eye of the Icosahedron" it would be foolish of us to try and analyse each track individually so the best thing would be to give you an overall feel of what is going on and try to somehow convey to you, the reader, why we think this album should be in your collection. "Scuzzy" is a word that more and more seems to be associated with bands from the Italian doom scene, a word often used to describe the corrosive guitars tones and partly buried vocals that grace albums by bands like Wizard Master, Demonio and Black Spell, a sound that some have dubbed  "Italian acid doom", now whether Californian based Dmitri Mavra has some Italian blood running through his veins we do not know but the "scuzzometer" reading on the majority of these sixteen songs is definitely in the red zone. The concept behind " The Eye of the Icosahedron" follows on from that which informed previous album "Mind Palace of the Mushroom God", with our hero still trying to un-weave himself from his curse and servitude to Orcus, the Lord of the Underworld played out against a backdrop of gnarly sludge and devilish doom interspersed with segments of acoustic dreaminess and synthesized serenity, Highlights are many but for Desert Psychlist the standouts are the bludgeoning "Descent into the Psionic Abyss", with its Electric Wizard flavoured distortion, gruff deeply buried vocals and discordant guitar solo, the acid drenched proto doomic "Mesmeric Scintillations" and the Zappa-esque " Time Crash". In fact there is not a track to be found here that does not have its merits and that includes those dream-like segments that cleverly form a bridge into the albums heavier songs,

" The Eye of the Icosahedron" is not an album for the faint-hearted, it does have moments of gentleness and and quiet reflection but those moments are just the precursor for some of the most gloriously scuzzy distorted and discordant doom and sludge you are likely to hear this side of the Apocalypse. The Psychedelic Wizard has a story to tell and we suggest you listen.
Check it out....
© 2022 Frazer Jones
Posted by Desert Psychlist at 07:26