Desert Psychlist had often wondered what might of came about if the Weedian triumvirate of Sleep, High On Fire and OM had merged the sound of all three bands onto one album, the Black Sabbath worshipping stoner riffs of Sleep and the harder edged sludgy doom and stoner metal of High On Fire blended with the Floydian flavoured eastern tinted psych of OM would certainly have made an interesting listen. We suspect that the resulting mix of styles might have sounded not too dissimilar to that of Achachak's new album "Planet Hashish".
Achachak are a stoner/doom quintet hailing from Vučipolje,Croatia consisting of Ante Kodžoman (vocals), Patrik Zelenika (guitar), Luka Gobin (guitar), Lovre Gobin (bass) and Milan Mijač (drums), the band have not always walked the Weedian path in fact their previous release "High Mountain" was an enjoyable if somewhat eclectic mix of styles and dynamics. This year however the band seemed to have found something stronger to smoke and have seemingly gone fully Weedian! 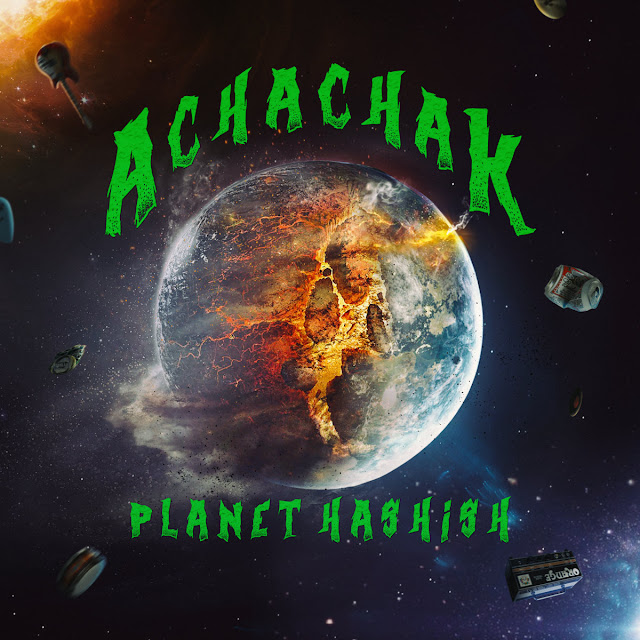 Along with those stronger smoking materials Achachak seemed to have also invested in some quality effects pedals because the fuzz that emanates from their amps on many of the nine songs that make up "Planet Hashish" has an almost tangible quality, especially on title track and opening number "Planet Hashish". It is almost impossible to stop your feet beating out an impromptu tattoo along to this low tuned slice of accessible and groove heavy stonerised doom with its incessant plodding rhythms, crunching riffs and hooky guitar motifs especially when those elements are twinned with a vocal that is delivered in a voice that suggests the singer might have been enjoying his time on this particular planet a little more than is probably healthy for him. "Breathe" follows and has a groove, feel and vocal attack very similar to it predecessor but hey you won't find us complaining as we could listen to these grooves all day long and still never get bored. It's all change for next track "Celebration For The Desert" a song that sees the band dipping their toes into lysergic waters with glistening arpeggios and eastern guitar motifs tiptoeing over a bass line and restrained drum pattern that has OM written all over it. Things get a tad heavier on "Orange Moon" both musically and vocally, the singer still sounding like he has been hitting the bong hard but with an added gritty edginess in his voice. "Weed Wagon" is up next and after a spluttering stuttering intro explodes into a punkish blues groove only this is a blues groove unlike anything you may have heard before. "Shamans Horse" is the perfect example of why we made comparisons with Sleep, OM and High On Fire in the first part of this review as here we find the band utilising the echoed vocal dynamics of OM over a repetitive riff (Sleep) and then exploding into full on stoner metal attack in the last quarter (High On Fire). For "Desert Eye" Achachak grab their water bottles and sun hats for an enjoyable stroll through desert rock territory while "The Hasheesh Eater" sees the band jamming a stop start groove enhanced by some scorching lead guitar work. Finally we arrive at "Fishermans F(r)iend" a delicate tale of mishap and death on a whaling expedition played out to a backdrop of gently picked acoustic and lilting electric guitar before the song finally erupts into a tsunami of thunderous drumming, growling bass and crunching guitar riffs in its final moments.

Heavier and more focused than its predecessor "Planet Hashish" sees Achachak jettisoning some of the more eclectic and diverse aspects of their sound and fully embracing the darker heavier side of their sonic attack, it is a brave move but one that works really well for them.
Check it out ....

Posted by Desert Psychlist at 03:01