If a band state that their musical influences range from Pentagram and Black Sabbath to Windhand, REZN and Mastodon then you can bet a pound to a penny that the band in question play music that is going to be of the heavy variety and most probably sitting somewhere on the doomic spectrum. Well this is exactly the case with Cologne, Germany's Purple Dawn BUT, and it is a big but, Purple Dawn also bring to the table, along with all their modern heaviness and doom, the swagger and strut of 70's proto-metal, hard rock and heavy blues, moulding these various musical elements into something perfectly suited to today's underground rock scene yet at the same time carrying an essence of rock's past glories, something the bands latest release "Peace & Doom Session Vol. II" (Electric Valley Records) will attest to. 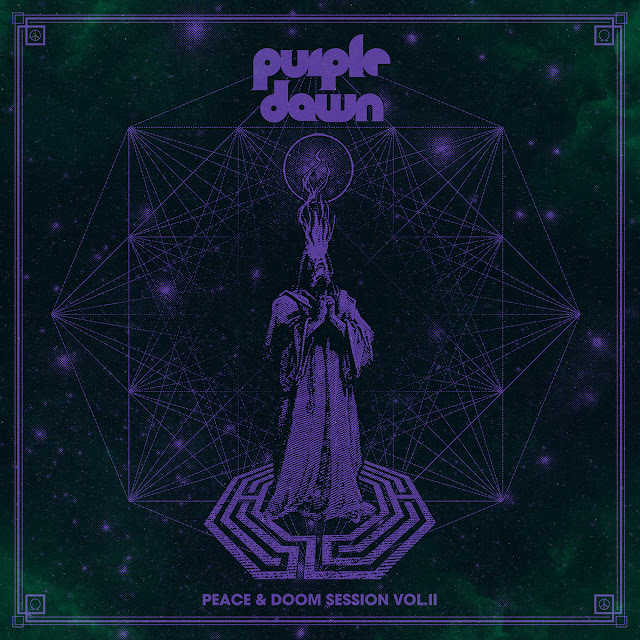 Those of you already on board with Purple Dawn will know that the "Vol. I" to this "Vol. II" was an in the moment live affair recorded in what the band call their "doom space". The release contained four songs plus an intro and an outro with the each piece running into each other with the only breaks between songs being the band speaking amongst themselves and whoever was in the room at the time.. Despite the slight rawness of its production "Vol. I" showed a band fully on top of their game even though they had only been together a short time before it was recorded.
For "Peace & Doom Session Vol. II" the band have jumped in bed with Electric Valley Records and although the music looses none of its raw edge the production on the new album is a little slicker and a touch more polished.
Instrumental "Bonganchamun" opens "Vol. II" and although Desert Psychlist has no idea about the origins of the songs title we are going to take an educated guess that it may have something to with the partaking of something herbal (tea?), but don't quote us on that. Whether we are right or wrong the song is a highly enjoyable proto-metal romp packed with crunching riffs and ear catching eastern guitar motifs driven by growling bass and a tsunami of percussive might. "100 Years A Day" follows and here we get our first taste of bassist Patrick Rose's forceful vocals, his voice is BIG  and powerful and possesses a gritty edge perfectly in tune with the equally gritty and full on musical onslaught that surrounds it. Rose's bass and Florian Geiling's solid tight drumming lay the foundations that drive this song but lets not underestimate the contributions guitarist Timo Fritz brings to the party, his array of riffs ,bluesy licks, and wah drenched solos are the icing on what proves to be a very tasty cake indeed.  Next song "Old Fashioned Black Madness" begins with one of those stuttering riffs we have all heard a thousand times before but never get sick of before erupting into a groove that mixes its dynamics between old school hard rock and proto flavoured doom, the band paying tribute to bands like Mountain and Cream as much as they are  Pentagram and Black Sabbath. "Power To The People" is basically a heavy blues rock number that boasts a quiet/loud/quiet dynamic fronted by suitably grizzled vocals and enhanced by scorching guitar work while "The Moon Song" is one of those songs so good you'll never want it to end, its addictive groove, superbly delivered vocal melody, lysergic middle section and swirling guitar solos will have you reaching for the repeat button over and over again. "Death To A Dying World" is up next and opens with a guitar motif not too dissimilar to that which opens (Australian proto-metal legends) Buffalo's "Shylock" then erupts into a groove just as powerful, however where Buffalo were content to just jam on a riff in the middle section of their song Purple Dawn prefer to take things into a more heavy psych direction, Rose laying down deep grizzled bass over Geilings subtle restrained drum patterns and Fritz adding appropriately psychedelic guitar colourings and textures. Finally we arrive at "Bongnchamun Pt. II" an extended reprisal of the opening instrumental that serves as the perfect rounding off of what has been a truly enjoyable 40 plus minutes of quality rock music.

The blurb on the Purple Dawn's Bandcamp page bears the legends "worship the riff" and "praise Iommi"  and although we agree with both statements the latter might suggest, to some, that the grooves they will be hearing on "Peace & Doom Session Vol.II" will be of a Sabbath-esque nature, this is not the case. Black Sabbath may have been one of the influences in shaping this German trio's sound but it is not the overriding one, the bands sound is formed from amalgamation of all their influences from both the past and the present.
Check 'em out ......
© 2022 Frazer Jones
Posted by Desert Psychlist at 03:59