South Australian combo Planet Cactus describe their sound as "intense stoner rock fused with dirty psychedelic raga and grindy doom", they also go on to ask you to "imagine if Enya got kidnapped by Charles Manson, Lemmy and Bhagwan and they formed a heavy psychedelic doomy grunge band", sounds intriguing doesn't it and that's because it is. Planet Cactus, Michael Field (drums); Rebecca Lyon (vocals/rhythm guitar); Ross Martin (synth); Liam O'Sullivan (bass) and Sean Tilmouth (lead/rhythm guitar), hail from Adelaide and jam a slightly off kilter groove that is sometimes heavy, sometimes heady but is at all times breath-taking, something their debut album "Double Rainbow" will attest to. 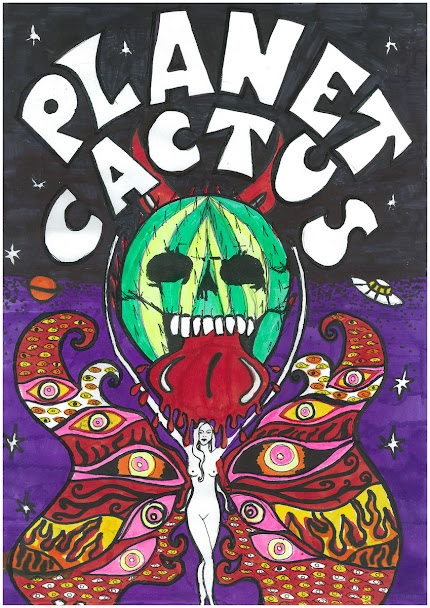 Things kick off like a barfight in a western with "Hunter S", the songs raucous guitar tones, grizzled bass lines and pummelling drum patterns create a groove that has a sludgy hard/stoner rock feel, a feel further enhanced by its synthesised undertones and scorching blues tinted lead work, however, what you might not be expecting are the vocals accompanying that groove. Rebecca Lyon, who also doubles up on rhythm guitar, is not a growler, screamer or crooner, her voice is not the strongest you will hear fronting an underground rock band but what she lacks in power she makes up for in tone, her vocal delivery possessing a lilting feyness in its middle register rising up to a waifish rasp at its upper limits. Lyon's middle register really comes into its own on the epic title track "Double Rainbow" her voice wafting serenely over a backdrop of eastern tinted grooviness buoyed by Martin's synthesised flourishes and only just anchored to earth by O'Sullivan's boneshaking bass and Field's solid thunderous drums, Tilmouth filling in the spaces with superbly crafted solos that soar and swoop around Lyon's vocal with a lysergic liquidity. It's back to the riff heavy hard rock for next track "Mongrel" with Lyon's reverting to a more aggressive vocal tone while locking her guitar in with O'Sullivan's bass and Field's drums to deliver a stuttering stop start groove over which Tilmouth peels off another of his fret-blurring solos. "Banana" follows and is a song that can't decide if its an angsty punk rocker, a heavy blues or a psychedelic lament so settles on being all of them. Penultimate track "Mono" is a slow burning torch song with an occult rock(ish) feel in its initial stages that gradually builds layer by layer until finally exploding into a hard rock/heavy psych wigout that sees Tilmouth shredding like a man possessed. After a few brief moments of silence we are presented with a reprisal of the albums hottest track "Double Rainbow" only this is a more compact version, whether this is a bonus track not intended for a vinyl release Desert Psychlist doesn't know but its a tune well worth hearing again. 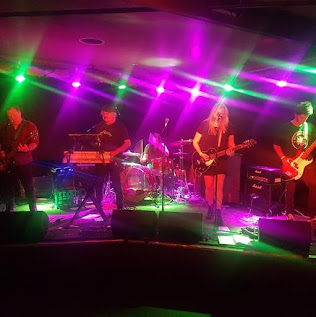 Planet Cactus' sound is made up of many elements pooled from a vast array of influences, they are a band who can be raucous just as much as they can be transcendental, the one thing they can't be however is ignored. Despite its sometimes ethereal vocal tones and its propensity to take off on lysergic tangents there is a pleasing sludgy rawness to "Double Rainbow" that is highly addictive and equally enjoyable.
Check it out .....
© 2022 Frazer Jones
Posted by Desert Psychlist at 02:59