Slovakian trio Void Odyssey play psych tinted instrumental doom spliced together with sampled narrative begged borrowed or stolen from various old horror movies, radio broadcasts and documentaries. Nothing new there i can hear you say, this has become common practice for bands in this genre, and we would have to agree with you but there is something about the way those samples are integrated into Void Odyssey's relentless sonic attack on their self-titled debut EP that takes things to a whole new level of enjoyment and negates the need of any vocals. 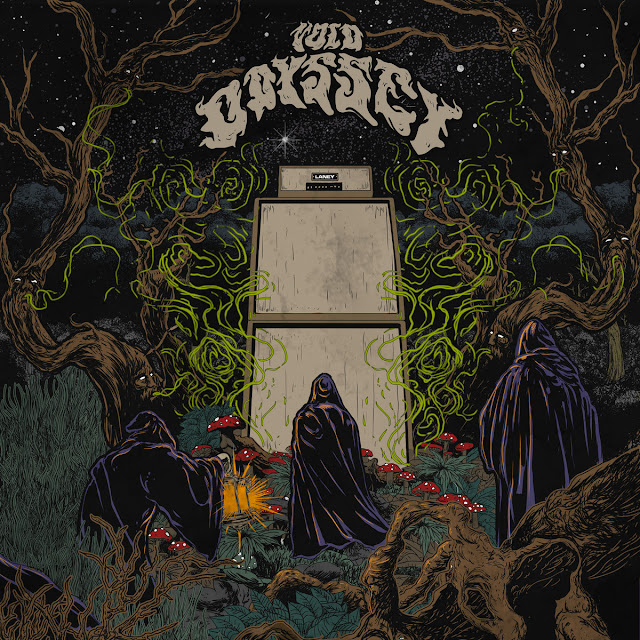 Before we get down to the task of dissecting every power chord , bass line or drum beat of the three songs that make up "Void Odyssey" let us give a shout out to  Mont Doom the artist whose amp worshipping illustration graces the cover of this face melting tome. The painting of three cowled figures standing in  reverence before a huge Laney stack, surrounded by gnarled smoking trees and shrooms, not only captures perfectly the lysergic elements of Void Odyssey's sound but also pays a thinly veiled tribute to Black Sabbath the band at the root of everything we deem doomic.

Title track "Void Odyssey" opens with a sample of what we can only assume is two law enforcement officers discussing something apocalyptic, "are they slow moving chief?" asks one voice, "yeah they're dead, they're all messed up" is the reply, a statement followed by a low rumbling heavily distorted bass motif that is then joined by the guitar and drums in an equally rumbling doomic groove. We mentioned the word "relentless" in the opening piece of this review and although describing something in those terms can sometimes be seen as derogatory this is not the case here, in fact it is the "relentlessness" of this piece that is its biggest asset, yes it does sit very much on one groove but it is a groove that is constantly building and one that incorporates into its attack subtle psychedelic elements as it builds, elements enhanced by swirling eastern flavoured guitar textures and those occasional well placed samples. "Aberration" follows and begins with a hazy guitar riff played over a tribalistic drum pattern that combined with its sinister sampled narrative, telling of being born to serve Satan, gives the songs initial stages a Colour Haze meets OM type meditative feel but then in comes the bass and suddenly the songs dynamic descends into a low slow heavy doomic groove with crunching guitar riffs and thundering percussion, accompanied by yet another well chosen sample, taking it to its conclusion. "Reefer Rites" brings things to a close with a song that, like its predecessor, starts hazy and languid, an echo drenched guitar arpeggio holding sway until another well placed sample heralds in the inclusion of the bass and drums and the eruption of the song into heavier territory. Once the bass and drums hit into this doomic groove they rarely deviate from it but with the addition of some really cleverly inserted samples and an ear catching circular guitar motif the repetitiveness of the songs main refrain does not ever become an issue and instead works for the song rather than against it. 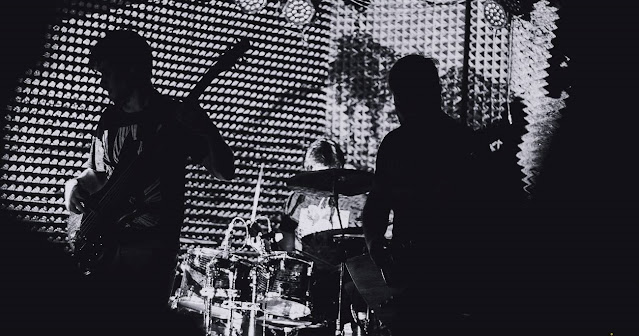 There are some within our scene who find instrumental music a bridge too far to cross and that the lack of lyrics and a singer somehow detracts from a bands overall appeal, Void Odyssey understand this to some extent and so embellish their jams on their debut EP with sampled narrative gleaned from a variety of sources, these samples are not chosen at random however but are specifically picked to fit in with the mood and feel of each musical piece and by doing this they add a dynamic to their instrumental jams that might not have been there otherwise.
Check 'em out ......
© 2021 frazer Jones
Posted by Desert Psychlist at 03:35