THE SOCIETY OF BANDITS ~ POSTCARDS FROM THE KALI YUGA ...... review

Texas power trio The Society Of Bandits, Jason Eckblad (vocals/ bass); Brandon Becker (guitar/vocals) and Matthew Smith (drums/vocals), tell us in no uncertain terms that they are "here to remind you that rock and roll is meant to be loud, abrasive and unapologetic" and that "they play a unique brand of southern rock and they play it loud". Desert Psychlist is in total agreement with their first statement and after listening to the trio's latest release "Postcards From The Kali Yuga" we can confidently endorse the fact that their the second statement holds water also. 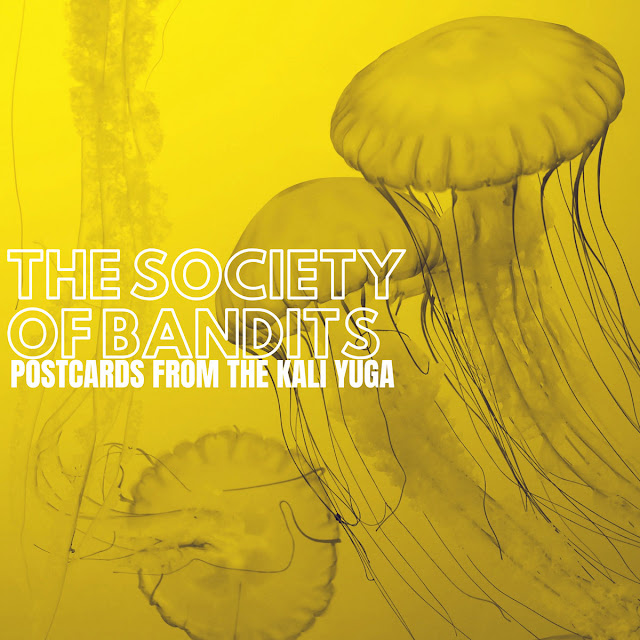 If you were perusing the endless pages of Bandcamp checking out album artwork for something you think might be of interest, as many of us do, then you might, if you were not familiar with The Society Of Bandits, have passed over "Postcards From The Kali Yuga" thinking that the watercolour painting depicting elegantly wafting jellyfish pointed to something a little ambient and gentle but how wrong you would be. What you would discover when dropping the needle on this, the bands third release, is a collection of raucous and gritty southern flecked stonerized rock and metal that is as big and as bold as the state it was birthed in. From opening track "Julius" through to its last track "Electric Cannon" what you get is a no holds barred in your face romp packed to the rafters with crunching guitar riffs, tight solid rhythms and cleverly arranged, and executed, three way vocal trade offs, off kilter harmonies and gritty vocal leads. For those looking for comparisons to other bands well forget it because The Society Of Bandits take on that "southern thang" is a unique one that doesn't follow any of the usual rules, if you are expecting to hear something that might tie them in with the Lynyrd Skynyrd's Blackfoot's and Molly Hatchet's of this world then you are also going to be disappointed yet despite this the bands "southernisms" are something that constantly shine through and makes their presence felt even when the band are tackling something as unexpected as a cover of Queen's "Fat Bottomed Girls" and it is these "southernisms" combined with the bands uncompromising metallic attack and intelligent vocal arrangements that make "Postcards From The Kali Yuga" essential listening for anyone with an interest in music that struts its stuff with a "southern" swagger.

Its been almost four years since The Society Of Bandits released their last album and many might have thought they had gone the way of so many other bands and faded away never to be heard from again but thankfully this was not the case and with "Postcards From The Kali Yuga" these Texas groovemeisters have returned with a renewed vigour and a collection of huge sounding raucous grooves that are as loud, as abrasive and as unapologetic as they promised us they would be.
Check 'em out .....
© 2022 Frazer Jones
Posted by Desert Psychlist at 12:04