Washington's Swamp Lantern, Jeff Kastelic (guitar/vocals); Jonny McIntyre (guitar,/vocals); Stu Hodge (bass/vocals) and Easton Sartor (drums), are a hard band to pin a label on, the Bellingham quartet jam a groove that blends stonerized doom with metals heavy and blackened that is then flavoured with elements of post-rock and psych, it is a sound that is sometimes brutal, sometimes laid back and sometimes challenging but is one that is at all times highly enjoyable. The band return this year with "The Lord Is With Us" the highly anticipated follow up to their well received 2000 debut "Phantasms". 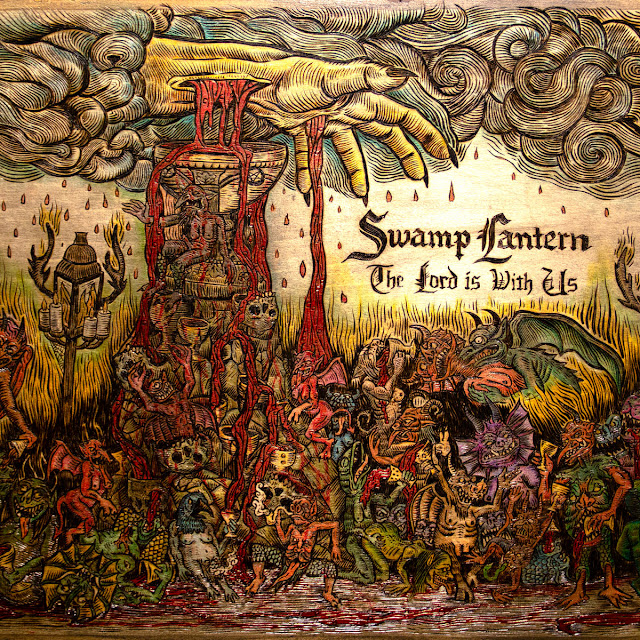 If there was a criticism to be levelled at "Phantasms" it would be that it lacked a little "oomph" in places, this had nothing to do with the bands songcraft or musical abilities but was more due to its production and mix which applied a little too much polish to proceedings and tended to round off the bands natural raw edginess, however for new album, "The Lord Is With Us",  a balance has been found that allows the bands more quieter reflective moments to glisten and shine but then brings in the rawness and growl for when the dynamics get a little brutal and heavy.  First song "Blood Oath (On Pebble Beach)" is a prime example of this balance, the song opens up with crunching heavily distorted guitars jamming a riff pushed by rumbling bass and thunderous drumming, then suddenly subsides into a gentle post-rock meander that sees liquid arpeggios replacing reverberating power chords and shimmering percussion taking the place of pounded drum skins before gradually building in intensity and ending in a blaze of blackened metal bluster. Vocally this song has an almost operatic feel that mixes wordless choral singing (courtesy of  guest vocalist Aimee Wright) with mournful sounding harmonies and also includes the occasional smatterings of raucous vocal harshness, in other words there is something for everyone to be found here. Next song "Still Life" boasts the type of reverberating liquid guitar tones, that would not sound out of place on a Chris Issak or Roy Orbison album, twinned with a languid gothic tinted vocal, Swamp Lantern being Swamp Lantern though it does not come as a surprise when the groove slowly increases in heaviness and takes on a more doomic dynamic replete with ear catching guitar motifs and cryptic lyrics that blend drug references with a thinly veiled green message. "Graven Tide" follows and is a song that never stays in one place long enough to to be pinned down to one style, post-rock textures, Celtic tinged guitar harmonies and demonic vocals all combine to create a weird but exhilarating mish mash of styles driven by a strident blackened bass and drum groove. Title track "The Lord Is With Us", an instrumental, is a song that has a film soundtrack vibe due to its folkish/Americana dynamic that rightly or wrongly had Desert Psychlist visualising a running scene not unlike the one that opens Michael Mann's blockbuster movie  "The Last Of The Mohicans". Final song " The Halo of Eternal Night" is a beautifully constructed opus that builds layer by layer, the song swinging neatly from a mournful ballad to an emotive torch song before erupting into a crescendo of blackened doomic splendour over which guest guitarist Bobby Savage unleashes a screaming shredded solo, the song finally closing its account the way it started gentle and placid. 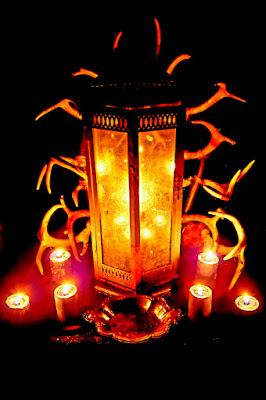 "The Lord Is With Us" is an album full of contradictions, an album that brutalizes the ear drums one minute then gently soothes them the next, an album that dips its toes in waters situated at the harsher end of the metal spectrum as well as those at its more ambient opposite. Where Swamp Lantern take their music next is anyone's guess, could they take the Opeth route and move towards a more prog orientated sound (they certainly have the chops) or they could go the other way and just get heavier, more brutal and more intense, only time will tell.
Check 'em out .....
© 2022 Frazer Jones
Posted by Desert Psychlist at 01:22