Mexico is not a country that has featured too much on the pages of Desert Psychlist and that is somewhat remiss of us because the Central American country has a very vibrant and diverse underground scene with many really good bands to be found within its borders, Bar de Monjas, Vinnum Sabbathi and Spacegoat to name just three. Today we aim to somehow readdress our lack of coverage by introducing you to Oculto,  Adán Nájera (bass/vocals) and Gerson‎ ‎Paredes (drums), a two piece combo from Mexico City who bring to the table a heady mixture of thrumming heavy doomic instrumentals with songs decorated in mournful, almost monastic, vocal tones sang in their native Spanish tongue. Last year (2019) the duo released their debut "Caos, Cosmos y Cataclismos", which Steve Woodier of Deathrattle Podcast called "Suffocating doom with enough fuzz to gag on", this year they come back with more of the same with their second outing "Penumbra". 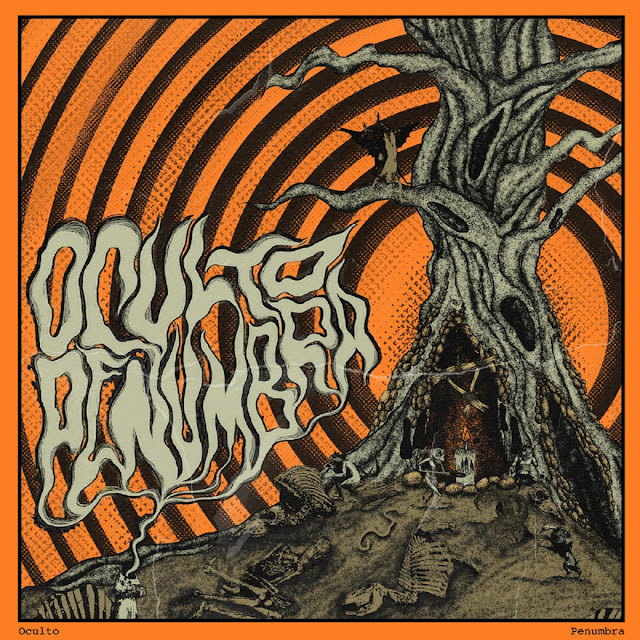 "Penumbra" is an album full of heavy doomic tomes that although not brutal are nonetheless dank, dark and sinister as you will discover for yourselves as the first strains of opening track "Satánica" assails your senses with its menacing low slow grooves and Gregorian flavoured vocal mantras. Instrumental "Llora Sangre" follows and although a little less pedestrian than its predecessor it still carries that same feeling of brooding menace and ominousity. "Memento Mori" sees the return of the vocals, this time delivered a little less mournfully, and finds Paredes bucking convention and concentrating most of his attention on the upper reaches of his drum kit accompanying Najera's vocals and heavily distorted bass in a crescendo of crashing cymbals. Next up is "De la Penumbra" an instrumental spliced with sampled demonic narrative (reversed for greater effect), that in its later stages throws the spotlight full on Paredes drumming skills, the percussionist going hell for leather all over his kit while Najera keeps things grounded with a rumbling growling bass riff. An uplifting sample of a band playing music at what sounds like a fair introduces "Danse Macabre" but is soon countered by Najera plucking out low reverberating notes from his bass only really upping the pace of his delivery when Paredes adds his weight to the proceedings, the song swinging back and forth between slow and really damn slow throughout its duration. If things were not sinister enough then the organ music that heralds in "Fvnebre" and sticks around for the duration of the song ramps things up to a whole new level. "Caminando entre muertos perderás la esencia de vivir." (translation: "walking among the dead you will lose the essence of living") sings Najera in dark ominous tones that suggest he knows something we don't. Strangely "Fvnebre" is the only song on "Penumbra" where Oculto really allow themselves to break away from their funereal roots and really take wing, the screaming guitar solo that takes this song into the stratosphere in the latter part of this piece is breath-taking and the strident groove behind it is much closer to stoner-psych than it is to the stoner doom that has dominated proceedings up to this point. Final song "Zangbeto" maintains a little of the stridency of its predecessor by jamming a tribalistic groove that finds Najera utilising an almost percussive attack to his bass strings while Paredes seems to be trying crash and pound his drum kit into dust beneath him, the song finally finishing not so much in a crescendo but in more of a noisy slow winding down. 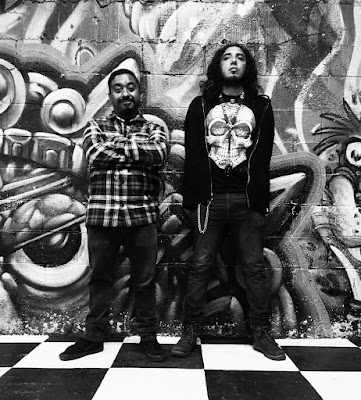 There is a ritualistic almost religious feel to many of the songs gracing "Penumbra", and when we say "religious" we are not talking happy clappy hymns to the white haired man strumming his harp in the Kingdom of Heaven but songs referencing the workings of his ex bandmate Satan who left to form his own group due to irretrievable musical differences. If God and Satan ever decide to put their differences aside and get back together for a jam and are looking for a bassist and drummer then they wouldn't go far wrong by giving Oculto a call.
Check 'em out ....
© 2022 Frazer Jones
Posted by Desert Psychlist at 03:48