Think California and you will probably immediately think of  blue skies and sunshine but for two Californian residents blue skies and sunshine are light years away from where their heads are at. For Donny Browne (guitar/vocals) and Alex Gerber (drums/percussion), the two guys who make up The Holy Corrupt, it is the darker side of life that holds sway they are a band whose musical themes are informed not by muscle cars, bikini clad beauties and the warmth of the sun's glow but by ornate horse drawn hearses, black clad hex casting crones and impenetrable mist covered landscapes, these themes delivered in grooves the band describe as being "heavy, sleazy, trippy, & slow", dynamics they use to great effect throughout the seven songs that make up their self-titled debut album "The Holy Corrupt" (Dead Sun Records). 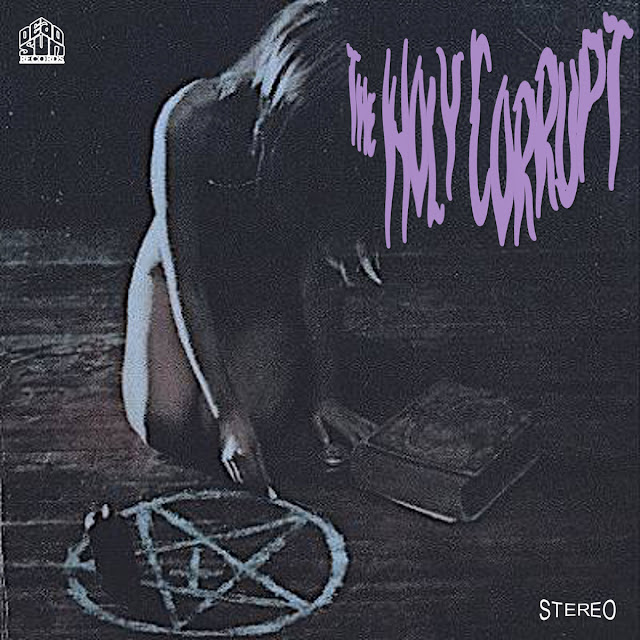 THC have an agenda and that agenda is to make " heavy, sleazy, doomy tunes to get stoned to" and it would be foolish to say they do not succeed in this endeavour, if there was ever a music that was better suited to taking a hit/lighting one up to then we at Desert Psychlist are yet to hear it. This is a band who play doom of the slow and low variety that has a hazy lysergic undercurrent perfectly suited to those of you out there who might enjoy smoking the occasional exotic cigarette, however please don't despair if you are not a fully paid up member of the Society of Weedians because there is still much to enjoy here. "The Witch Is Coming" kicks things off slow. low and heavy and for the most part stays that way for its duration, Browne crunching out  thick reverberating and distorted power chords that seems to hang in the air for an age before he brings his pick down on the strings to execute another while Gerber adds touches of  resounding thunder to the proceedings via his deliberate but nevertheless busy drumming. By now you are probably making comparisons with stoner doom/desert legends Sleep but THC's grooves are so sedate, so unhurried they almost make Matt Pike's boys look like a thrash band and Sleep certainly didn't have a vocalist of Browne's quality fronting their sonic onslaught. "I Want To Touch You" follows and despite its rather romantic sounding title is another slice of dank dark crushing  doom decorated in gnarly fuzz and distortion driven by the sort of  punishing percussion that makes you think of industrial machinery rather than one man with a couple of sticks hitting animal skins. The song also boasts a great vocal, Browne's clean strong baritone, edged with longing and melancholy soars majestically above the mayhem being despatched beneath it and in doing so adds a very pleasing degree of gravitas to what is basically a love song. "Backwoods Banshee" ups the tempo from stoner doom to something more akin to  "proto" pace but we are not talking a Sabbath-esque gallop across the fields here more a laboured preamble through thorny undergrowth. The band do however pepper things up with a few spicy curveballs along the way with Browne briefly reverting to a more demonic vocal approach mid song as well as the duo making a nicely executed side step into heavy psych territory that finds Gerber doing his best Bonham impersonation and Browne discovering is inner guitar hero .Up next is "Spacer" which is basically a chance to catch your breath, it is an experimental piece that unfortunately does nothing to enhance the bands reputation but then does nothing to diminish it either. The heavy psych aspects of the bands sound, briefly hinted at on "Backwards Banshee," are given free rein on instrumental "Earthed" while "Inflicter of Karma" finds the band back in low, slow and heavy stoner doom territory but this time with Browne's vocals laid a little further back in the mix. Final track, the epic "Come To Dying" could be the heaviest, most doomic heavy psych tome committed to tape in the history of psychedelic doom metal, it is a song with a wickedly dank and dark demeanour made even more dank and dark by Browne's guitar tones , his amps emitting a dark thrumming sound awash with gritty fuzz and distortion that when combined with Gerber's earth-shaking rhythms and the guitarists own powerful vocals creates a brooding atmospheric that has an almost gothic quality. 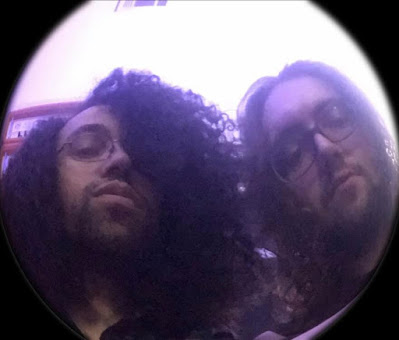 "The Holy Corrupt" is everything doom, as a music, should be, it is a dark dank atmospheric opus that lumbers and lurches along at tempos just short of crawling, it is an album tinted in psychedelic colours and textures but an album not overpowered by them, it is, as the band have already stated, an album to get stoned to.
Check it out ....
© 2021 Frazer Jones
Posted by Desert Psychlist at 00:35