That age old question arises on Desert Psychlist today, do we, a UK based review site, use the Anglicized spelling for the largest of the Balearic Islands or do we go with the Spanish/Catalan spelling, in other words do we go with Majorca or do we go with Mallorca? Well since the subjects of this review both hail from the aforementioned island and are, for "Mallorca Stoner Vol. 1", signed to Discos Macarras Records, a Spanish label based in Catalonia, we will therefore go with Mallorca.
The two bands in question are Bis-Nte, Maria J (vocals); Vicente Paya (guitars); Andrea Trujillo (bass) and Pablo Herrero (drums), and Milana, Pedro Ingles (vocals); David Oliver (guitars); Guillem Morey (bass) and Edu Biurrun (drums), of these two bands it may be Bis-Nte who may be the more familiar having released one full length album," Ancestral Punishment" (Xtreem Music) prior to this while Milana have to date only released one single "White Buffalo" (which also features on this split). 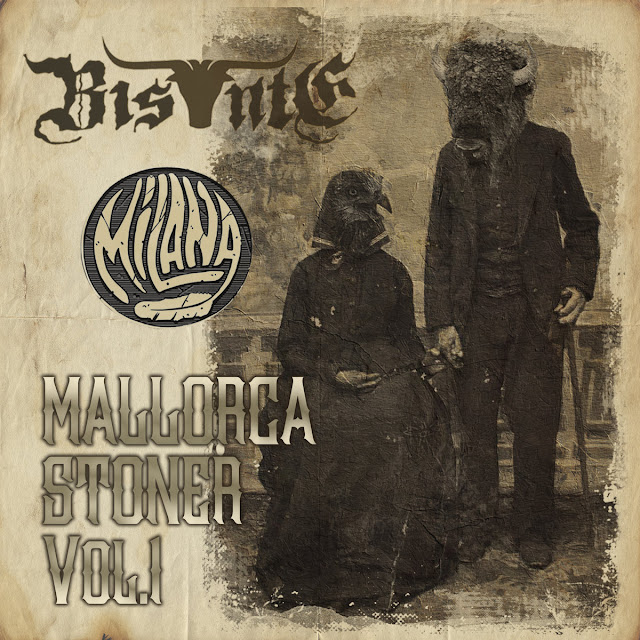 There are two distinct and different approaches to the doom genre to be found on this marvellous little gem of a split, on one half you have two songs from Bis-Nte a band who tread territories not too dissimilar to those inhabited by Windhand, Acid King and Uncle Acid and the Deadbeats while on the other half you have two tracks from Milana a band with a much more proto sound that incorporates elements of stoner, classic and hard rock as well as a touch of soulful bluesy swagger into its sonic attack. Now it might seem strange to some to couple together two bands who come at the same genre from two completely different directions but then  just as strangely this coupling pays unexpected dividends. Bis-Nte's  two songs, "Unbalanced" and "Involuntary Act" may have their roots planted deep in the fetid soil of unhallowed ground but for all their dankness and melancholy these songs are not one-dimensional dirges, both songs have uplifting moments where the gloom clears and a ray of light comes shining through and most of those moments come courtesy of Maria J whose vocals are delivered in unhurried smooth clean tones and work as the perfect counterbalance for the superbly dank dark grooves the rest of the band lay beneath her. Milana's two songs, "White Buffalo" and "Forest Tale", in contrast start their lives in the sunshine and then routinely dip their toes into darkness, the band hitting grooves on their brace of songs that are for the most part crunching heavy and upbeat but are prone to sudden dives into murkier waters, tarrying there for a while before just as suddenly resurfacing into the light. Milana, like Bis-Nte, also boast an impressive vocalist, Pedro Ingles has the  roar of a lion at the top end of his range but croons with an unexpected soulful grittiness at the other end of his vocal spectrum, both dynamics perfectly complimented by the band he stands in front of. 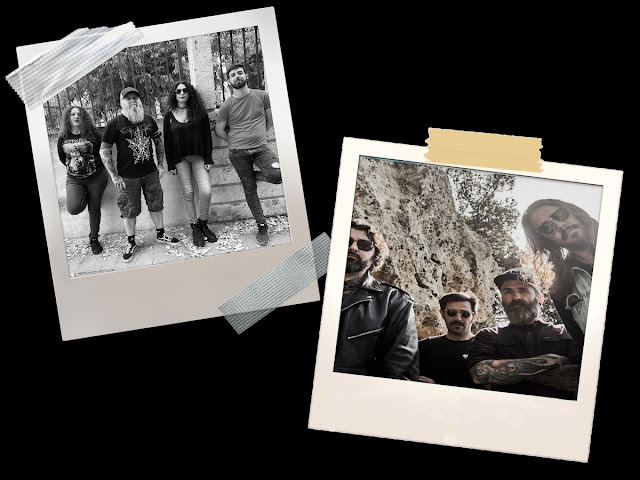 Putting two Mallorcan bands together on one release is a great way to promote Mallorca's somewhat overlooked underground scene, it is also a great way to throw a spotlight on two bands whom may have otherwise slipped under the radar if it wasn't for this diamond of a split.
Check it out .....
© 2021 Frazer Jones
Posted by Desert Psychlist at 04:51