Most of you reading this probably came to this whole stoner rock/ doom/heavy psych scene via Kyuss, Fu Manchu and bands of that ilk but Desert Psychlist came to this scene from a slightly different route, we arrived at this destination thanks to discovering a little label called Tee Pee Records and their roster of artists, a roster that included bands like Assembled Heads In Sunburst Sound, NAAM and Mirror Queen, only discovering the joys of Kyuss etc. later on. One Tee Pee band in particular stood out for us head and shoulders above the rest and that band were Canadian psychonauts Quest For Fire, the band only made two albums before calling it a day but those two albums  still, to this day, get regular spins on our decks at Stonerking Towers. So why should we mention this here on a review of an album from a completely different band, the reason my friends is that the  shiver up the spine we got from hearing Quest From Fire's two albums of hazy, slightly indie flavoured, slightly shoegaze grooves returned today when we pushed play on French trio MONAS' self titled debut "Monas" 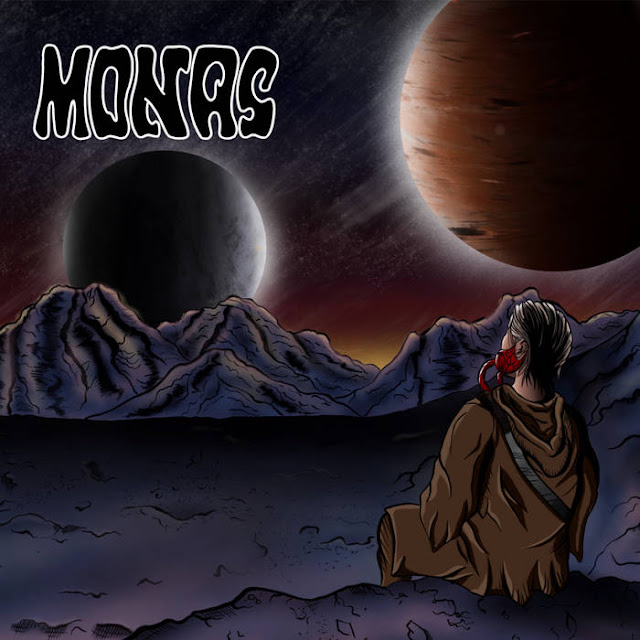 The strong psychedelic element that was so integral to Quest For Fire's sonic attack can also be found on MONAS' debut but is tempered by textures that are a little danker and darker than those executed by the Canadian outfit, not so dark and dank that they could be considered doomic but certainly edging towards that dynamic. Opening track " Lone Warrior" demonstrates this perfectly by beginning with a  deeply distorted bass motif, accompanied by drums, that is then joined by guitar on a groove that is not so much thundering as raucous and crunching but then dissipates slightly when the harmonised vocals enter, delivered clean and slightly hazy. Suddenly and surprisingly the haziness of the vocals is replaced by a few bars of sludge like roaring before things return back to normal and the song plunges headlong towards its finale. "Fallen Astronaut" follows and eases a little back on the raucousness by replacing it with some nicely gritted fuzziness and decorating that fuzziness with a clean perfectly pitched vocal that alternates between being up front of the mix and buried slightly within it. Next track "Anguish Pipe" mixes its shoegaze and heavy psych up with touches of Sabbath-esque proto-doom while final track "Mindroad" starts its life by going in completely the other direction, it's initial groove having a liquidity and lightness of touch far removed from that which has gone before, this respite does not last long however and suddenly the groove explodes into a glorious heaviness, not a brutal one dimensional heaviness but one flecked with bright psychedelic colours and lysergic textures over which a lilting hazy vocal holds precedence.

If you have a hankering for those hazy psych drenched grooves that made Tee Pee Records such a go to label for that genre of music but are also partial to a bit of grittiness in your lysergic laments then you won't go far wrong by giving MONAS' debut a listen, you will not be disappointed.
Check it out .....
© 2021 Frazer Jones
Posted by Desert Psychlist at 06:11