DESERT DRUID AND THE ACID CARAVAN ~ THE VVITCH .... review

Horror movies have been the inspiration for so many bands over the years, let's remember that it was a horror movie that inspired four young Birmingham lads to change their name from Earth to Black Sabbath and also pen a song of the same name that would then propel their careers into the stratosphere and would Stourbridge's Witchfinder General have been called Witchfinder General if they hadn't seen Vincent Price's portrayal of the odious Matthew Hopkins in the 1968 British horror classic. Of course this doesn't only apply to English bands, all over the world the horror movie genre has had the same effect of inspiring bands to explore darker themes than those of teen love and broken hearts, a fact that brings us nicely around to the subject of this review. Brazil's Desert Druid and the Acid Caravan, F. Klinger (vocals/bass) Nass (vocals/guitar) and E. L (drums), are a band who readily hold their hands up to being inspired by early horror movies which in turn has led to an interest occultism and witchcraft the band weaving these influences and interests together to create a musical tapestry that mixes cloying dank doom with atmospheric heavy metal to create a sound that is both heavy yet at the same time strangely ethereal, so without further ado let us introduce you to "The VVitch" 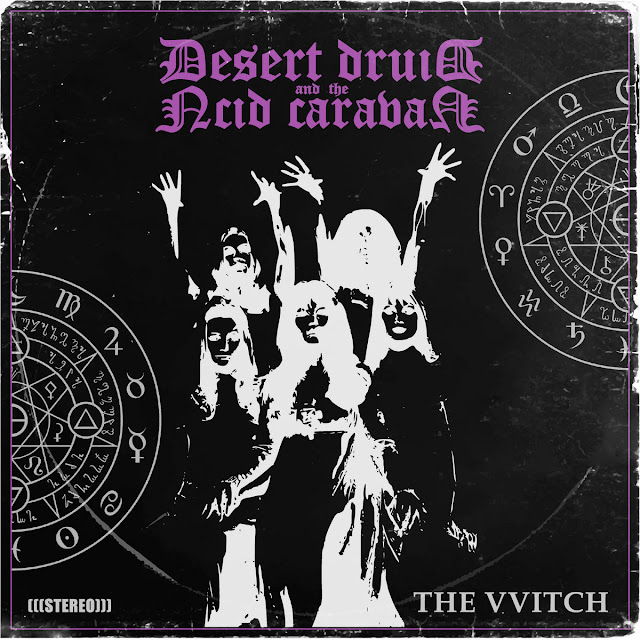 If there is one complaint Desert Psychlist has about Desert Druid and the Acid Caravan's debut release it is that it is an EP as opposed to being a full length album, as the last note fades on these four songs you will soon find yourself hoping for just one more song, and we are sure if another song did miraculously appear you would be then wishing for yet one more, such is the impact and appeal of this Brazilian bands music. We suppose you could label what DDatAC do as proto-doomic as much like the aforementioned Black Sabbath there is an air of bluesy swagger in what they do but there is also something else going on here. The four songs that make up this little gem of an EP, "The VVitch", "Total Madness", "Mistress of Black Heart" and "Witching Hour" are not complex or convoluted, in fact they are fairly simplistic in construction just a blend of crunching downtuned  riffs and thunderous rhythms coated in clean, not overly powerful, vocals however it is this simplistic approach and the way the band combine those riffs, rhythms and vocals with well chosen movie soundbytes and the occasional sound effect that makes this release stand out a little taller and prouder than others of a similar sonic attack. 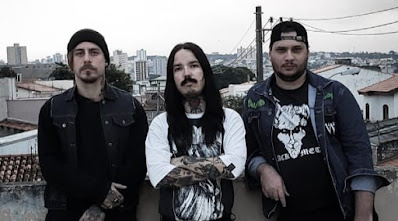 You could no doubt find less abrasive and better produced releases than "The VVitch" within the doom/occult genre but why would you want to, it is its slightly raw production twinned with the gritty gnarliness of its guitar tones, the uncluttered and untamed passion of its vocals and the wild unorthodox approach to its rhythms that is this EP's biggest selling point, change any of those elements and you would lose all that is good about this cracking little diamond in the rough.
Check it out ....
Posted by Desert Psychlist at 06:46