The Brothers Keg are a Psychedelic Doom/Sludge/Stoner Metal Band consisting of Psych Stoner Rockers STUBB members Tom Fyfe on drums and Tom Hobson on lead guitar/vocals. Helping round up this highly talented trio is Paul Rosser on bass/vocals.
The bands debut album "Folklore, Myths and Legends Of The Brothers Keg" is a concept album of sorts inspired by classic 80s movies such as Conan The Barbarian and camp classics such as the Hawk The Slayer, ATOR movies and the awesome album cover owes a huge nod to Masters Of The Universe. 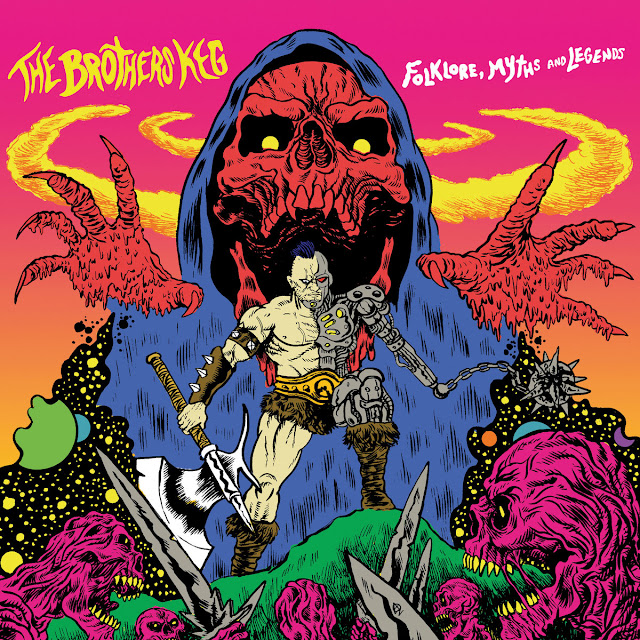 "Folklore.Myths and Legends of the Brothers Keg" tells the story of The Brothers Keg and their battle against a tyrannical overlord. This allows the band to go way out crazy with their lyrics and create a more fantasy driven style album whilst allowing the music to remain firmly rooted in reality with the band showing their love and appreciation for bands such as CONAN, Mastodon, Beastwars, KYUSS and Slomatics with a deeply progressive Sludge/Stoner/Doom Metal sound that can be quite spaced out in places.
The opening song - "Morsemen" - fully gets the ball moving with a nine minute blast of Mastodon based grooves but with a more Punk Rock aesthetic allowing The Brothers Keg to have fun with their music and bringing a more adventurous lo-fi drive to the album. The vocals from Tom and Paul are grounded with the heavy guitars and drumming thus setting a battle like atmosphere for the later stages of the story and album to thrive upon.
The album has a few short narrated interludes driving the story along and it’s a cool touch as this helps make you feel part of the story. The second track "From The Records Of Arthur Shnee"  is one of these interludes and leads into another exciting chapter of The Brothers Keg with "No Earthly Form".
"No Earthly Form" has a more Drone based quality to it ,especially in its the vocals, with the heavy grimy sounding guitars reminding myself of BEASTWARS in certain places. The story feels like it takes a different direction here but it all comes together on the later stages of the album. This song, another powerful slab of Psychedelic Doom/Stoner Metal, comes alive when the band slow things right down and then play some brutally heavy riffs, riffs that made my head-bang and caused me to lose myself in the moment.
"The Ice Melteth" is another spoken-word interlude which gives more clarity to the story thanks to the wonderful softly spoken skills of Wendy Brown. The Post-Rock and Ambient based riffs bring a more peaceful feeling to this album but it is only a brief respite before the outlandish story fully takes flight and starts to make sense.
The next two songs " Introducing The Brothers Keg" and "Brahman"  are the standout songs on the album, the story now fully realized we go into battle with The Brothers Keg and the deeply heavy pounding riffs have an almost “BATTLE-CRY” based energy to them. The music is OTT but always inventive with "Brahman" being one of the best songs I’ve heard this year. "Brahman" is wonderfully epic with band playing some of the best sounds on this album and will appeal to fans of Mastodon and CONAN, its Doom based atmosphere inspired by one of the band members seeing UK Doom Metal Royalty BONG live in concert.
The rest of the album continues with the exciting battle that The Brothers Keg lead you upon with three more songs and more brilliantly entertaining riffs that will impress even the most jaded Rock/Metal fan currently out there 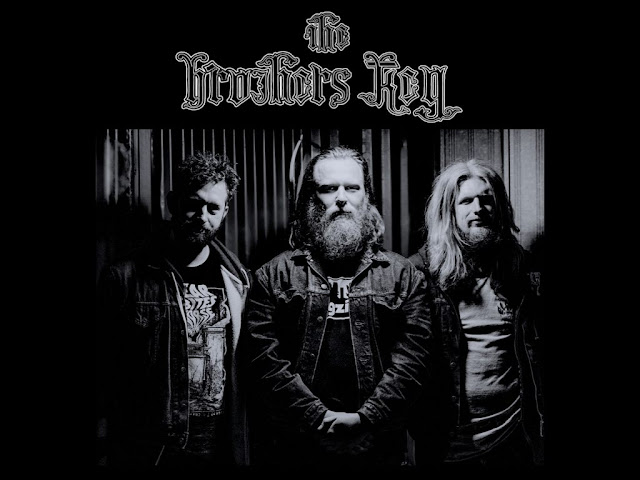 I hope there are more exciting chapters waiting to be told from The Brothers Keg as this album is brilliant entertainment that thrives on being different and so gloriously OTT compared to other albums, you all need this album in your record collection.
Kudos to APF Records for releasing this album. I’m hoping this gets the Vinyl treatment in the future, as I for one would definitely buy a copy as this is easily one of the best debut albums i've heard in a long time.

#Thanks to Andrew at APF Records for the promo. "Folklore, Myths and Legends Of The Brothers Keg" will be available to buy on CD/Cassette/DD from Sept 11th 2020 via APF Records.
© 2020 Steve Howe
Posted by Desert Psychlist at 11:26