When your favourite football (soccer for those from across the big pond) team loses a game against one of its biggest rivals, when you have had a enough of working for a company that treats you like shit and when you are restricted by a worldwide disease that threatens to scupper all your best laid plans ... well you might feel the need for something to put a smile back on your face. This morning, following a day of misery, Desert Psychlist found our reason to smile again when quite unexpectedly we chanced upon a little doomic jewel from the continent of South America, an album of dank dark grooviness, fronted by well executed vocals, with a cool retro/occult vibe. The album in question is called "Pier Della Vigna" and the band performing this little dark gem are Sofia Nasar (vocals); Cassiano Biaggio (drums); Arthur Leal (guitar) and Matheus Gusthavo (bass), a collective of musicians working under the name of  Doomslang. 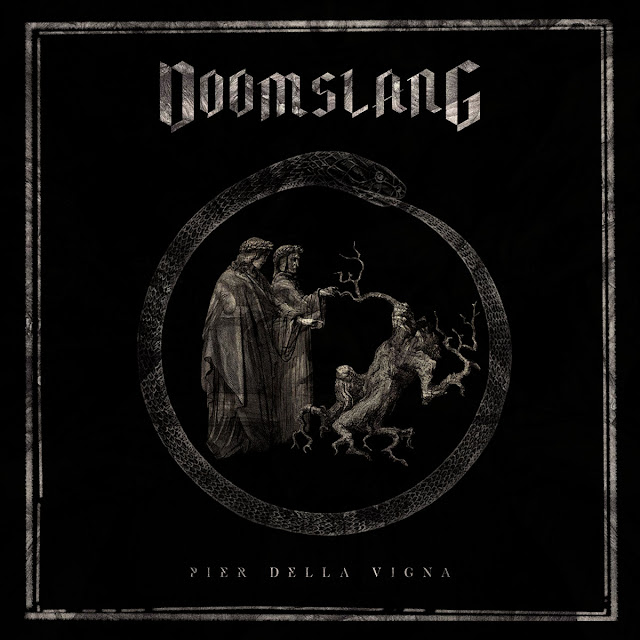 If you are a fan of such occult/doom luminaries as Blood Ceremony, The Devil's Blood and Witch Mountain then you can't fail to be impressed by Doomslang's brand of doomic attack, the bands music possessing a very much similar mix of muscular doom and melodic hard rock to those bands mentioned. Much like Witch Mountain Doomslang are heavy but not in the sense of say a YOB or a Monolord, Doomslang's heaviness comes more from the atmospherics they create within their music than the volume they play at or how low they tune their strings. Having said this there is plenty of bluster and growl to be found in Doomslang's grooves it just that they don't try to bludgeon you to death with them. Doomslang have songs too, there is no stringing a few rhyming couplets around relentless riffage to be found here, songs like opener "Pier Della Vigna/Burning Light" and the prophetic "Vision of the Death" are cleverly structured, both musically and lyrically, to keep the listeners interest from start to finish. It does help the bands cause that their grooves are fronted by a singer whose voice, although not the powerfullest, is nonetheless strong, distinctive and pleasing to the ear. Nasar's vocals are pitched to perfection throughout the EP's four sonic offerings, her voice cuts through the superbly crafted grooves Biaggio, Leal and Gusthavo lay all around her without her once having to go overboard into diva like histrionics, her slightly untamed tones an effective foil against the barrages of proto flavoured doom they spearhead. It has to be said that there is a certain rawness and naivety to Doomslang's debut EP but it also has to be said that it is this rawness and naivety that is also its greatest asset. 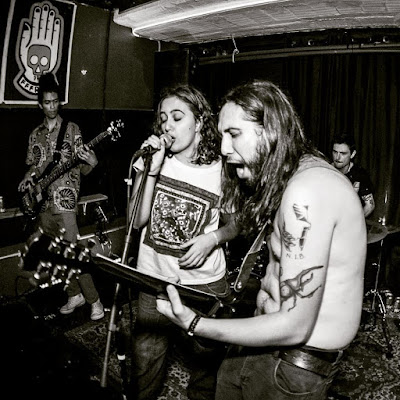 If occult flavoured doom is your particular thing then Doomslang are the next band you should take a gamble on, they may not yet have the polish of Blood Ceremony or the satanic credibility of The Devil's Blood but if "Pier Della Vigna" is anything to go by then who knows what the future might offer.
Check 'em out ....
© 2020 Frazer Jones
Posted by Desert Psychlist at 04:16