To describe Mothraship's sonic assault we need to paraphrase Star trek's Bones and say "this is prog Jim but not as we know it", Mothraship are Beau Callies (vocals/guitars); Michael Gonzales (drums), Matt Bugielski (guitars/vocals) and Sam 'Rahldg' Wizer (bass) from Denver Colorado and bring to the table grooves that are complex and intricate yet at the same time are unashamedly feral and wild, a sound that is hard to describe but easy to fall in love with. Take a listen to their latest release "Smother Earth" to see/hear what we mean by that last statement. 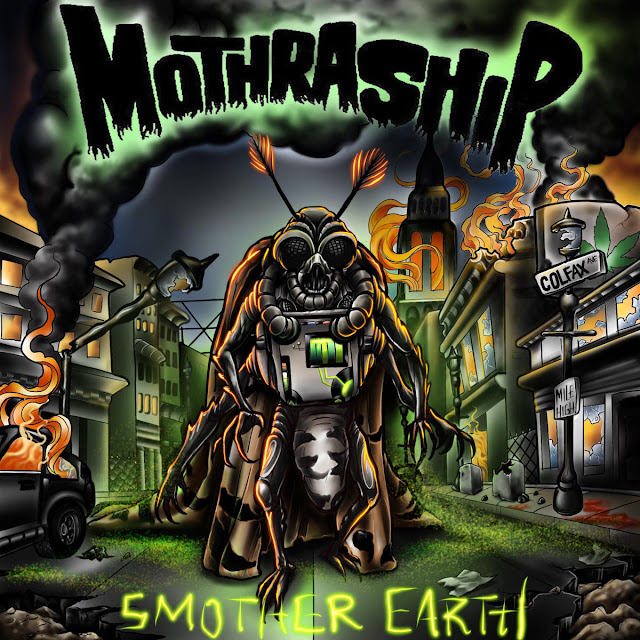 A shuddering drone effect followed by ringing arpeggios introduces "My Own Kind (Intro to My Dead Horse)", the song, an introduction in itself for its following track, is filled with little twists and turns, the band shifting up and down through the gears on a song made especially memorable thanks to its hazy vocal melody and recurring guitar motif. As promised "My Dead Horse" follows and expands on the musical themes of its predecessor while at the same time throwing a little grungy vocal dynamics into the mix resulting in, to Desert Psychlist's riff worn ears, an intriguing blend of Tool like angular intensity and Alice In Chains like emotional gravitas. "Cannonball" rolls in next and here we find Mothraship exploring more jazzier territories with slurred vocals expertly crooned over a backdrop of sharded guitar chords, accompanied by deep rumbling bass and sympathetic percussion."Lycabthrope" follows and boasts a chugging garage rock groove matched with sneering almost new wave/punk like vocals, Mothraship however are not a band to stay put in one place for too long and as the song approaches its final quarter things start to get a little bluesy and doomic the band heading off on enthralling musical tangents before bringing things full circle to take the song to its close. A Celtic tinted circular guitar refrain announces " Walmartyr" around which swirling swooping solos are majestically wended and weaved driven by an exceptional tour de force of percussive might and grumbling, thunderous bassitude. The song slowly builds in both volume and intensity, with the vocals reverting from the garage like sneer of the previous track back to the slightly grungy vocal dynamics of the albums first three songs, before suddenly exploding into a wonderous instrumental finale that blends elements of proggish metal with those of cosmic, out there heavy psych, the song taking off  in a hundred directions all at once yet somehow managing to still sound totally focused and on point at all times, breathtaking! 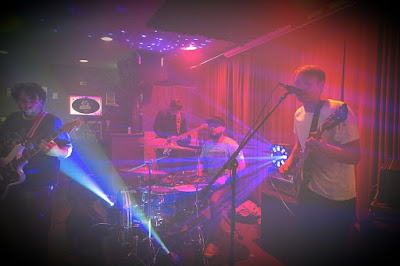 Mothraship made a lot of friends with their debut self titled release "Mothraship" but even those already familiar with the Denver quartets previous work will be surprised and amazed when they hear "Smother Earth", a superb release that deserves to be mentioned on everyone's end of year "best of" lists, it'll definitely be on ours.
Check it out ….