In alternative universe somewhere there is church, inside that church a black carpet leads the way, between pews decorated in black leather and purple velvet, to an altar table where a battered Gibson SG lies surrounded by worn down guitar picks and four silver crucifix's. On a nearby wooden bannister surrounding a bat winged shaped font is hung a well worn buckskin jacket with tasseled strips decorating its back and dangling from its sleeves. In one corner of the churches apse broken drumsticks lie atop a small heap of charred facial hair while in the opposite corner, propped against another bannister, a Fender Precision bass guitar stands with dog eared manuscripts scattered beneath it with words like wizard, void and children scrawled across them in spidery handwriting. This is the Church of the Black Sabbath where acolytes come to worship the almighty riff.

Ok there is no such place but if there was (and there should be) then as sure as eggs are eggs Pennsylvanian trio Morganthus would be jostling for a seat in those leather and velvet pews, bowing and nodding their heads in reverent unison to the sounds of Birmingham's finest echoing around the rafters. I guess what Desert Psychlist is trying to say here is that if you are a fan of Ozzy and co's proto-doomic swagger and dark hard rock bluster then your going to fucking love what Colby N. (bass); Dustin Ganoe (drums) and Doug Miller (guitars/vocals) bring to the table with their latest album "Mortal". 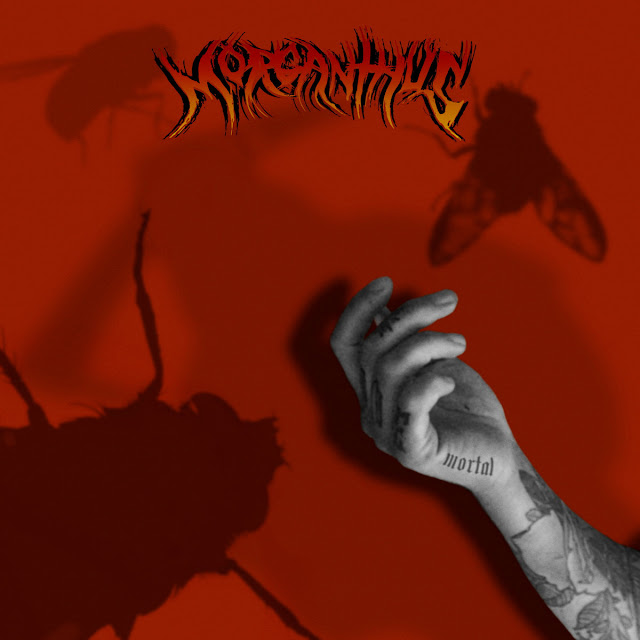 Like Sheavy, Orchid, Rare Breed, and to some extent The Sword and Freedom Hawk, Morganthus are not going to get away without terms like "sabbathian" and "sabbathesque" being hurled in their direction, in fact only a couple of days after the release of "Mortal" those Sabbath comparisons have been appearing all over the comments/reviews section of the albums Bandcamp page (ours included). To the bands credit this does not to seem to have phased them at all, stating via the same page that they are just jamming "vintage style metal for the like minded".
"Plague Bell" is probably the least "sabbathian" song on "Mortal"and starts with a weathered voice, accompanied by a ringing bell, calling "bring out your dead" before exploding into a dark doomic groove that probably owes more to Egypt than it does Black  Sabbath. Miller's vocals here, and on the rest of the album, do posses similarities to Birmingham's bat biting ambassador but only in that they have a similar whining nasal quality in fact the more you hear them the less Ozzy-ish they seem to get.
"Super Science" starts the Sabbath warning bells ringing despite the fact that the main riff is built around a WAH pedal drenched riff (not something Iommi was famed for), it is the songs vocal melody that gives the song its sabbathesque feel, not so much in tone but in how the melody swings
"Phosphorous" follows and begins with Colby  N. tearing a Geezer Butler shaped bass solo from his fretboard (not too dissimilar to that which introduces Black Sabbath's "N.I.B"). before being joined by Ganoe's solid and on point drums and Miller's fuzz drenched guitar in an engrossing proto-doom groove that utilises subtle prog shading to enhance its appeal
Title track "Mortal" drops all its sabbathian pretence and goes for the throat with some truly heavy metallic doom attack with distortion its main weapon of mass destruction.
"Devil's Due" finds Morganthus falling back into line with a song that chugs along at a nice healthy pace while at the same time throwing in clever attention catching little hooks before then finally bowing out on a monnolithic stoner doom groove with the singer telling tales of the "devil", "peddling his white roses and snake oil"
"Mosquitos" closese "Mortal" with a song that mixes old school metal with elements of doom and its proto flavoured cousin while at the same time managing to sound fresh and of the now. 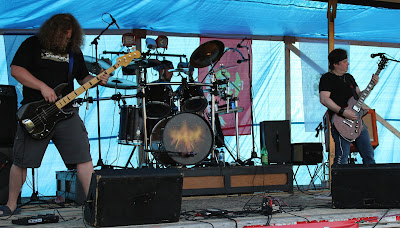 "Mortal" is an album that is undeniably Sabbath influenced and has a strong sabbathian feel however it is just a "feel", if you listen harder and dig deeper you start to discover that Morganthus are a band with their own sound and their own identity, a band who although may bear sonic similarities to a certain iconic band are in fact not that band, nor want to be.
Check 'em out ...