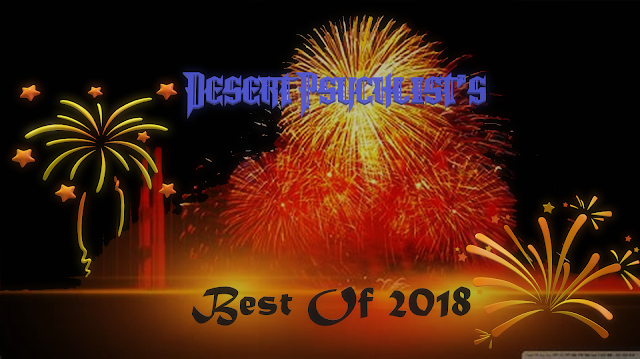 Well the underground rock scene has once again provided those of us who worship at its gnarly altar yet another bumper crop of stonerized grooves, doomic delights and lysergic laments. The following list of 30 is compiled from Desert Psychlist's favourites of 2018, yours may differ but at the end of the day its all rock'n'roll!
Some eagle eyed readers will notice that some of Desert Psychlist's choices were actually released in 2017, these choices qualify due to them being released after Desert Psychlist's self imposed deadline for last years "Best Of" 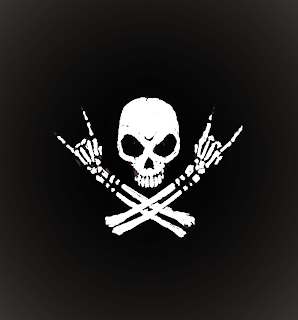 Grajo have been slowly chipping away at that glass ceiling looming over them for a few years now, trying to reach a wider audience and break their music onto a more international market, "Slowgod II" just might be the album to do that..

Stunningly beautiful at times, rocking and raucous at others "Hope?" is an album that delivers on its title, giving "hope" to those that believe good, well played intelligent music will always rise to the top and be noticed not only for its technical prowess but also for its emotional impact.

If doom is your thing but you sometimes feel the need to escape from the more cloying elements of intensity and darkness, the genre is known for, then you can't go far wrong by giving Alms "Act One" a spin, Desert Psychlist guarantees you won't be disappointed.

#27: GREEN LUNG ~ FREE THE WITCH
"Free The Witch" sees Green Lung considerably upping their game and adding to their armoury a deeper, fuller dynamic, If the bands demo "Green Man Rising" whetted your appetites for their brand of classy, fuzz drenched intelligent occult rock then "Free The Witch" is gonna blow you taste buds to smithereens

.#26: THAL ~ REACH FOR THE DRAGON'S EYE
All in all THAL have, with "Reach For The Dragon's Eye", created an album that had it been released before the New Year would most certainly have made Desert Psychlist's best of list for 2017, an album that will only not make our best of list for 2018 if 30 better albums are released in this coming year and that my friends is going to be a very tall order!

#25: HAUNT ~ HAUNT
Who remembers nights hiding behind a cushion watching old Italian horror movies? Ok if you watch them now they are not so scary and even pretty laughable but back in their day they were guaranteed to give you sleepless nights and have you jumping at every creak and groan of your old wooden floorboards. Haunt, a trio from Central Illinois, with influences that range from The Beatles to Voivoid, rehash those days of wide eyed panic and bedclothes pulled up high to the neck with their self recorded, self produced debut release "Haunt" a stunning mix of 60's style vocal harmonies and retro flavoured horror inspired hard/classic rock and metal,

#24 : DESERT STORM ~ SENTINELS
"Sentinels" follows on pretty much where Desert Storm's last album "Omniscient" left off except this time around the band have slightly shifted their focus towards a more complex and progressive attack, still as intense and bludgeoning as before but with subtle shades thrown in to add relief and contrast.

#23: LA IGLESIA ATOMICA ~ GRAN MURO DE COMO
"Gran Muro de Coma" is an astonishing album put together by a band who have, like the space craft in this album, travelled a long, long way to get where they are today. So was it worth all the heartbreak and tears, breakups and reformations that La Iglesia Atomica have been through in their twenty year life span? Well on the evidence of this album the answer to that has to be a resounding YES!

#22: RED SUN ATACAMA ~ LICANCABUR
French men playing South American themed grooves with a sound born from the deserts of North America that will be enjoyed by people from all over the world!

#21: THE GREAT ELECTRIC QUEST ~ CHAPTER II - OF EARTH
"Chapter II - Of Earth" is an album that shows a band moving in the right direction, maturing in both writing and arrangement yet maintaining their sense of fun by not getting overly complicated and intense, a band still preparing for the end of the world by ordering another round of drinks

#20: THE AGE OF TRUTH ~ THRESHOLD
In an age of sex scandals, fake news and games of political smoke and mirrors its nice to come across music that still has an element of honesty and integrity about it. Ironic then, given these days when we can no longer rely on the media for those elements, the music in question comes from a band going by the name of The Age of Truth.

#19: HAAN ~ BY THE GRACE OF BLOOD AND GUTS
"New York, New York so good they named it twice" go the words of the song, well if that's the case the collective of Chuck Berrett (vocals), Jordan Melkin (guitar), Dave Maffei (bass/percussion) and Chris Enriquez (drums/percussion ) should maybe of called themselves HAAN, HAAN!

#18: BURN RITUAL ~ BLOOD OF THE RAVEN
Burn Ritual's ability to create mesmerising, hypnotic songs that worm their way into the deepest recesses of your psyche is one that works to great effect throughout "Blood of the Raven", the band jamming trippy, trance like heavy psychedelic dirges that capture, captivate and enchant in equal measure


#17: SUNDRIFTER ~ VISITATIONS
Kyuss shaped rockets flying at speed over a bedrock of insistent grainy groove and hitting their marks with an unerring level of consistency

#16: INDICA BLUES ~ HYMNS FOR A DYING REALM
Indica Blues, with "Hymns For A Dying Realm", have taken traditional doom back into territories the genre was heading towards, before the stoners, droners and black metallers hijacked it and diverted it down new paths, and have done so by not blinkering themselves to those other forms and styles but by amalgamating some, but not all, of those forms into their own sound, creating a sort of hybrid that has is roots in the traditional but it's head in the clouds.

#15: RIVERS OF GORE ~ RIVERS OF GORE
Only three songs but "River of Gore" will take you on an uncompromising, unswerving and unapologetic journey through the darker recesses of a world that we all try to deny is there but all have to deal with on a day to day basis.


"Juggernaut" is possibly Dollar Llama's best album to date combining as it does an undercurrent of gnarly southern strut flecked with elements of raucous stoner/sludge riffage and bluesy hard rock swagger. Add in to this equation the fact that these guys can not only lay down all the grizzled and gnarly refrains you could ever possibly desire but are also not averse to filling their songs with such occasionally outdated notions as swing and melody.


#13: CRYPT TRIP ~ ROOTSTOCK
Some bands celebrate their bluesy influences others prefer to deny them and some bands like Crypt Trip take them and use them as a launchpad into newer waters, twisting the blues around and around like an old flannel wringing out their essence to add to a melting pot full of other essences to create something new and exciting that although rooted to the past is not defined by it. "Rootstock" is an album born from that melting pot.

#12: FORMING THE VOID ~ RIFT
Massive sounding doomic grooves shaded in psychedelic hues and coated in a sheen of metallic prog intricacy make "Rift" not only one of the most anticipated albums of the year but also one of the most enjoyable.

#11: DRUID ~ THE SEVEN SCROLLS
Imagine taking some of the finest musicians from the psychedelic/prog crossover days of the sixties and seventies and placing them in a modern studio, with all its bells and whistles at their disposal, and telling them to make an album, the results, just might, arrive somewhere close to the sound Druid have achieved with their latest album "The Seven Scrolls"

#10: BRIMSTONE COVEN ~ WHAT WAS AND WHAT SHALL BE


Muscle and melody delivered in equal measure, no one does it better than these guys.


#09: WITCH MOUNTAIN ~ WITCH MOUNTAIN
The fact that the band have simply called their new opus "Witch Mountain" speaks volumes and tells us in two words that this is the beginning of a new chapter in Witch Mountain's story, it is the band's way of saying let's not forget our history and what previous members contributed to that history but let's start anew, this is our fresh start, our "ground zero"

#07: MISSISSIPPI BONES ~ RADIO FREE CONSPIRACY THEORY
A damn fine rock record based around a brilliantly funny and thought provoking concept that combines both story and music in a unique and highly enjoyable way.

#06: THE NECROMANCERS ~ OF BLOOD AND WINE


The Necromancers not only repeat the success of last year's album Servant of the Salem Girl" they surpass it.

#05: HOLY GROVE ~ HOLY GROVE II
Some things in life are worth waiting for especially when those things turn out to be as spine tingling wonderful and as essential as "Holy Grove II"!

#04: A STORM OF LIGHT ~ ANTHROSCENE
A Storm of Light tell us of an end coming, not one led by a horned fallen angel but one led by those wearing Armani and Prada, those in shopping mall fashions and those in charity shop hand me downs, in other words all of us, blind to the fact we leading our very own parade to oblivion and extinction.

#03: HOREHOUND ~ HOLOCENE
Doom comes in many flavours these days from the gothic tinted traditional/epic through stonerized and occult all the way to the extreme and blackened but there are not many bands that touch base with all them...until now

#01: MERLIN ~ THE WIZARD
Desert Psychlist was privy to snatches of "The Wizard" before its release however those snatches in no way prepared us for the full picture that Merlin unveiled with the finished article. Brilliantly written and arranged with a sound and groove unlike anything they have done before Merlin's "The Wizard" is a genuine mini-masterpiece.

Well that's it folks thirty albums that over the course of one year Desert Psychlist has been compelled to return to again and again, of course there are many more great albums we could have added to this list but we had to put some sort of limit on things or you would be reading this until next December. It was a great year for the underground scene with many of the big hitters releasing killer albums as well as many new bands seemingly appearing from nowhere with new and exciting grooves, long may this continue.
Thanks to everyone who has supported Desert Psychlist over the last year, the labels, the PR firms, the bands/artists, everyone at The Doom Charts, fellow writers and bloggers and family and friends, Desert Psychlist wishes you all a ROCKING Xmas and a DOOM New Year! 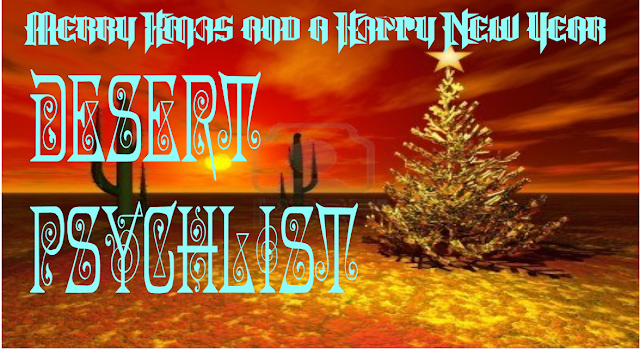 Posted by Desert Psychlist at 14:01