Doom comes in many flavours these days from the gothic tinted traditional/epic through stonerized  and occult all the way to the extreme and blackened but there are not many bands that touch base with all them...until now.
Pennsylvannia's Horehound are that rare animal, a band who can comfortably flitter in and out of  doom's sub-genres and niches without losing sense of their own groove and sound, a band who understand doom and all its essences and who are unafraid to explore them all. Not convinced this is possible, well give their latest release "Holocene"(Doom Stew Records) a spin and find out for yourselves. 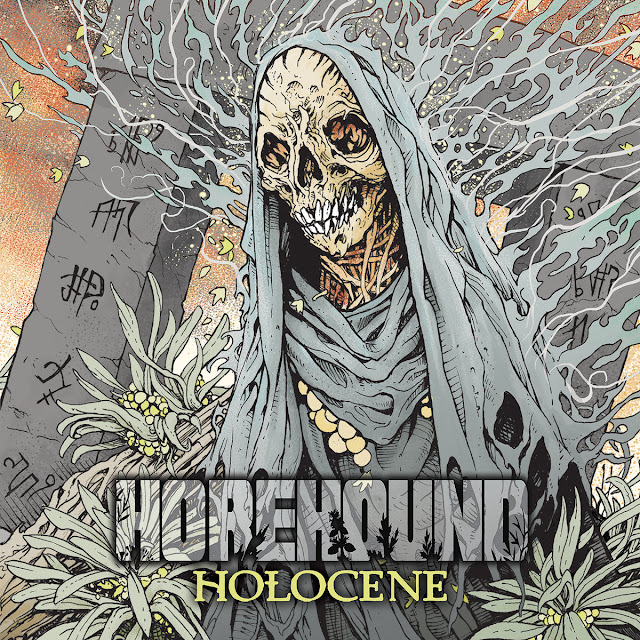 The big doom build up we alluded to in this reviews intro is slightly negated by the gentle acoustic guitar picking that introduces first track "The Kind" but it is not long before the gentle plucking of nylon strings, jazzy percussive chops and organic sounding bass lines are replaced by a wall of crunching chords, growling bottom end and thunderous drumming. Huge sounding and with a groove deeper than an ocean trench "The Kind" is further enhanced by the strong and distinctive tones of vocalist Shy Kennedy her voice, especially in the songs chorus with its call and response vocal hook, the glistening cherry sitting atop a dark dank soufflé of doomic delight. "Dier's Delight" follows and finds the band blending their heavy doomic attack with alt-rock/grunge asthetics and post-rock colourings while "L'appel du Vide" toys with aspects of occult rock and winds them, courtesy of Brendan Parrish's excellent guitar work, around eastern motifs before suddenly taking off into blackened territory with Kennedy swapping her ethereal voicings for a more guttural, demonic tones. JD Dauer's powerful slow and deliberate percussion combines perfectly with Nick Kopco's thrumming, grizzled bass to lay the foundations for nest track "The Sloth" a song that finds Kennedy pitching her vocals a little lower and darker and in doing so ramps up the songs epic/traditional doom feel. "Anastatica" stays within the epic/traditional territory of the previous track but has a slightly deeper emotive feel, something reflected in what feels like a deeply personal  lyric. "Highball" closes out "Holocene" in a sublime sea of atmospheric stoner doom with Kennedy reverting back to ethereal to give her best vocal performance of the album. 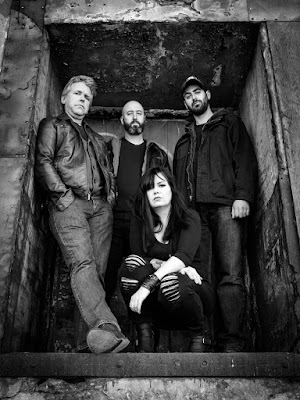 Desert Psychlist could go on for ever on why you should check out "Holocene" and its amalgam of doomic delights but instead we will steal this little snippet from Horehound's Facebook bio  … Fans have described Horehound as, “fucking heavy, doomy, catchy, and downright amazing.”... says it all really.
Check 'em out ….

Posted by Desert Psychlist at 13:59