When Alunah vocalist/guitarist Sophie Day announced she was quitting the band she had helped found and fronted for four albums to say it came as a bit of a shock would be an understatement. For a while fans wondered if it could be all over for the UK doom band but thankfully the remaining members, David Day (guitar), Daniel Burchmore (bass) and Jake Mason (drums), vowed to carry on and recruited into their ranks the visually striking and powerfully voiced Siân Greenaway to fill the hole left by Day. The band soon began writing new material to compliment the new dynamic Greenaway's arrival brought to the table the results of which can be heard on the bands latest release "Amber & Gold" 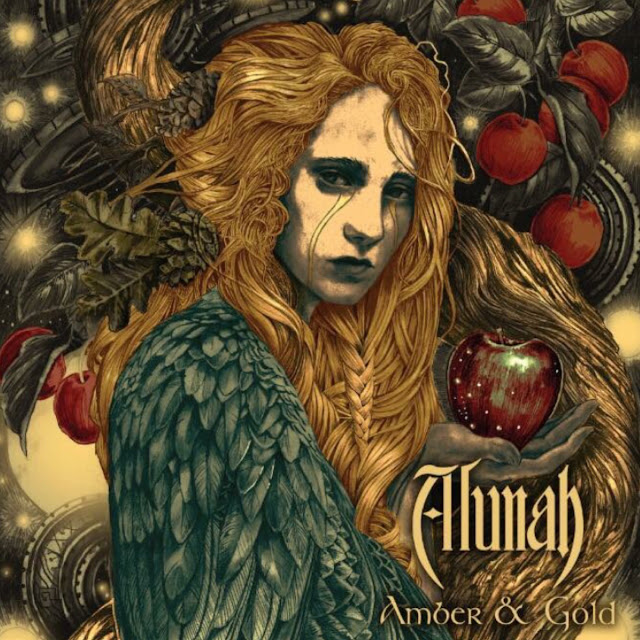 The transition undergone by Alunah in shifting from one vocalist to another seems, from the outside,  an almost seamless one, previous vocalist Day and new singer Greenaway both come from the ethereal school of doomic vocalising and both have a crystal clear clarity to their voices bu where Day had a slightly lighter, folkier tone Greenaway's is darker, stronger and wider in range. Musically Alunah are more or less the same animal with David Day crunching out massive reverberating doomic riffs over Daniel Burchmore's booming bass lines and Jake Mason's huge solid percussion, however the addition of a new singer seems to have brought out a new sense of purpose within the band, they sound fresher, bigger and heavier. First track "Mångata" teases the listener by relegating newbie Greenaway to a more supporting role the singer wailing mournfully over an atmospheric backdrop of low.slow and heavily psychedelic doomic groove decorated with an equally mournful guitar solo. Title track "Amber & Gold" follows and for the first time we get the full force of Greenaway's vocal chops her smooth dark tones swooping and soaring over the songs throbbing dark refrains and thunderous rhythms, her voice pitched deep and dark on the verses, powerful and melodic on the chorus'. "Awn" sees the band tinting their heavy doomic attack with subtle bluesy colourings and little twists of Celtic flavouring with Greenaway telling of souls being crushed and bones being broken, her sultry tones making even mutilation sound beautiful and something to look forward to. The band throw the listener a curveball to finish proceedings in the shape of a cover, Chris Issaks "Wicked Game" a great song in its own right, is taken by Alunah to a whole new different level and sees the band giving the song a doomic makeover its familiar melody given a glossy coating of moody edginess and doomy elegance. 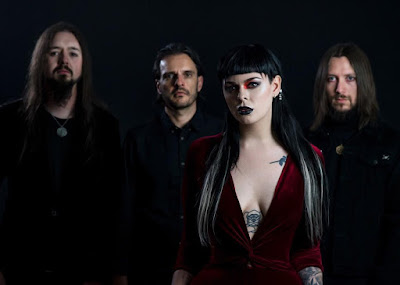 "Amber & Gold" heralds a new chapter in Alunah's ongoing story and fans will be pleased to hear it is a chapter not too radically different from previous chapters, just a little darker and a little more intense, reason enough to...
Check it out ….