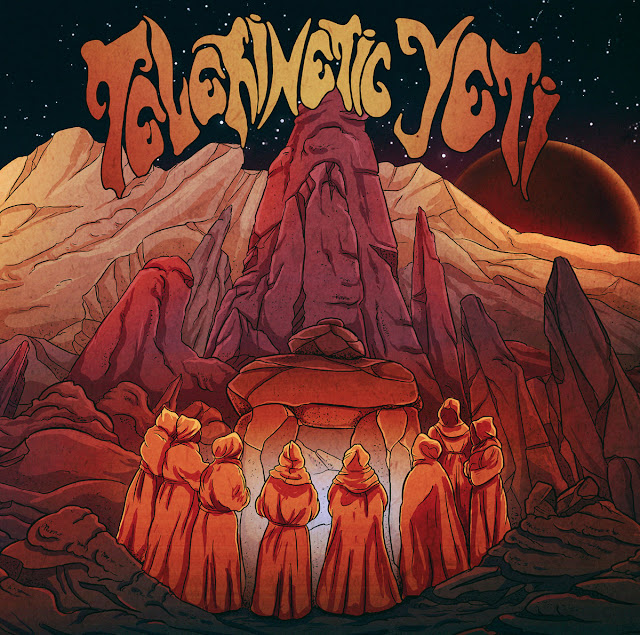 First and title track "Abominable" begins with droning feedback before erupting into a fractured,stuttering guitar refrain supported by Anthony Dreyer's almost tribal  percussive accompaniment over which Alex Baumann's gruff bear-like vocals are roared, the songs chugging riffage broken intermittently by Iommi-esque fills and solo's, the resulting sonic attack almost belying the fact that this is being played a duo!
"Electronaut", an instrumental,  opens with Dreyer laying down a solid and tight percussive beat before Baumann comes in with a low crunching guitar motif interspersed with clever little fills and licks. The groove takes a dramatic turn about of a quarter of the way in with Baumann chopping out some fuzz drenched powerchords completely unaccompanied before Dreyer returns and the groove moves into more Sabbath-esque territory that sees the guitarist tearing some very tasty notes from his fretboard before the pair move the groove back into the songs initial refrain and take things to the close.
"Stoned and Feathered" has a more desert/stoner feel than the previous songs, it's fuzz drenched groove leaning more closer to likes of Mos Generator and Fu Manchu than the heavy Sabbath -like vibes of what has gone before. Baumann however does not compromise his vocals to reflect this slightly lighter approach, roaring his vocals with intensity and power as if he was standing in front of a five piece death metal band instead of the one man sitting on the drum stool beside him.
"Colossus",another instrumental, begins light and airy with a Celtic tinged guitar motif played over intricate and sympathetic percussion before suddenly taking a left turn and moving into heavier areas with Dreyer's tumultuous sticksmanship the foundation for a furious Baumann riff, the song then continuing to swing back and forth between these two dynamics before fading into silence.
"Lightbearer" finds Telekinetic Yeti jamming a heavy sludge groove driven by Dreyer's pounding drums and furnished by Baumann's gnarly riffage and bellowing vocal tones but as is what seems to be bands modus operandi it's not long before they change tact and finish the song on a swathe of swirling spacey guitar effects.
"Apophis" has the duo jamming a brief but delicious slow, heavily distorted, low tuned instrumental sludge/doom groove replete with pulverising percussion and gnarly riffage. Short, sharp and soaked in swampy sludge its a shame that its almost over before its started.
"Beneath The Black Sun" sees Telekinetic Yeti bringing a little psychedelic colouring into play weaving lysergic textures around slow deliberate sludge metal riffage, but as before the band cannot resist the urge to mix it up a little, sticking a thrash like passage into the songs mid section and finishing in a wash of gentle ambiance for the finale.
"Himalayan Hymn" closes the album, its hazy almost pastoral beginnings of gently sweeped arpeggios over shimmering percussion soon making way for a maelstrom of heavy stoner metal groove superbly driven by Dreyer's whirlwind drumming and enhanced by Baumann's gnarly low and heavy fretwork.
Two guys, sounding like more, making a hell of a racket with just six strings and some skins, you just got to check it out .....

Posted by Desert Psychlist at 05:06