Psychedelic rock. acid rock and psych are terms we often use for when rock music steps outside the boundaries of the conventional and enters into the realms of experimentation. The beginnings of this form of rock music can be traced back to the late 60's when bands like the Jefferson Airplane, Grateful Dead and Quicksilver Messenger Service moved away from the restraints of the three minute pop song and started adding elements of colour and texture into their music, often taking off into flights of fancy with extended jams that could go off on a tangent into unexplored areas. it was an era of freedom and expression and this new music reflected that freedom.
The advent of hard rock in the mid to late 70's somewhat curtailed psychedelia's march although aspects of it could still be found within the music of the progressive bands albeit with a slightly more complex and classical edge. The 80's saw psychedelia rear it's head once again this time within the realms of electronic music but it was the 90's that saw the genre start to get a foothold in the rock world again. The stoner and doom bands that emerged out of  the USA desert scene started to merge 60's psychedelic/acid vibes into their hard edged riff heavy grooves and in doing so created a whole new genre that we among the underground scene now call PSYCH! 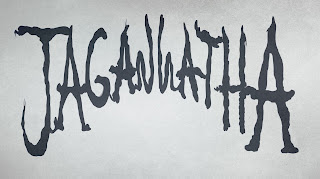 Jagannatha are, it could be argued, direct descendants of those 90's bands who re-took psychedelia in the name of rock. The quartet from Grenoble, France blend together an eclectic mix of stoner grit and prog complexity with lo-fi doom and groovy psych and serve it all with high levels of skill and musical excellence all of which can be found on the bands self-titled debut. 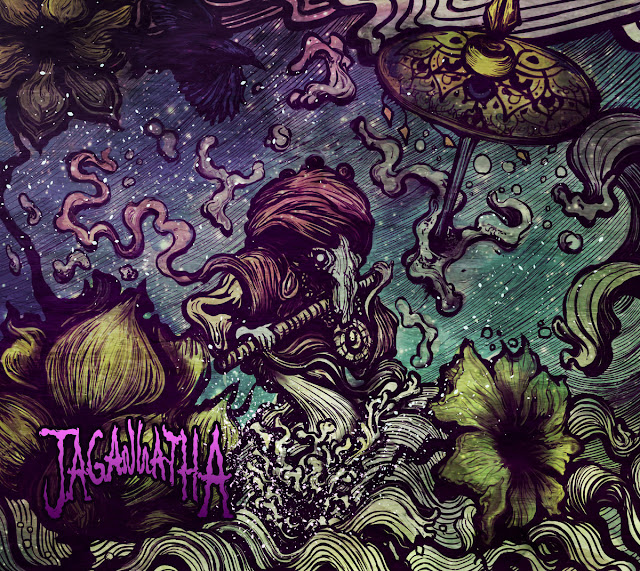 First track " Krishna" opens up like a chrysalis slowly metamorphasizing  into a butterfly, light percussion and gentle arpeggios making way for ripped fuzz fuelled riffage and heavy rhythmic thunder before then falling back again. This ebbing and flowing of dynamics is then surrounded by Eastern influenced guitar motifs, complex percussion,swirling solos and massive throbbing bass lines., the whole thing building layer by layer until ending in a heavy psychedelic crescendo.
"Uchchaihshravas"  builds it's groove around a deliciously seductive bass line over which shards of guitar colouring are thrown in an almost random but perfectly placed order and are supported from beneath by precise and intricate drumming. At around the five minute mark things take a dark turn and this beautiful tranquillity is shattered as the band explode into a fuzz heavy riff. The band spend the next nine minutes plus using this riff as a base camp from which to go off in various directions of musical exploration, exiting on exotic flights of fancy then returning for a while before taking off into the stratosphere once again, it's breathtaking.
"Airavata" dispenses with gentle beginnings and instead goes straight for the throat with a deliciously dark low-fi doom riff. From this initial riff the song slowly climbs through a series of dynamic layers, building the tempo and intensity with each layer and filling these layers with swirling guitar solos, licks and motifs, furiously intense drumming and percussion and thrumming, bone shaking bass. It's heavy, spine tingling and totally brilliant.
After the whirlwind of the previous track the listener might feel in need of some respite and Jagannatha provide it briefly with the beautiful and quite compelling intro into final track "Kalki"  it's light fusion groove enhanced by jazzy chord progressions and arpeggios from the two guitars and complimented by funky drums and bass. This respite does not last though and its not long before the fuzz returns and we are back in heavy doom/psych territory but again this is only a temporary thing and the music shifts once more moving up a gear into a more stoner-ish metal groove. It would be enough for many listeners if the band stopped there but no this band wants you to take you to the edge of the cliff  and beyond and do so with a stunning lysergic final section that sees shimmering guitars soar over angular, jagged rhythms. Seventeen minutes, seven seconds of instrumental heaven. 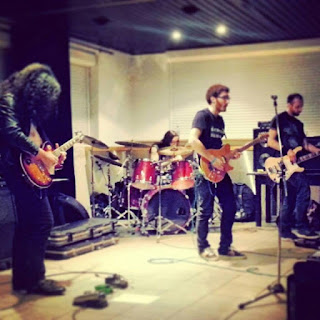 I was desperately trying to avoid the word "journey" while reviewing this album but to describe this release without using that word has nigh on proved impossible mainly because this band and this album DO take you on a journey. The band create sonic voyages that propel the listener through worlds of colour, texture and mood that are at times heavy, brutal and tight and at others light, delicate and loose with the two extremes winding themselves around each other to create a whole that is, at all times, just mesmerizing.

Posted by Desert Psychlist at 06:32