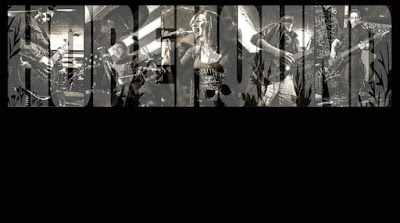 Sometimes it can be hard, when writing a review, to tag a band with a genre description without said band sending an irate e-mail screaming for your head because you have tagged them wrongly. It gets even more difficult when the "underground" scene that you write about is currently going through a period of cross-pollination where bands are constantly crossing back and forth, cherry picking elements from other musical genres and utilising them within their own sonic palettes. Thankfully Pittsburgh's Horehound have saved me from all this controversy by tagging themselves, both on Bandcamp and their Twitter and Facebook pages, as "Stoner Doom"......thanks guys! 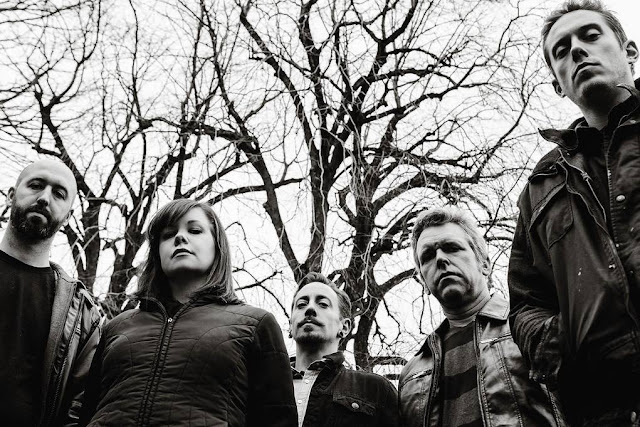 Horehound as previously mentioned are from Pittsburgh and are a quintet made up of Shy Kennedy - vocals, , JD Daur - drums, Brendan Parrish - lead guitar, David Westfall - bass and Mike Altopiedi -  rhythm guitar. The band, only formed last year (2015), have already caught the attention of the movers and shakers of the underground scene's podcasters, bloggers and journalists and now plan to expand that attention to a wider audience with their self-titled release on Blackseed Records "Horehound". 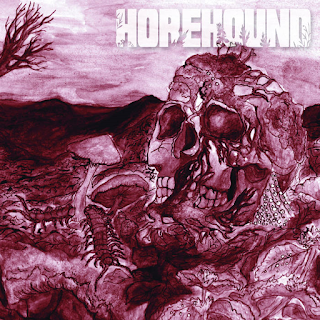 First track "World To Come" immediately grabs the attention with Parrish and Altopiedi's gnarly doom drenched, two guitar intro. Westfall and Daur then join and the song drops into a deliciously dark and seductive mid tempo groove. Entering stage centre the vocals of Shy Kennedy arrive, her powerful voice finding itself a niche somewhere between (ex)Witch Mountain's Uta Plotkin and Holy Grove's Andrea Vidal. A tad more ethereal than the former and a little less bluesy than the latter she weaves her voice over and around a backdrop of heavy crushing riffage and pounding rhythms interspersed with touches of tasteful lead work as if she was born with a microphone in her hand.
"Sangreal" is up next and sees the band hitting a furious stoner/occult groove albeit with a darker doomier edge. Kennedy's voice sits slightly lower in the mix here allowing the insistent riff, laid down by Altopiedi, Parrish and Westfall, to be pushed to the fore. Parrish adds to this little licks and motifs that catch the ear and pull the listener further in. Special mention should also go to JD Daur his drum and percussion work is everywhere on this track.
"Crowns and Thorns" starts with Daur's cymbals crashing before exploding into a mighty circular refrain. Pounding drums and throbbing bass lines go toe to toe with chainsaw riffage and wah pedal drenched guitar solos. Once again Kennedy's vocals are laid back in the mix but this time soaked in reverb giving her voice an otherworldly, ghostly feel.
"The Dead Don't Lie" finds Horehound exploring the darker side of their sound, a bruising riff revolving around a heavily phased Kennedy vocal. Altopiedi's brutally distorted guitar and Westfall's booming bass lay down a swirling refrain that Parrish then embellishes with an array of guitar pedalled effects. The last quarter of the song sees the riffs tempo gradually increase until imploding in on itself and closing on a droning sustained single note.
"Waters Of Lethe" shifts the dynamic away from the doom/stoner grooves of previous tracks by dipping its toes into the waters of post-grunge and alt.rock. Chainsaw riffage and heavy rhythms thunder and roll beneath a stunning vocal melody that to this reviewers ears recalls  90's Scottish/American alt.rockers Garbage.
"Myope" follows much in the same vein as the last track except this time around the band mix it up with a little stoner dirt and sludgey grime.
"Waking Time" brings the album to a close and finishes the album on a high. Westfall's throbbing,distorted bass intro heralds in a titanic doom drenched rumbling riff over which Kennedy's clean vocals are answered by Altopiedi's sludgey growl. Meanwhile Daur pounds out a thunderous backdrop of hard metallic percussion while Parrish adds little touches of six-string colouring in, over and around the massive sonic wall being constructed around him. It's a huge sounding finale to an album that deserves all the plaudits that are bound to be soon heaped upon it.

Posted by Desert Psychlist at 14:58