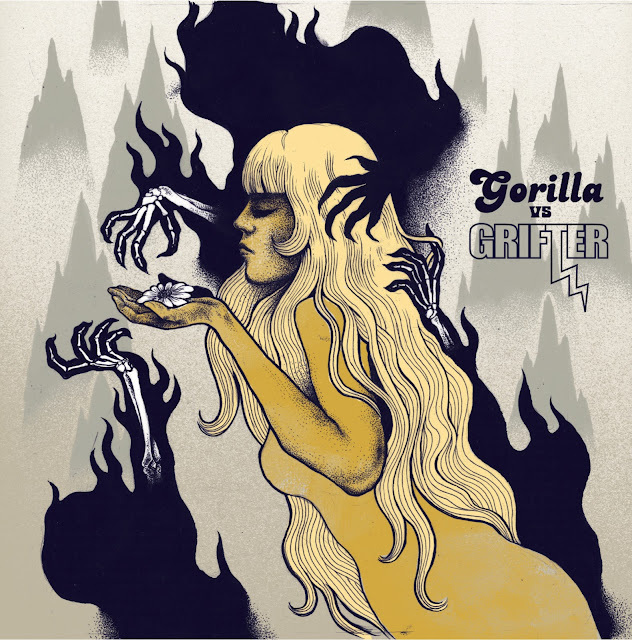 Gorilla vs Grifter is a split album, featuring two of the UK's hardest working stoner/hard rock bands, released on HeviSike Records The album, mastered by Mos Generator's Tony Reed, sees both bands contributing four songs each, going head to head in fuzz-off to see who can be the gnarliest, dirtiest rock'n'roll band in Britain.

Gorilla get to go first and state their case with four songs of the greasiest, grimiest fuzz'n'roll your ever likely to hear outside of a Motorhead gig. "Both Barrells" channels the spirit of the late Lemmy's band by grooving on an " Ace of Spades" type riff that would be sure to make the big man smile ."Slay Rider" fuses gritty blues and fuzzy stoner in a glorious hybrid of the two and boasts an incendiary guitar solo."Grind Yer Down" again goes down the Motorhead route but this time the guys mix it up with little touches of lysergic psych. Gorilla finish of their section of the split with "Three Squeeler" a balls to the wall, take no prisoners rocker that is bound to become a mosh pit favourite when it is played live. All four tunes are coated with raw, throaty vocals and played with such force and power that you could well be fooled into thinking this was a live concert recording

Grifter are up next and mount their challenge with "Falling Asleep" a high tempo, fuzz drenched ripper that boasts a catchy chorus and addictive, crunchy riff. "Paige Turner" struts its stuff with a series of stuttering heavy riffs that are part 70's hard rock and part 90's desert grooviness."Hi Wasted" starts off pure rock'n'roll then detours into the blues with some tasty harp playing before returning to its root to take it to its close. "Me Love" closes both the album and Grifters contribution to it with a gritty stoner/desert workout that sees the three members firing on all cylinders in a delicious blend of gritty vocals, distortion drenched bass and guitar and tight powerful drumming.

The title to this superb split is Gorilla vs Grifter so it could be assumed that this is a competition and that a winner should be chosen. Well in my humble opinion there can only be one winner here ...........
the listener!

Posted by Desert Psychlist at 12:41