Chris Cappiello (bass), Kevin Flynn (drums), Ed Grabianowski (vocals) and Richard Root (guitar) are Spacelord a four piece force of nature hailing from Buffalo, New York who describe themselves as "four beings of pure cosmic energy who came to Earth and chose, out of all the possibilities, to take the forms of four dudes with shitty beards". Now in the beards Desert Psychlist cannot comment on but that "cosmic energy" is something that can certainly be felt running right through each of the eight songs that make up the bands third release and second full length album "Indecipher" 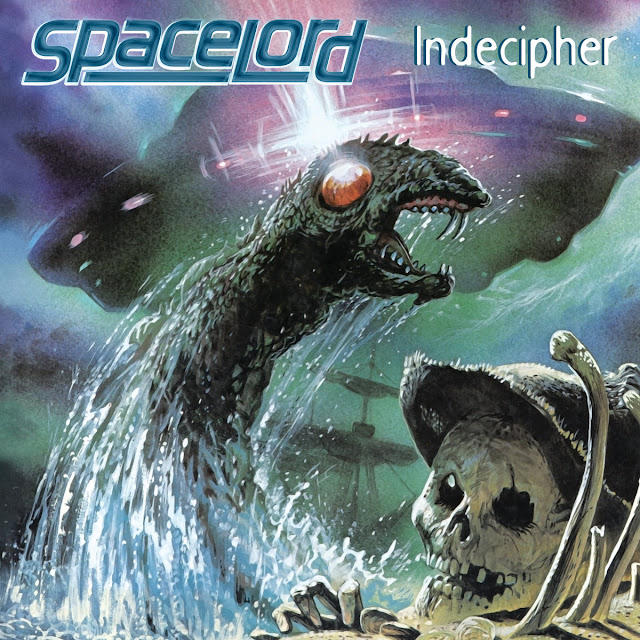 A deliciously booming bass line surrounded by screaming feedback heralds the arrival of "Indecipher's" first track "For The Loved Ones" then the drums kick in and the vocals enter and its lift off to both a song and an album that references classic/hard rock as much as it does it's more weed blasted hard rocking stoner cousin. Space themed songs fill "Indecipher" from start to finish, however the sound Spacelord create is sonically closer to the hard rock of Montrose's "Space Station #5" than it is to the "Space Is Deep" meanderings of those cosmonauts of space-rock Hawkwind. The band utilise everything from the blues through to desert rock to fill out their grooves and boast a vocalist in Grabianowski who could easily hold his own with not only the aforementioned Montrose's Sammy Hagar but also those with names like Plant, Rodgers and Dio! The rest of the band are no slouches either with Root crunching out gritty hard rock chords, Zeppelin-esque bluesy voicings and earth scorching solo's, while underneath Cappiello and Flynn keep things solid and steady with growling deep bass and pounding Bonham-esque drumming, the whole coming together to deliver one quality song after another.

Top notch grooves from beginning to end without even a whiff of filler, "Indecipher" is Spacelord's best release to date and promises much for the future.
Check it out ….

Posted by Desert Psychlist at 09:50