Restless Spirit hail from New York and consist of Paul Aloisio (guitar/vocals); Jon Gusman (drums) and Marc Morello (bass), the trio have gone through a number of personnel changes as well as a couple of name changes (Witchtripper and Death Metal Pope) before arriving at their current line up and present band name. The band have just released their second full length album "Blood of the Old Gods" (Lifesblood Records) under the moniker of Restless Spirit and its a game changer on every level. 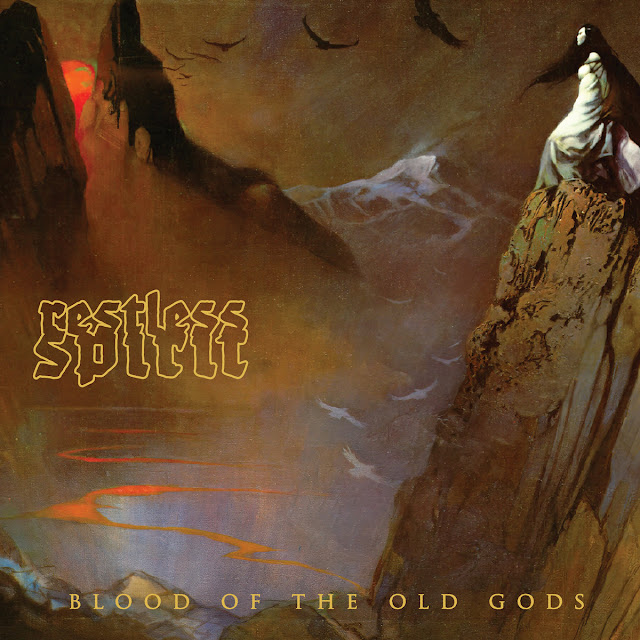 First things first let's give a big shout out to Evan Perino at Shellshock Audio for the recording and Azimuth for the mastering of this release, the production is immense and the clarity is off the scale good. No production values, however, are going to save your ass if the grooves you are presenting with that production are lacking that same level of quality, thankfully the quality of the production on "Blood of the Old Gods" is matched by the quality of the music it showcases.
"Blood of the Old Gods" is a "concept" album themed around the non-acceptance of the status quo and the pitfalls and consequences of having to follow the "safe path", whether this works lyrically and musically in this albums overall context we will leave for you to decide but for the purposes of this review we will concentrate on the songs as separate entities.
"The Betrayer" opens proceedings with clean acoustic guitars gently picked over a backdrop of slowly increasing grainy FX which then gradually fades to make way for the explosion of groove that is the albums next track "Judgement and Exile" finds Restless Spirit blending into their usual forceful mix of sludge doom and prog elements of old school hard rock and heavy metal, ear catching guitar hooks and motifs abound here and give the song a pleasing catchiness not often associated with music of this genre, especially when that catchiness is combined with a vocal that is as clean, powerful and as melodic as this one is. "Crooked Timber of Humanity" , is a metallic tour-de-force packed to the rafters with full on vocals, crunching guitar refrains, growling bass lines and thunderous drumming yet despite all of its bombastic bluster there is an underlying proggishness to be found in its arrangements, beneath those bruising riffs and rhythms there are subtle complexities at play that may not be immediately evident on a first listen but soon make their presence felt after a couple of spins. After the sonic onslaught of the two previous tracks you might need a moment to catch your breath and "The Reclaimer" provides that with a very brief but interesting foray into experimental territory. The hammer goes down again with "Cascade Immolator" a song that kind of reminded Desert Psychlist of early era The Sword but with a little more complexity, a little less Sabbath worship and a lot stronger vocal. Title track "Blood of the Old Gods" is a piece of pure ass-kicking heavy stoner metal heaven that boasts a superbly catchy vocal melody as well as virtuoso performances from each and every member of the band before, quite unexpectedly, throwing an acoustic curveball into the mix to take things to the close. The band round things off with "Haunted" an enthralling finale that finds the band fully embracing the more proggier aspects of their sound while at the same time still maintaining their grip on the heavy, squealing pinched harmonics, ringing arpeggios, brutal fuzz drenched bass riffs and a mix of pounding and intricate rhythms, as well as the occasional lapses into ambience all feature here and thus bring to a close what we guess, despite its mid-December release, will be a shoe in for many peoples 2021 "best of" lists. 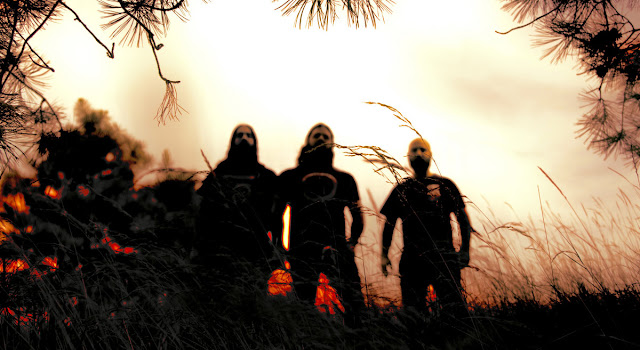 With "Blood of the Old Gods" Restless Spirit have found their sound, gone are the rougher growlier vocals that graced sections of their previous work, the sludgier aspects of their music are still in place but have been tempered with with a little more restraint and finesse and there seems to be a much bigger emphasis on melody, something that works well both for the band and the listener alike.
Check it out ....
© 2021 Frazer Jones
Posted by Desert Psychlist at 08:40