Music that is a little off-kilter, quirky and off the wall is something that has always interested Desert Psychlist, we like grooves that tend to go a little off-piste and wander into unexpected territories so imagine our delight when we were presented with  an album from Plastic Woods, a Spanish trio, whose new album "Dragonfruit" (Discos Macarras) ticks all those boxes and many, many more. 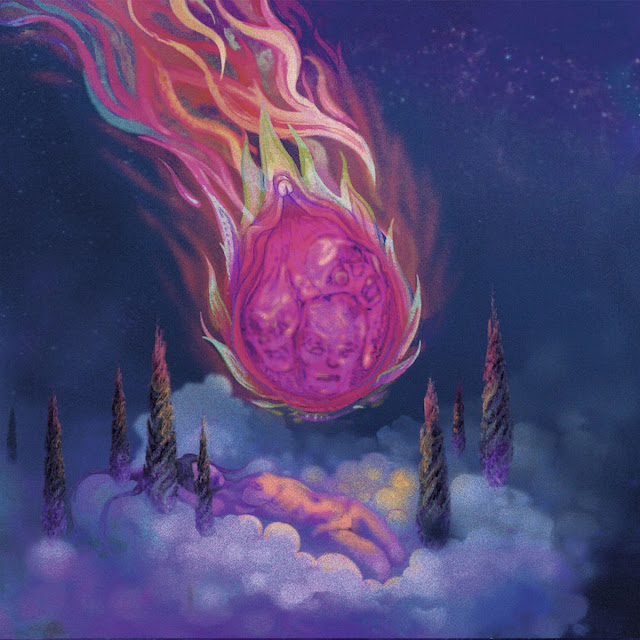 Plastic Woods are Javier Rubio Arrabal ( drums,/percussion); Antonio Pérez Muriel (bass guitar/multiple arrangements) and Jesús de la Torre Sánchez (guitars/vocals/transverse flute), these three are the core musicians and brains behind Plastic Woods but music this left of field, complex and convoluted needs a little help to achieve its full potential and so for "Dragonfruit" the band recruited in Antonio Campos del Pino (Flamenco guitar, palmas, jaleos); Irene Veredas (violin); Miguel Ángel Robles Urquiza (trumpet); Carlos Mesa García (sax) and Isaac Pascual Godoy (piano, synth), the contributions of these musicians adding textures and colours to the bands songs that take them out of the ordinary and into the extraordinary.
Title track "Dragonfruit" opens up proceedings and is a song so angular and sharp you could probably cut yourself on it, the songs proggish attack reminded Desert Psychlist of "Relayer" period Yes in places but with a much heavier overall dynamic, a dynamic that on its journey encompasses elements of not only prog but also fusions of  jazz, psych and hard rock all blended together beneath a vocal that on occasions strays into System of a Down territories. "The Calling" eases things down a notch or two and finds the band blending the traditional music of their Spanish homeland with grooves that have filtered across from more western sources, this fusion of eastern and western dynamics delivered beneath a beautifully executed and pitch perfect vocal. The eclectic "Dreamland" follows and has the feel of something that might have not quite made the cut of  a big budget musical while "Storm" takes its lead from Americana and British folk music, its luscious violins and gently picked acoustic guitars giving it a soothing feeling of gentleness and melancholy. For their next song "Close to the Void" Plastic Woods go in  completely the opposite direction by mixing up punkish aggression with a little quirky QOTSA type desert rock with the vocalist adopting an equally aggressive vocal meter to add an extra element of bite to the proceedings. For final song, "Sulayr", Plastic Woods throw all their respective eggs in one basket, the prog-like complexities of  title track "Dragonfruit", the traditional Moorish elements of  "The Calling", and the Broadway show vibe of "Dreamland"  are all combined in a diverse and delightful amalgamation of musical styles that creates a groove very, very different from what we may be used to hearing in this scene and one that quite frankly tears up the rule book. 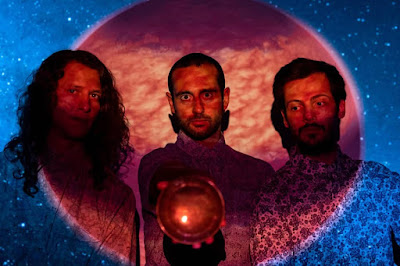 Some might read terms like Americana, Moorish, Broadway and folk and run screaming to the safety of their doom, sludge and stoner collections but if those same people dug a little deeper they would, on "Dragonfruit", find all the heaviness they could possibly hope to hear but garnished and blended with elements drawn from a much wider musical spectrum than they might ordinarily be used to,
Check it out......
© 2021 Frazer Jones
Posted by Desert Psychlist at 11:17