There seems to be a new sub-genre in town and it is one that appears to be predominantly Italian and the name of this sub-genre emanates not from the bands playing the music but from those listening to it. The word many are using to describe this music is "scuzzy" a word fans are using to describe a sound that is drenched in filthy fuzz and distortion, tinted with lysergic elements and sporting vocals that often sound like they've been phoned in rather than laid down in a studio. First of these bands to attract Desert Psychlist's attention were the spaced out Sonic Demon then trailing not far behind came the doomic Black Spell and now, as if to complete some sort of "scuzzy" triumvirate, Demonio, the subject of this review,  have arrived with their scuzzy garage rock meets heavy psych meets fuzzed out doom opus "Electric Voodoo". 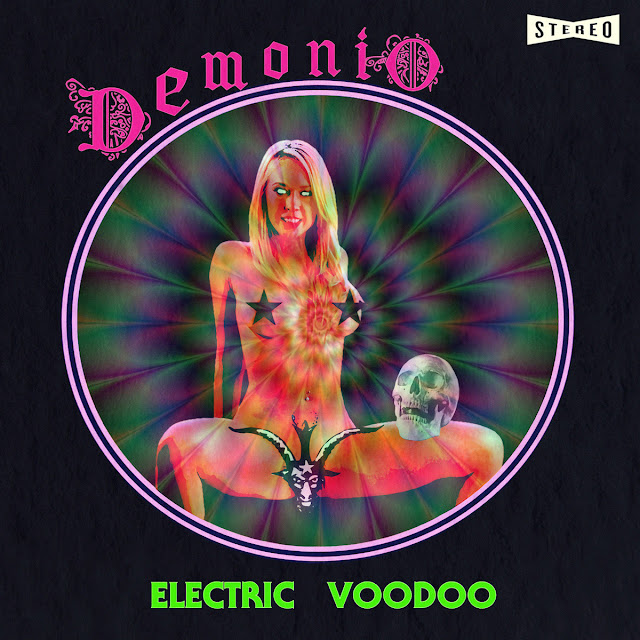 We at Desert Psychlist have a sneaking suspicion that Demonio, Sonic Demon and Black Spell may all be the work of the same small band of musicians, all three bands are Italian, all three utilise a mixture of filthy fuzzed out doom, gnarly stoner/hard rock and trippy heavy psych to fill out their grooves and all three grace their respective social media pages with poster artwork borrowed from 60/70's horror and porn movies, of course we cannot prove a connection but these similarities have definitely got our spider senses tingling. Demonio are probably the more "garage" sounding of the three bands with the grooves the band explore on their album "Electric Voodoo" having a slightly more raw and feral dynamic. Throughout the albums eight songs, which include such doomic titles as "Lust for the Dark", "Mistress of Death" and "Satan's Eyes", heavily distorted bass and guitar tones constantly teeter on the edge of breaking up into just noise but are tempered by occasional left turns into more lysergic waters where crunching fuzz laden power-chords make way for liquid sounding arpeggios and thunderous drumming is replaced by shimmering percussion. Vocals on each song are delivered clean yet gritty and are placed deep in the mix, a trick that gives them a distant almost remote feel yet at the same time adds a sinister edge to the bands grooves and  ramps up their "scuzziness" to an altogether other level. 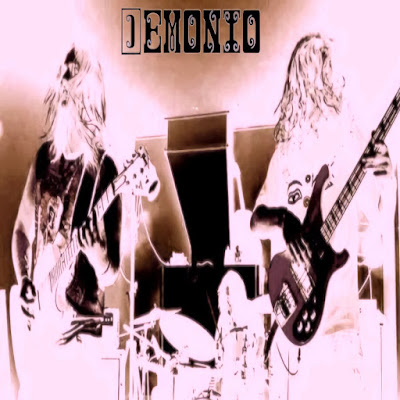 The dictionary's definition of "scuzzy" is something that is filthy or dirty and given the fuzzy filthiness and distorted dirtiness of Demonio's raw and uncompromising sonic attack on "Electric Voodoo" we think a better description would be hard to find, All hail the SCUZZ!
Check 'em out ....
© 2021 Frazer Jones
Posted by Desert Psychlist at 10:29