Riffs or to give them their proper name "refrains" are probably the most important element of any rock song worth its weight in salt, a band can have all the complex arrangements and twiddly guitar solos it is possible to have but it is almost always the "riff" that grabs your attention. Australian metallists Lucifungus, DD ( guitar/bass/vocals) and B-Rad (drums/vocals), understand the importance of a good crunching riff and the bands latest release "CLONES", much like their previous albums, is jam packed full of 'em! 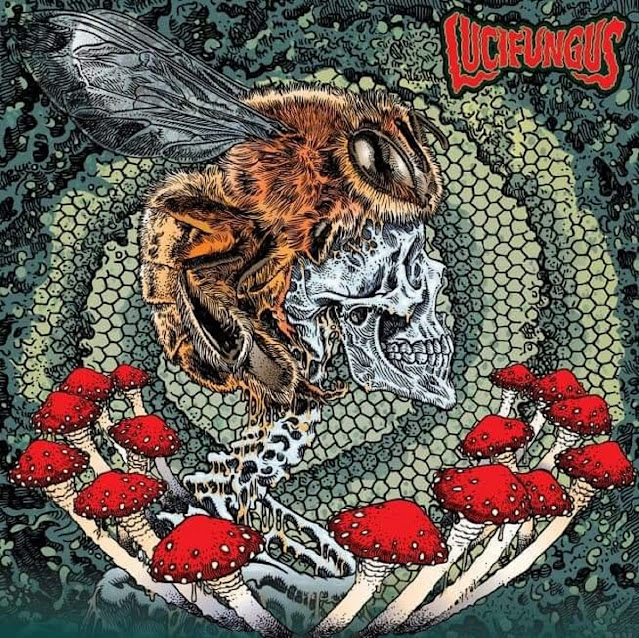 There is a touch of tongue in cheek humour to much of what Lucifungus bring to the table and this is no more evident than on this albums opener "Greetings" the band saying a brief throaty hello in a series of different languages to a backdrop of chugging stoner metal. Having made their presence felt the band then move into "Night of the Living Derek", a huge sounding riff heavy opus dedicated to those creatures you rarely see but know are always somewhere around, the songs gruff staccato paced vocals telling of "the tribe that lives under your house" who leave "footprints in the flour", of course they could be describing mice, spiders or roaches but they could also be referring to something much more sinister. "Sloth" follows, its massive reverberating guitar riffs and thunderous drum patterns are decorated in gritty vocal harmonies that celebrate doing the bare minimum to the maximum effect. "Worldshaker" boasts a growlier, grittier vocal to those that  have passed on this albums previous songs and is backed by a groove that has a slightly skewered and blackened dynamic. Next track "The Dawn Patrol" goes for a more straight ahead stoner metal groove over which cleaner dual harmonies are executed. "Call of the Cracticus" begins its life with with gentle ringing arpeggios then explodes into a gnarly assed instrumental that sadly is a touch repetitive and screams out for a searing guitar solo to take it into the stratosphere while "99% Wolf" finds Lucifungus playing to their strengths by reintroducing those staccato paced harmonies they played with on "Night of the Living Derek" and combining them with an equally juddering musical dynamic that also features intermittent squealing guitar motifs. "S.F.M." is a stoner metal riff fest served up behind a vocal that resembles something you might expect to hear coming from one of those Viking metal bands like Manowar or Amon Amarth only lyrically this isn't an ode to Norse gods instead it is more an instruction sheet for the correct use of a bong! Final song "Respect Your Elders" closes proceedings with 46 seconds of riff 'n' groove over which the songs only lyric, "Choke on this", is roared in gruff sludgy tones. 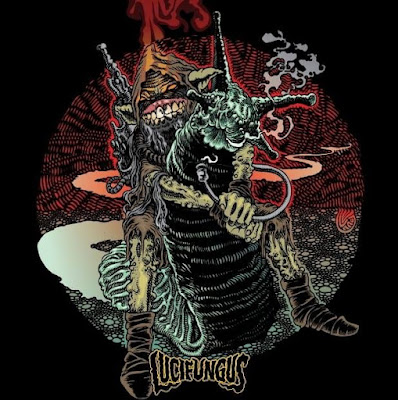 Heavy, but not brutal, stoner metal/doom with a wry sense of humour running through its lyrical content is what Lucifungus deliver with "CLONES", a highly enjoyable romp that ticks all the right boxes musically and will leave you feeling just that little bit better about yourself and the world you live in.
Check it out .....
© 2021 Frazer Jones
Posted by Desert Psychlist at 04:34