Paraguay is a landlocked South American country bordered by Brazil, Bolivia and Argentina so it will not surprise anyone to find there is no such thing as a Paraguayan navy, what may surprise some though is that Paraguay has a burgeoning rock scene. One of the bands from this scene starting to get a little attention outside of their native country is a quartet from Lambare, named Fuzzkrank. 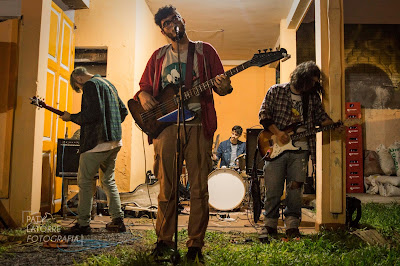 Fuzzkrank, Hugo "Chugo" Lafuente - bass/vocals, Matías "Matt" Aguilera - lead guitar, Javier "Xavi" Sosa - rhythm guitar and José "Merry" Burguez - drums, started out playing Black Sabbath covers as trio originally with Francisco Cabrera on drums (he plays on the EP) but with the addition of Sosa on second guitar the band decided it was time to get serious and began composing their own tunes. In March 2015 the band agreed it was a good idea to get some of these tunes down on tape and so went into the studio and recorded this their self-titled debut EP "Fuzzkrank". 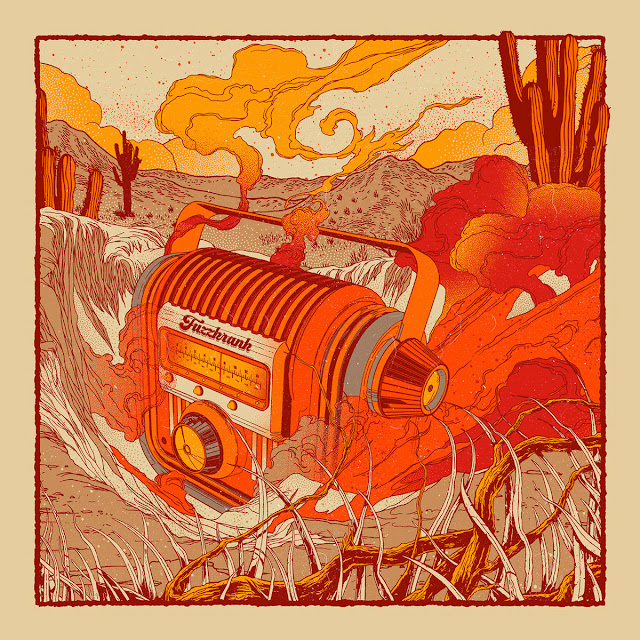 The first thing that hits you, on hearing "Fuzzkrank" is the authenticity of the early 70's groove that these guys achieve throughout the five songs on this EP (four if you dismiss the narrated soundbyte that is "Intergalactic Wave Receptor MKII"). Warmly fuzzed guitars, a big bass sound , solid drumming and strong melodic vocals all combine together to create a sound that recalls the days when prog was not yet a bad word and psych and hard rock had just started dating. This "retro" vibe is mirrored in the production, an "analogue" feel adds to the authenticity and gives the EP a warmth that is often lost in modern recording techniques. The band, unashamedly, borrow  from the past, not only from the big hitters like Zeppelin,Purple and Sabbath, but also from those "cult" bands who never quite made the big stage.  "Deus-Ex Machina" mixes a little prog with early psych  and adds a smattering of hard rock in a song that lyrically questions the existence of a higher being and musically rides a wave started way back by the likes of proto stoners Captain Beyond and Warhorse (70's UK Deep Purple spin off) , the addition of a swirling Hammond organ ( supplied by band friend José Russo ) compounding the "retro" feel even further."Glass of Whiskey" and Fuzzy Feelin' both come from a more classic rock place, the former a bluesy ode to the amber spirit that takes a little Free/Bad Company structure and blends it with touches of southern country rock and the latter a driving up tempo number that carries in its groove a little of the psych/pop once utilised by Randy California's Spirit. The band save the best for last though, "Black Monolith" takes all those seventies influences, so cleverly used in the previous songs, and mixes them with their 00's counterparts resulting in blend of yesterday and today that is exhilaratingly fresh yet comfortably familiar.
Check 'em out...

Posted by Desert Psychlist at 06:45