It has been a bit of a rollercoaster ride for Youngblood Supercult since the 2014 release of their debut album "Season of the Witch", the band lost their original vocalist, then recruited another only to have their bassist jump ship, luckily the new vocalist also played bass and so stepped up to take on both duties. The current line up of Bailey Smith--guitar, Weston Alford--drums and David Merrill--vocals/bass have managed to come through all this turmoil and recently released a follow up to "Season of the Witch" in the shape of "High Plains". 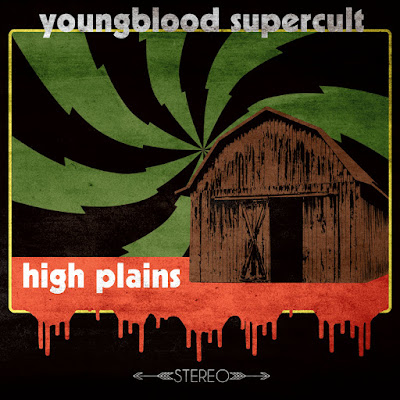 The first thing you will notice when listening to "High Plains" is the different vocal approach David Merrill brings to the table, where original singer Wyatt Desch was more of a traditional hard rock powerhouse, Merrill is more laid back and mellow, still powerful but with a warmer edged , slightly shoegaze tone.  It is no surprise then ,that apart from opening track "Stone Mountain Blues", a hazy psych/blues instrumental, the remaining ten songs seem to have been built to accommodate that voices
Second track "Monolith" begins with a throbbing heavy blues riff that would not have sounded out of place on a Free album, when Merrill's vocals enter his tone is clean ,echoed and slightly mournful, his voice floating sweetly above the, now, hand muted riff beneath him. At just over the halfway mark the dynamic shifts into a heaving classic rock groove that recalls the heavier parts of Mountain's "Nantucket Sleighride", Merril and Alford laying down a hard'n'heavy rhythmic pulse into which Smith injects a smouldering blues drenched solo before rejoining the riff to take the song to its conclusion..
"Nomad" jams a slightly more stoner groove over which Merrill sings about "Ramblin' from town to town" and "Never settling down" against a backdrop of heavy fuzzed guitars and pounding drums. The theme is a bit of an old blues cliche but when given the Youngblood Suprercult treatment sounds fresh, vibrant and contemporary.
"Before The Dawn" begins with  a Merrill bass line and then his lone voice singing the first verse,  Alford then slams the hammer down and Smith joins Merrill in the  riff with Smith throwing in little licks and curls to keep things interesting. The song shifts dynamically between bluesy hard rock and Sabbath -like doom with Merrill mixing it up vocally between clean, mellow and clean, gritty, and pulling both off perfectly.
"Mind Control" is up next with the trio jamming on a riff that borrows heavily from Deep Purple's "Mistreated". whether this is intentional or not the groove created works superbly well and is a superb vehicle for Merrill's vocals. In the songs final quarter the band fall into another Sabbath-esqe groove that sees Alford and Merrill keeping it tight and economical while Smith peels of furious Iommi inspired solo's from her fretboard.
"White Nights" begins with slightly acid folk undertones before exploding into a lysergic mish-mash of heavy riffage and psychedelic madness that is underpinned the whole way through by Alford's exceptionally dexterous and utterly superb percussion work.
"Hell Hath No Fury" kicks off with a circular riff that then drops into a chugging blues/stoner progression behind the verses. Merrill delivers another faultless vocal as well a laying down some gnarly bass, locking in tight with Alford's drums, the pair putting down a jagged, edgy full blooded groove that, in the songs final quarter, allows Smith free reign to rip another burning solo, shredding a myriad of notes from her six strings until the song fades into silence.
"Forefather" spins a tale of disappointment and regret against a backdrop of doomy and atmospheric fuzz drenched blues grooves. Merrill sings of a man " Held under a slave-driver’s thumb, Couldm't muster the strength to run" with a mellow and slightly monotone delivery adding a feeling of weary resignation and detachment to the  songs lyrical storyline.  Mid-song the trio take it into more traditional blues rock country with Smith delivering a stunningly beautiful guitar solo, blues drenched notes dripping from her fingers, channelling the spirits of  heavy blues maestros Clapton, Page and Green through her choice of notes and delivery before the trio return to the songs root for the final quarter.
"Black Hawk" sees the band putting the pedal to the metal with a super-charged bluesy rocker. Alford lays down a mighty wall of percussion over which Smith's guitar and Merrill's bass combine as one to deliver a thunderous hard rock groove that is further enhanced by Merrill's grittier vocal and Smith's tasteful lead work.
"Acid Tongue" maintains the pace and intensity of the previous track but inject a little hazy lysergic funkiness into proceedings. Superb vocals float over a backdrop of choppy riffage and powerhouse percussion punctuated by scintillating guitar solo's all ending with a mighty percussive bang!
"Down 75" closes the album with a wonderfully played but far too short acoustic number, Merrill crooning  of  "empty streets and tumbleweed" as Smith shows she's as adept with an acoustic guitar as she is with the electric version. It's a lovely piece that's part country blues, part Americana and a whole lot beautiful. 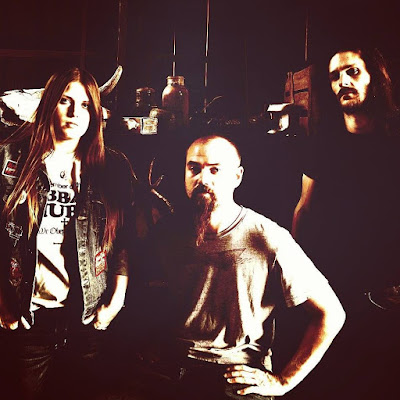 Youngblood Supercult are essentially a blues rock band but to just label them as such would be an injustice. This band have put their own spin on the blues adding to the genre elements of psych, doom, stoner and classic rock  and shaking all these parts up in one big cocktail of musical excellence.
Check them out.

Posted by Desert Psychlist at 12:13