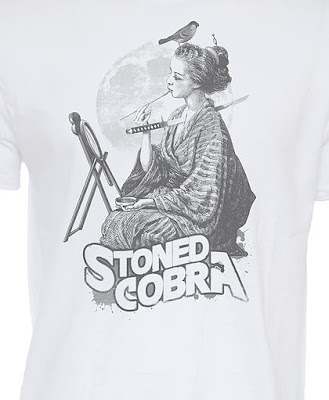 The first time I came across Stoned Cobra was back in 2013 when the band released their debut album "High and Mighty". I was, going by the fact they came from Birmingham, Alabama and that I am English and never been to the USA, expecting to hear some sort of mash up of southern metal and country rock laced with "good ole boy" drawled vocals, I was, however, pleasantly surprised to discover an album full of warmly fuzzed desert grooves blended with touches of shimmering psych and classic metal coated in melodic vocal tones and harmonies.
In  March, this year (2016), the band, Isley: Vocals/Guitar, Krothe: Guitar/Vocals, Wahl: Guitar, Light: Bass and Reed: Drums, reconvened in the studio to lay down tracks for their latest EP "Armed and Hammered". 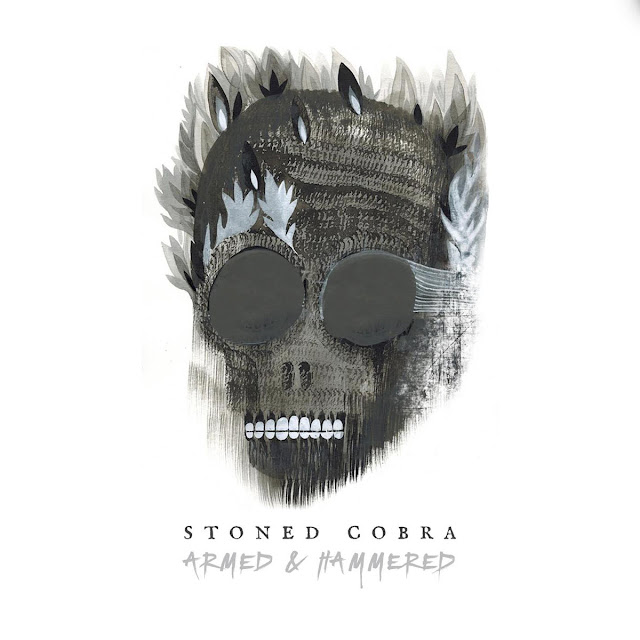 "Armed and Hammered" pretty much picks up from where "High & Mighty" left off in terms of quality and musical content except this time around the band seem to have focused a little more on arrangement and song structure, the songs, on this EP, sounding more rounded and filled out than those that can be found on their debut.
"Caskets" is first up and sets the tone for the rest of the EP with a crunchy stoner/desert riff supported by crashing percussion and throbbing bass lines. Clean, melodic vocals weave themselves over and around these sandy grooves, sitting atop the fuzz drenched riffage like cream on the edge of a razorblade.
"End of Daze" enters on a fuzzed out, heavily distorted riff that is gradually joined by the rest of the band. As with the previous track the groove is essentially stoner/desert, full of delicious hooks and catches and coated with superb vocals, but it is when the song reaches its psych drenched  middle section that Stoned Cobra's three pronged guitar attack really comes into it's own. The three six-stringers weave  differing tones and effects over and around each other evoking from their fretboards  sonic rainbows of colour and texture under which droning distorted bass and intricate drums slowly push the tempo back into the main riff and the vocal. Stunning!
"Dead by Dawn" employs a catchy circular galloping almost nwobhm riff to announce its arrival. A little less desert and a little more metal than what has gone before the track nevertheless retains enough sand in its grooves to please the Kyuss/QOTSA obsessives out there well as those that might enjoy a little Iron Maiden metallic sheen.
"Hightower" throws a little bluesy swagger into the proceedings, a chugging, choppy and ridiculously addictive riff sits beneath the excellently voiced verses then explodes like a volcano between them. While the bass and drums hold down the bottom end the guitars come at you from all angles riffing, soloing, swirling and swooping around the rhythmic thunder below. As the last note fades into silence you can feel the hairs on the back of your neck relax and fall back into place.
"Devil's Due " brings things to a close with a gentle acoustic stroll through the clouds. Beautifully finger picked acoustic guitar is the base over which creamy smooth, fragile vocals, both solo and harmonised, are delivered. Dreamy, delightful and delicious it might not have been everyone's choice for a finale and there could be an argument that it might have benefited better from a mid EP placing but it is nevertheless a wonderful piece that shows that there is more to Stoned Cobra than first meets the eye (or ear).

Posted by Desert Psychlist at 05:48