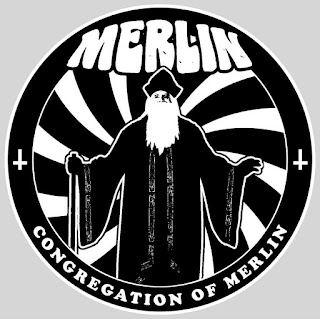 Kansas City, the departure point for Dorothy's trip into the lysergic madness of the Wizard of Oz and the home of  MLS soccer team the Kansas City Wizards, is the home of a band who also have a wizard connection, but this time an English one...
Merlin,  Carter Lewis - Guitars, Backing Vocals, Keys,  Caleb Wyels - Percussions, Jordan Knorr - Vocals and Joey Hamm - Bass, first come to my attention via a recommendation from a friend who insisted I check out their album "Christ Killer". What I heard that day was a mix of everything I loved about the underground rock scene condensed into one conceptual piece. Intense and at times quite chilling its genre skipping grooves heralded the rise of a band who were not going to be defined by tags and labels.
Two years later and with the heavy weight of expectation sitting on their shoulders Merlin finally delivered a follow up to that iconic album with 2016's "Electric Children". 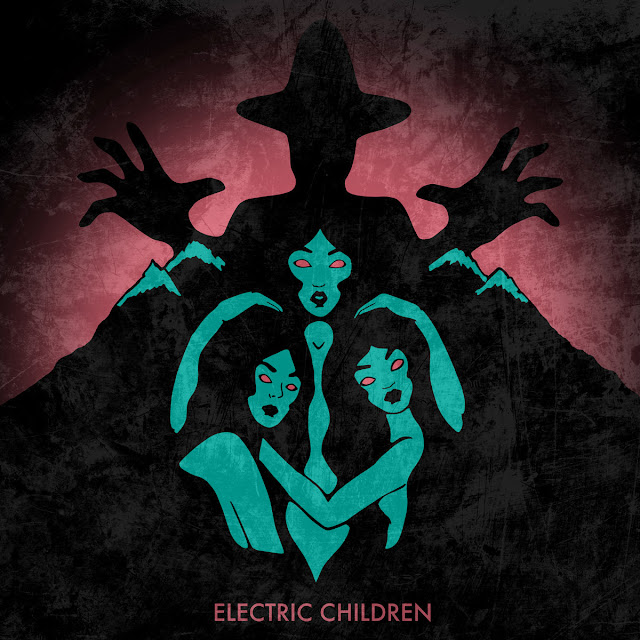 First track "Bad Trip" opens with a thin sounding tinkling bell chiming over a droned effect and a lightly amped guitar riff before exploding into a maelstrom of heavy riffage and throbbing rhythm. Knorr's vocals erupt from this dark barrage telling a tale of being down "among the skulls and worms", his voice clean, powerful and edged with a slightly sneered gothic tone, a tone perfectly suited to the bands horror/ B movie inspired sonic assault . The track stays true to its lysergic theme by finishing in an acid drenched jam full of swirling keys, pedal effected guitar, fluid, thrumming bass lines and earth shaking percussion.  Only 2;58 seconds long it is nevertheless spine-tingling and stunning stuff and its only track one!
Second and title track "Electric Children" lyrically portrays a Village of the Damned/Children of the Corn type nightmare vision with Knorr taking on the role of puppet master/guru singing lines such as "I will show you the truth, I will guide you home" imploring his Electric Children to "hang them on the noose". Around this scenario of parricide/genocide and control the band weave a web of proto-metal and doom grooves that sees Lewis throwing down some seriously impressive lead guitar shapes over a backdrop of solid rhythm work from Hamm and Wyels.
"Will 'o' the Wisp" begins with moody atmospherics then moves slowly into a doomy psych drenched groove that is totally dominated by Hamm's bone shaking bass and Wyles pounding drums. Lewis adds to this whirlwind of sound slabs of chordal colouring and effect laden solo's as well as sharing vocal duties with Knorr.
"Interlude" is exactly that, a brief keyboard piece that nods its head towards film director and soundtrack composer John Carpenter. It also serves as the perfect intro into next track.....
"Night Creep" a song that uses a serial killer as its principal character. The song rolls along on a slightly punk-ish groove embellished with dual vocals and a totally and ridiculously addictive sing-along chorus, it then takes a left turn into a delicious psychedelic wig out with Hamm and Wyels laying down a super charged groove for Lewis to paint psych drenched guitar strokes over.
"War Bringer" blends Sabbath-esque proto metal with elements of its more new wave 80's leather clad cousin against a mixture of clean demonic and punky aggressive vocals. The track moves through a series of differing dynamics all driven by Hamm and Wyels' almost telepathic rhythmic understanding and coated with Lewis's undeniably adept guitar skills.
"A Reprisal for Julia" is another transitional keyboard piece that has more than a whiff of "film noire" about it and leads into the epic conclusion that is....
"Tales of the Wasteland" is made up of three suits "Gunslingers Blues", "Lords of the Wasteland" and "The Dragonaut Returns" the first part is essentially a lament to the disastrous aftermath and consequences of war. Lewis weaves tasteful minor pentatonic blues soaked solo's over and around Knorr's impassioned and weary vocal. His guitar swirls, swoops and soars against Hamm's and Wyels' funereal rhythmic backdrop, bucketful's of emotion and feel dripping from his fretboard. The second part raises the tempo and moves away from the emotional and into the devotional. Lewis, Hamm and Wyels  lay down an eastern themed groove around a chanted mantra embellished with occasional keyboard flourishes and guitar motifs, like a Whirling Dervish it spins around in a glorious controlled frenzy until it can spin no more and slowly subsides to make for way for suite three. The third and final movement finds the band back in acid rock territory with the band blending Floydian psychedelic textures with Sleep- like rhythmic bluster, a direction that that those who are familiar with Pink Floyd's "Nile Song" will absolutely love. The Floydian theme is continued in Knorr's vocal performance, he adopts a  slightly Syd Barrett type tone and delivery that perfectly fits with the  groove the band are striving to create.The song shifts dynamics in the last quarter morphing into an exquisite lysergic jam, Lewis's guitar swirling around a backdrop of droning bass lines, solid pounding drums , sweet flute and jagged keys and finally finishing with the tinkling bell that started us out on this journey.

It's fairly obvious that Merlin take a lot of their influences from the world of cinema especially the horror,sci-fi genres. If I was forced to describe "Electric Children" to someone who has never encountered Merlin before then I would have to say this is the best film your ever likely to HEAR!

Posted by Desert Psychlist at 10:41