British stoner bands are a little too thin on the ground for my liking, yes the UK can boast that we spawned the mighty Orange Goblin but you would be hard pressed to name many others. We do however have a few bubbling just under the radar and here I am thinking of Essex punk stoners Whoremoan and Welsh bong wizards Dope Smoker. A new band to add to that list is London quartet OAK who have just released their self titled debut EP via Bandcamp. 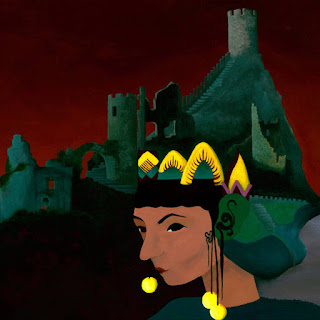 OAK are not a band to break the listener in gently, no this band go for the throat right from the off with opener "All Above". Starting with a guitar feeding back against a wall of droning fuzz, a thick gravelled howl then rips the air, a signal for the rest of the band to join the fray grooving on a mix of raw edged stoner and  funky psych  all coated with raw edged vocals and peppered with incendiary guitar work. It is a perfect opener and sets the stage for the rest of the EP.
Vocals throughout the EP's  four songs are supplied by Andrew Wisbey his voice a mixture of stoner/sludge roar and southern throaty bellow, infusing the lyrics with powerful and distinctive tones. Behind him the boiler room of Scott Mason (bass) and Rob Emms (drums) supply a wall of rhythmic pulses and beats, solid and locked in tight, driving the music along in a whirlwind of skins and strings. Guitarist Kevin Germain adds to this an arsenal of riffs and licks his wah drenched solo's soaring above and around the grooves and vocals laid down by his fellow members.
Whether getting down and funky ("Queen of This Land") or laying down some doomy sludge atmospheric blues ("Ride With Me") the band never allow the intensity of their sonic attack to drop below eleven. This intensity is ramped up to twelve on closer "Dissolve" a track that sees the funk and rock of the previous tracks taken to another level with Mason ,Emms and Germain laying down a deliciously addictive groove of riffs, rhythms and bass over which Wisbey growls, roars and croons in his distinctive and delightfully unique style.
I have to admit I did not "get it" when first listening to this EP but something about what I was hearing made me hit the replay button and I listened again and then later again,on my third listen I was hooked!
If like me you don't gell with this straight away, I urge you to give it another go, some things you need to live with a while before you truly appreciate them.

Posted by Desert Psychlist at 06:33