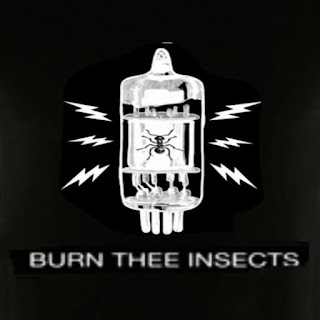 Burn The Insects, a father and son duo from Arizona may have made one of the most diverse albums ever to have graced the desert/stoner scene with their full length release "Droid Intelligence" (released on Twin Earth Records).
The pairing of Mitchell French (bass) and Lucust French (vocals. drums and guitar) have somehow managed to take a mix of desert fuzz and stoner grit and blended it with elements of psych, space,shoegaze and grunge/alt atmospherics that has resulted in a totally unique and exciting sound. 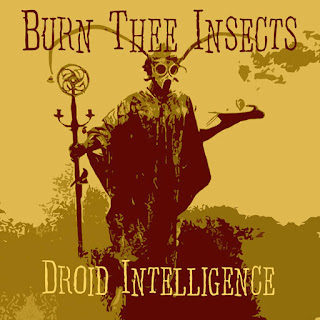 "Hydroponics" kicks off  the album with a fuzz drenched circular guitar riff pushed hard by a frenetic display of drumming and deep pulverising bass work which is then joined by the vocals. Here is where the first surprise comes in, instead of the stoner roar you might be expecting, given the heavy groove being laid down, what you get is quite melodic almost shoegaze/indie in tone. The second surprise is the way these tones fit hand in glove with the wall of fuzz and distortion they sit in front of!
"Concrete Pillow (Pretty Comfortable)" explodes next from the speakers its bass heavy riff circling around and around like a predatory eagle seeking prey. The vocals here take on an almost Alice In Chains feel, the (I assume) double tracking of Lucust French's voice bringing memories of Cantrell and Staley at their finest, giving the tune an almost ethereal feel, a titanic feat given the heaviness of the songs groove.
"A Dinner With Fontaine (Darkest Wheel)" hits the deck running with a Kyuss-like desert groove that then shifts down a gear mid section taking on an almost, but not quite, Colour Haze/Causa Sui vibe only to shift up again to take it to the fade.
The next two tracks "Distorted Seclusion"  and "Through The Fog" slow things down a little but lose none of the intensity of the previous tracks. The former is an infectious groove machine with Mitchell French's bass dominating the proceedings with his heavily distorted riff and the latter being a glorious mix of fuzzy atmospherics and vocal melodies.
"Slow Cooking" once again nods its head towards AIC but adds a little prog-ish complexity to the mix by including a few abrupt time changes to the groove. Its a little disjointed in places but is saved by Lucust French's superb vocal and the quality of the duo's musicianship.
The first thing that came to my mind when first hearing "An Insignificant Planet of Yellow" was fabled, made for tv, 60's beat band The Monkees,  I know its a bit weird but something about the vocal melody and its almost pop sensibilities reminded me of those cheeky moptops, albeit with a lot of fuzzy bass and guitar and a harder rhythms on top.
" A Perscription To Burn" stays in the commercial arena with the band hitting on a stuttering groove over which Lucust French delivers a superb vocal. In a live arena this would be a moshpit favourite!
The album comes to a close with a ripper of a tune in "A Swarm Of Bees" a balls to the wall rock monster that takes off at 100mph and doesn't slow down until the final note. Mitchell French's bass laying a rumbling bedrock for Lucust French to add touches of screaming, buzzing guitar to. Short, sharp and totally addictive it ends "Droid Intelligence" with an almighty bang! 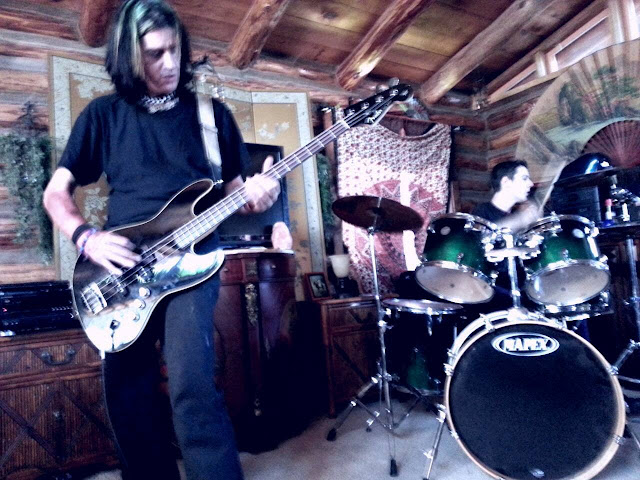 Posted by Desert Psychlist at 08:30