America's West Coast scene was the place to be in the hippy, trippy days of the 60's, kaftans, beads and bell bottomed trousers were the uniform of the day worn by a youth movement revelling in a new found freedom that was further fuelled by freely available hallucinogenic drugs such as LSD, mescaline and psilocin. The 60's also saw a major sea change in popular music with bands like Jefferson Airplane, The Grateful Dead, Moby Grape and The Electric Prunes all experimenting with sound, exploring new ground, mirroring those drug fuelled journey's through the windmills of their minds with a music that was devoid of boundaries a music that was full of possibilities.
Denmark's The Sonic Dawn were not around in the 60's and not even from the USA's West Coast but somehow or other these Danish psychonauts have absorbed those 60's ideals of musical freedom and experimentation and tweaked them for a 00's audience resulting in a sound that is informed by the past but targeted for the present, a sound that listeners can experience for themselves on the band's second album "Into The Long Night". 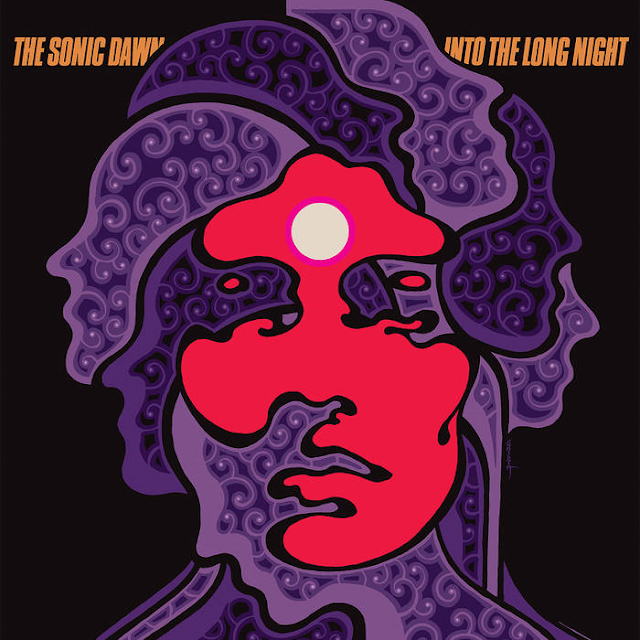 After a brief 33 second intro, interestingly entitled "Intro", featuring backward guitars, disembodied vocals and shimmering noise, we arrive at "Emily Lemmon" a stunningly beautiful mix of acid folk and psych rock enhanced by reverb soaked guitar colouring layered over a backdrop of sympathetic bass and drum rhythms around which Emil Bureau (vocals, guitar, sitar, recorder) wraps warm clean mellow vocals. The songs groove climbs and dips on a glorious rollercoaster of psychedelic dynamics that in places recalls John Cipollina's Quicksiver Messanger Service in others Roger McGuinn's The Byrds. "On The Shore" continues in much the same vein but this time around those Byrds vibes are pushed further to the fore. Jonas Waaben (drums, assorted percussion, backing vocals) lays down a funky jazz like backbeat perfectly supported by Niels 'Bird' Fuglede's warm liquid bass lines over which Bureau delivers a mixture of wah drenched and chiming guitar colouring as well as providing another warmly effective vocal.  "As Of Lately" raises the tempo and sees Bureau getting a little grittier vocally as he channels the spirit of Dick Dale through his guitar, reverb drenched notes hanging in the air, dripping with echo over Waaben and Fuglede's insistent rhythmic foundation. "Six Seven" and "Numbers Blue" finds The Sonic Dawn finding their "mojo" and injecting a little bluesy swagger into their trippy acid grooves with the former a slow blues enhanced by subtle keyboard colouring (courtesy of Eric "Errka" Petersson) and the latter a psych drenched, acid tinted country blues taken to another level by a guitar solo not dissimilar to that of Roger McGuinn's on The Byrds iconic "Eight Miles High". Next tracks "Lights Left On" and "l'Espion" finds the band mixing introspective Lennon and McCartney type vocal melodies over mellow psychedelic grooves touched by elements of jazz-like fusion. "Summer Voyage" raises the mood and jams a groove that takes in influences from both eastern and western  musical culture, the song taking off on psychedelic voyages of discovery with Bureau singing achingly beautiful melodies while swapping between sitar and traditional guitar, his stringed forays superbly backed up by Waaben and Fuglede's intricate rhythmic accompaniment. 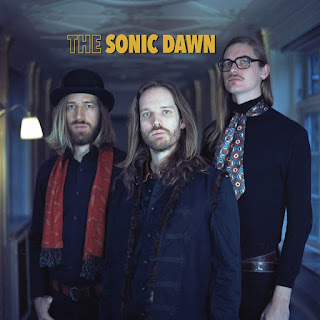 Heady, trippy with a big 60's vibe The Sonic Dawn's "Into The Long Night" references that early "West Coast Sound" so loved by many but is not defined by it, the band add a 00's twist to those lysergic grooves of old and bring them up to date for a new generation,
Check 'em out .....